Looking for the ultimate escape from the masses? The waters off of Nice and its neighbouring towns are full of unique dive sites.

A sizzling hot summer in the city… crowded Mediterranean beaches… and then there is having to wear that pesky protective mask that everyone loves to hate! Luckily, there is a way to escape all of that. A couple of hundred metres from the shores of the Baie des Anges, there is a world that few know from own experience. Oh but wait, you will need a mask after all, one for scuba diving, because we are taking you underwater to some of the most spectacular dive sites France has to offer.

A mildly scholarly preamble helps to better understand the uniqueness of the location: the quasi absence of a continental shelf around Nice with its sudden and dramatic drop-offs, some of which go down more than 150 metres, have given the region a reputation for difficult, even dangerous dives. But that is not necessarily the case. The most remarkable fact though is the existence of marine fauna that should only be found much further out. This specificity did not go unnoticed by scientists who, as early as 1880, set up a laboratory for oceanographic studies in Villefranche sur Mer, and which also served as one of the incentives to build Monaco’s Oceanographic Institute and Museum at its present site. 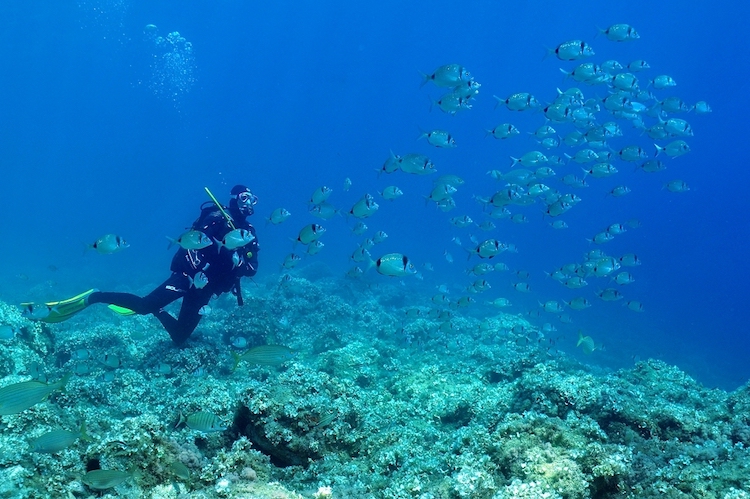 And finally, the coastal morphology offers another bonus: it is possible to dive in almost any weather, year round. The best times are usually May to September but given that the water is never colder than 13°C (55°F) and visibility is excellent even in the midst of winter, it is really a year-round spot.

If you look at the topography of Greater Nice, made up of hills and mountains, you know what to expect in the four main dive zones of Cap Nice, Villefranche Bay East, Villefranche Bay West and Cap Ferrat: an underwater landscape that resembles its terrestrial counterpart. Villefranche Bay, nicknamed Bay of Legends, features the deepest point, going down to 150 m below. Its sheltered geographic location between Cap Nice and St. Jean Cap Ferrat also protects it from winds. Unsurprising therefore that Villefranche is where freediving champion Guillaume Néry training ground and the venue of the 2019 freediving world championships. 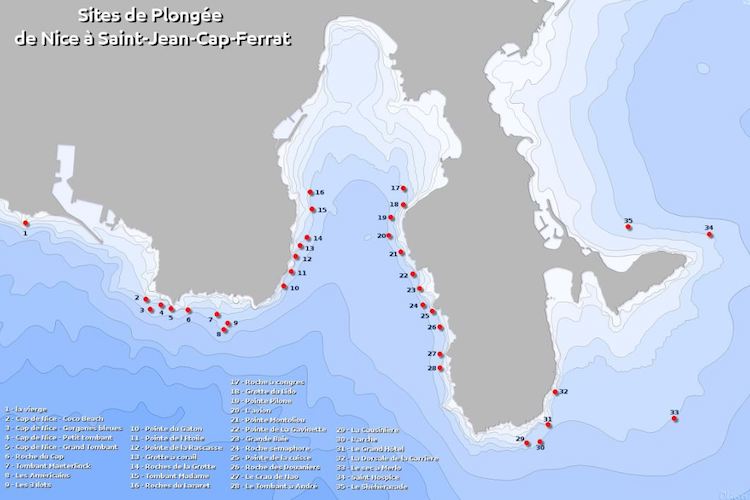 This map, covering the Bay of Angels from Nice to St. Jean Cap Ferrat, by way of Villefranche, already gives you an impressive idea about some of the many sites to explore. To give you a starting point, Olivier Le Corre and Jonathan Savage, two experienced divers and accomplished underwater photo/video artists, have shared some unique and readily accessible sites. Graded for difficulty from beginners to experts, here are their picks:

Even though this is THE dive site par excellence for your initiation, it offers varying levels of difficulty. The shallow depths from 2 to 9 metres, covered with fields of posidonia seagrass and teeming with fish, make it ideal for first dives and beginners. The classic Mediterranean marine dwellers, from sole to bream and octopus, are found here, but this is also the perfect spot to glide among a school of anthias or to admire the gorgeous gorgonian corals in all their festive splendour. But then the plateau ends with an abrupt staircase drop from 20 to 60 metres, definitely reserved for experienced divers only.

This pleasant dive off of Villefranche Est hosts the greatest variety of marine species and often reserves beautiful surprises. Several divers have encountered mantas there, hence its other name “Tombant de la Manta”. It is also home to moray eels, scorpion fish, lobsters, forkbeards, octopi, Dalmatian Doris nudibranchs, and small fixed fauna. A small underwater cross has been deposited there in the northern part but has recently disappeared. The crystal clear waters here filter sunshine from the surface like through a magical prism. 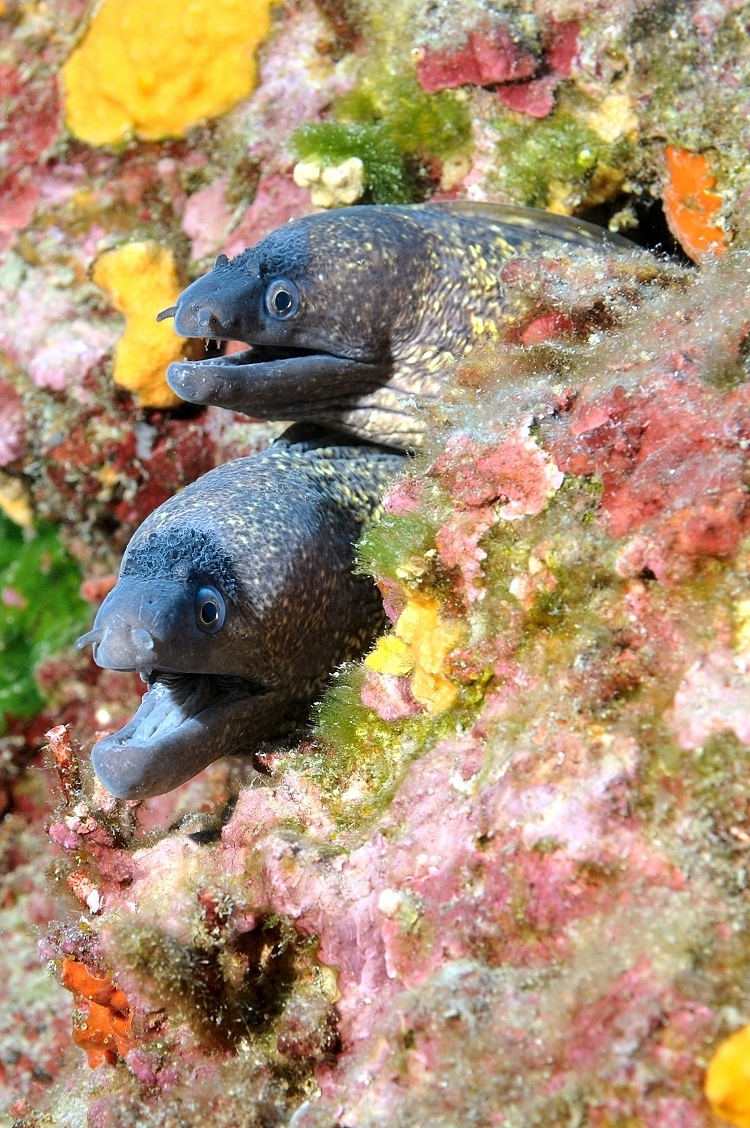 Although definitely accessible and enjoyable for beginners and intermediate divers for its abundance of barracuda, groupers, and sea breams, this site offers several plateaus of increasing technical difficulty. At the very tip of Cap Ferrat there is a drop-off perpendicular to the coast of up to 45 metres, and further offshore, another one, parallel to the coast, which descends to a cave located at 65 metres. This site, on any level, is rarely done by dive clubs due to hazy visibility but the rich marine wildlife is still an experienced underwater photographer’s dream.

Unique Sites: Of Art and Artefacts 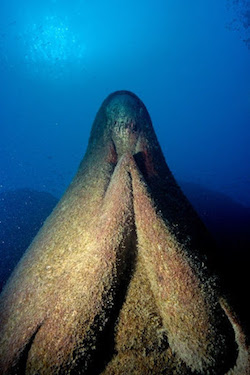 The Virgin is a manmade statue placed on a large rock, named Seiche de Nice, at a depth of about 12 metres just across from the Monuments aux Morts in Nice. Sculpted by Alfred Gualtierotti, it was submerged in 1968. This is a popular and easily accessible spot to visit – even underwater weddings have taken place here.

More experienced divers can continue under the statue to about 35 metres below sea level to visit caves that shelter sars, conger eels and moray eels. But proceed with caution as all too soon you’ll hit the sudden drop-off to 70 metres. Sediments from Nice’s Paillon river make these waters quite murky… and maybe that’s for the best: Rauba Capeu has historically been a Niçois rubbish dump. This has left the area around the Virgin covered with all sorts of debris, most of it dating back to the early 20th century.

Wrecks at your Toe Tips

The French Riviera with its 3,000 year history going back to Ancient Greece has always been an important Mediterranean sea trade destination. The waters off the coast, however, are not the easiest to navigate, and over time the sea floor has become littered with shipwrecks and even the occasional wreck of a light aircraft. Renowned UK-based videographer Jonathan Savage has captured several such dives.

One of them is the site just off the coast of Cap Ferrat where a light aircraft plunged into the sea several decades ago. Parts of the wreckage can still be seen and explored at a depth of 48 metres. A little further up the coast, in Monaco, is the final resting place of Le Toulonnais, a tugboat that had lain submerged in the Port of Monaco since 1991 at a depth of 30 meters and then was moved to the foot of the Musée Océanographique in 2014. It is destined to become an artificial underwater reef for the local marine flora and fauna, but also serves as a research and exploration site for divers, scientists, and the young generation.

On all your dives along the Mediterranean seashore, you’ll encounter an abundance of marine flora and fauna, and with some luck even the occasional shipwreck artefact. But increasingly, other and much less desirable objects float through the waters and rest on the sea floor: Styrofoam packaging, aluminium cans, bottles, sunbathers’ “souvenirs” like goggles, swimwear, and plastic sandals, plastic bags, cigarette butts, discarded litter from boats, and as of recently, single-use Covid protection masks, all of which contain materials that do not break down organically.

Allow us therefore yet another appeal to your good senses: These discarded objects greatly pollute these precious waters. They are detrimental to ocean health, to the health of the fish and seafood that might well constitute your next lunch, and even your own health, as nature is a circular “economy”. By all means, have fun, enjoy your day on the beach, discover the many riches of the Big Blue – but we count on you being responsible and respectful of the people and the habitat around you.

Scuba diving is a sport that requires its practitioners to be in great physical shape. Please be sure you are healthy before you ask Roberto for your fins.

Also, for your safety and that of others, try to privilege group dives organized and led by experienced and professional divers. There are many small dive clubs and operators along the French Riviera who offer underwater excursions – just make sure they are an established and serious business with a good track record of safety. In the Villefranche area we recommend Rand’eau évasions which holds several official distinctions including the 2020 Pro’certifié seal and the Quality Tourism label. The company also organizes volunteer dives to pick up litter from the seabed.

A special Thank You to artistes extraordinaires Olivier Le Corre and Jonathan Savage (do check out his Instagram) for generously granting RIVIERA BUZZ permission to reproduce their artwork.

Lead image by Mika Brandt on Unsplash; all other photos as credited