23 years after its creation, the mythical sport returns once again to the place where it was created. A rare opportunity to watch elite apneists compete.

Freediving may be as old as the relationship between man and water itself. But when Luc Besson masterfully portrayed the legendary rivalry of freedivers Jacques Mayol and Enzo Maiorca in his 1988 cult movie Le Grand Bleu, he didn’t know that he would become the spiritual forefather of a professional sport which eight years later would see its first world championship in the Bay of Villefranche-sur-Mer, a stone’s throw from Nice.

The 2019 edition of the AIDA World Championships returns once again to its birthplace from 2nd through 15th September, structured as an environmentally-friendly event with a declared agenda of protection of sea and oceanic environment. 137 divers from 47 countries compete individually in three disciplines: constant weight, constant weight without fins and free immersion. Freedivers announce the day before the depth they expect to reach.

The first days are dedicated to training and safety awareness. The day-long opening ceremony on September 7 includes a welcome parade of nations and a screening of Le Grand Bleu in the presence of actor Marc Duret (Nikita, La Haine, Outlander, Borgia) who also starred in the movie as Enzo’s younger brother (“Roberto, mio palmo!”). The actual competition starts on September 8. 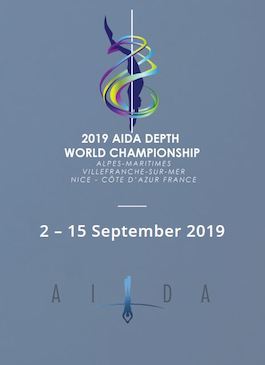 When AIDA (Association Internationale pour le Développement de l’Apnée) was created in the early 1990s, its declared goal was to modernize freediving, introduce safety standards, and gain worldwide exposure and recognition for an underrated high-performance sport which pushes its athletes to their physical limits. And at the forefront then and now, Claude Chapuis, one of the Alltime Greatest divers. Under his stewardship the organization has accomplished its objective, and the annual world championships, always anticipated with great interest, are testimony to the respect the sport has now gained.

In 1996, a 14 year old Niçois, watching the first apnea world championships, was so impressed that he would take up the sport and later become on one of the heroes of freediving himself: Guillaume Néry. Several years after his accident-related temporary retirement in 2015, the double world champion (-138 m) now returns to competition for the first time. He and his wife Julie Gautier, a diver and underwater artist in her own right, became some of the most widely respected global ambassadors for apnea over the past 15 years. They are also the makers of several underwater-themed short films, some of which will be screened during their opening ceremony on September 7.

Few outsiders know that professional freediving has an annual global circuit much like tennis or F1. Its champions are considered among the highest-performing athletes in the world and can score lucrative product endorsement contracts. But the Number One concern is safety. Still, fatal accidents do occur. The other problem is the lack of financial support from corporate sponsors and the public, and organizers have to make do with relatively modest means. On its website, AIDA offers a great and detailed insight into its fascinating history, its remarkable champions, and its safety-first based philosophy.