It is an institution and the much beloved first highlight of the Principality’s annual social calendar: the Monte-Carlo International Circus Festival. Created in 1974 by H.S.H. Prince Rainier III of Monaco, it has since become the largest and most prestigious circus event in the world. Organized and presided by H.S.H. Princess Stéphanie of Monaco, the Festival presents a selection of the best international acts and is broadcast around the globe. It is also the forum for the “Golden Clown” (Clown d’Or) award, the most respected prize in this colourful artistic discipline. This year the event takes place from January 18 through 28.

Whilst the Monte-Carlo Circus Festival aims to highlight traditional circus, it is also a place for creation and innovation, which has instituted a New Generation competition for young circus artists. This year’s seventh edition takes place on February 3 and 4, the weekend after the main event.

But if the Festival International du Cirque is a spectacular festival any given year, 2018 is a particularly important year. Modern circus as we know it was born in 1768, exactly 250 years ago. To pay tribute to its creator Philip Astley, who had a genius for trick riding, the famous Monegasque Fontvieille ring invited the best “Equestrian Pas de Deux” in the history of modern circus, featuring Jozsef Richter Jr. and his wife Merrylu Casselly.

The equestrian couple is also the winner of one of the two 2018 Golden Clown trophies for its “Exotic Post” number, featuring African animals not often found in the ring, including zebras, camels and giraffes, while the other one goes to the world-famous Shanghai Acrobatic Troupe for their show which is as acrobatically skillful as it is poetic.

Circus has in recent years been in the crosshairs of vocal animal protection groups, seeking to ban animals from the ring. But Princess Stéphanie of Monaco thinks otherwise. “In Monaco, animals are considered to be artists and part of the great circus family…. The critics do not come and see for themselves how the human artists live with their animals. They dedicate their lives to their animals, 24 hours a day, with not a day off. They would give their lives for their animals…. No matter how many petitions they make, I will fight till the end that circus continues to feature animals. It has been a part of our cultural heritage.” 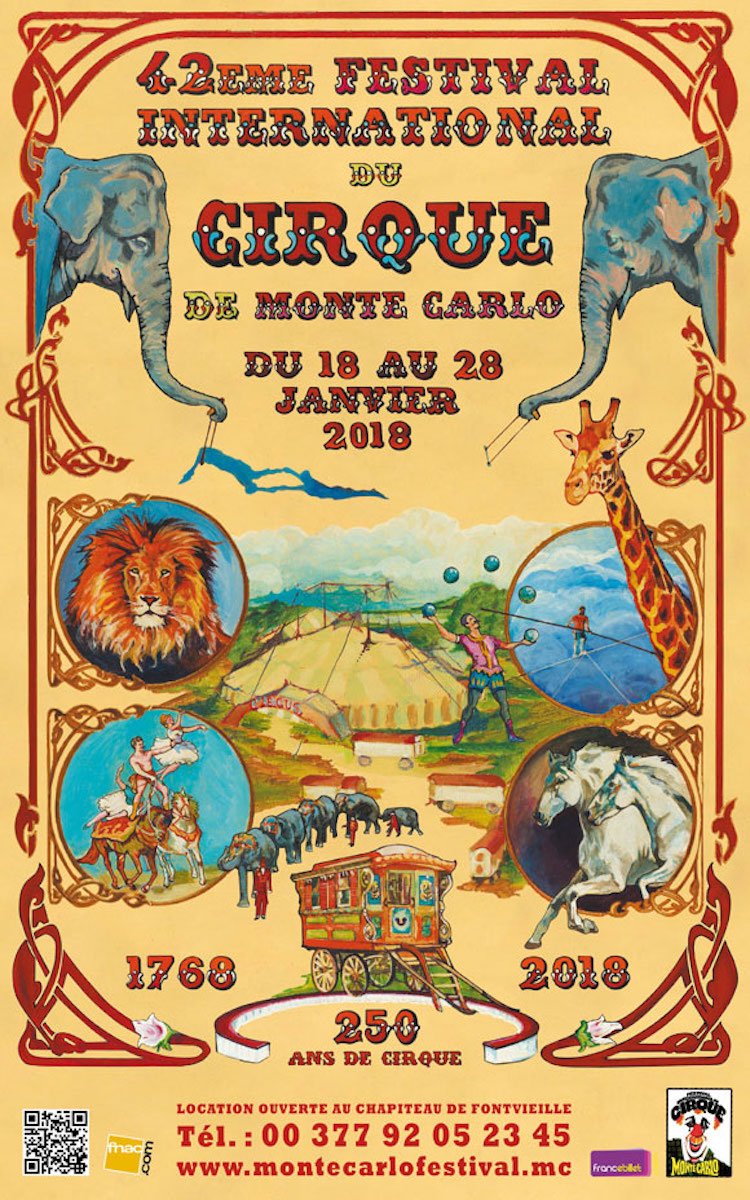 Drawn to the circus since first serving on the Festival jury at age 9, Princess Stéphanie has devoted much of her time to preserving the circus tradition for future generations. In her capacity as president of the Festival International du Cirque de Monte-Carlo, she oversees the entire operation from the selection of acts to the choreography, costuming, music and lighting that bring together the competition and gala shows so beautifully. She is also actively involved in planning the circus-themed events that occur during the Festival and is often joined by H.S.H. Prince Albert and other members of the Grimaldi family.

The full programme for the festival is available on the official website. Tickets may be booked online, by phone or at the Fontvieille Big Top box office. Box office opening hours: every day 10am-1pm and 2pm-8pm. Ticket Hotline: +377 92 05 23 45.