The world of music has just suffered yet another painful loss. Hugh Masekela, the international icon dubbed “the Father of South African Jazz”, has died aged 78.

Once in a generation, there is a musician who excels over his peers, who transcends boundaries and borders, who writes legends, and whose life is an endless source of inspiration on an artistic and human level. South African jazz trumpeter Hugh Masekela, with his inimitable Afro jazz sound, was one of them. After a professional career spanning 55 years and every continent on Earth, he now passed away on January 23, aged 78, from complications of his long battle with prostate cancer.

Many would see him not only as one of the most influential South-African musicians of the 20th and 21st centuries but also as an anti-apartheid fighter by the sheer force of his music, becoming an artistic symbol in the nation’s equality movement of the late 1980s and early 1990s.

Born in Kwa-Guqa Township, Witbank, South Africa on April 4, 1939, his musical talent showed early, and he picked up his first trumpet after watching the movie Young Man with a Horn (in which Kirk Douglas plays a character modelled on American jazz cornetist Bix Beiderbecke). Ever since his teenage years, his music closely mirrored his life experience as a Black boy and man in a White-dominated society. The struggle and racism he was exposed to inspired and influenced him to make music and also spread political change, even though he long denied that his music carried subliminal messages. In the wake of the 1960 Sharpville massacre and the increasing brutality of the Apartheid regime, he left the country, spending several years in England and the US. In 1964, he married prodigious South African singer Miriam Makeba. While the marriage dissolved after only a couple of years, the two artists would keep amicable relations and continue to co-produce chart-topping music. Their “Soweto Blues” became a fanfare for oppressed South-Africans living in the Johannesburg slum and beyond.

Immensely popular for his joyful personality and self-confessed human flaws – he struggled with drug addiction for many years -, and forever open to reaching out across borders and genres, Masakela played with many of the greatest international performers, including The Byrds, The Dave Matthews band, Ladysmith Black Mambazo, Johnny Clegg, Fela Kuti, Dave Koz, Paul Simon (on the singer’s Graceland album), and countless others. Masekela’s song “Bring Him Back Home”, which he wrote in exile, sparked and accompanied the movement to fight for Nelson Mandela’s freedom. As one of South-Africa’s best known artistic representatives in the world, he was also the much-cheered opening act at the 2010 FIFA Soccer World Cup Kick-Off ceremony in Johannesburg’s Soccer City stadium, watched by billions of TV spectators around the world. 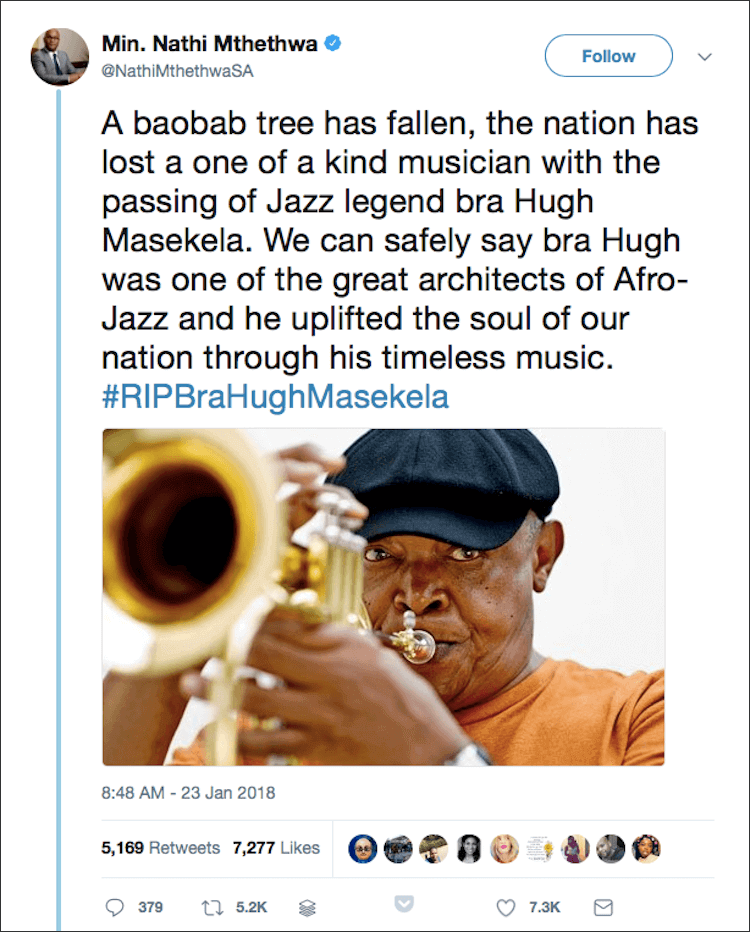 One of the legendary jazz trumpeter’s last recordings was titled, “Heaven in You”. From hereon in, his fans, grateful for the musical and human inspiration this once-in-a-generation personality provided, will be rearranging the lyrics to “Hugh in Heaven”…