A multi-talented artist, and one of the most famous exponents of the L’École de Nice movement alongside Cesar, Arman and Ben, Patrick Moya is to be found just about everywhere on the Côte d’Azur.

His artwork can be found at the MAMAC and local galleries in Nice, while the modern frescoes he designed for the chapel Saint Jean-Baptiste in the little village of Clans in the Tinée valley to interpret the story of the famous saint represent characters that are in reality self-portraits of the artist himself. Recognition for a man who lives in his own artistic universe and who is now being celebrated with a retrospective of his work at the newly opened Galerie Lympia in the Port of Nice.

Paintings, sculptures, ceramics, digital images, 3D movies, live performances … Moya has done it all in a career that spans 40 years, often finding inspiration in popular shows, such as the circus or the Carnival of Nice. As journalist Florence Canarelli wrote in a book dedicated to the artist: “Moya’s universe is both enchanted and slightly perverse.” 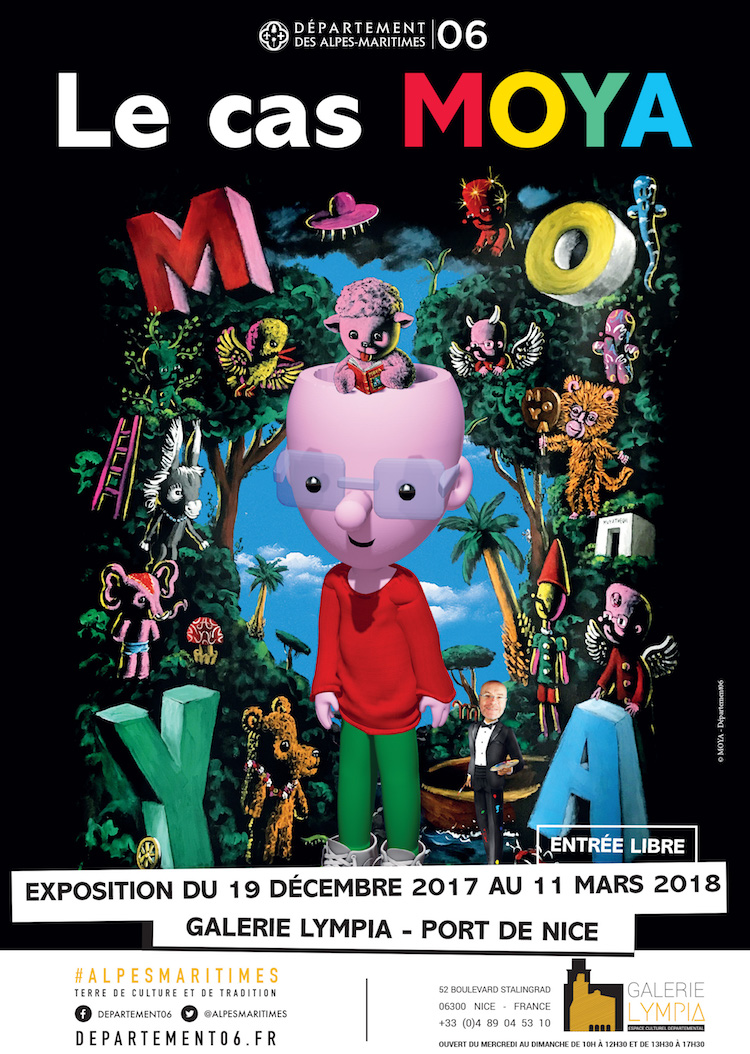 With the dream of “becoming a Creature instead of the Creator”, the multifaceted artist who was born in 1955 in Troyes, started working with the letters of his last name to tag anonymous images before inventing his alter ego, “Little Moya”, a cross between himself and Pinocchio. Soon after, he created “Dolly”, a little sheep that became the mascot of the now famous techno “Dolly parties”. And if that was not enough, Moya is now the owner of a virtual “Moya Land” in 3D, made of colourful characters that include teddy bears, flying elephants, winged devils and drag queens, and which is now traveling the world. In 2009, an entire room of Florence’s Museum of Anthropology was devoted to the “Moya Civilization”, while Italian critic Marion Gerosa dubbed him “one of the great pioneers of the digital universe”.

A bit narcissistic? Probably, considering the numerous avatars of Moya that now exist in so many forms in his works. Optimistic, playful, and poetic? Definitely, when looking at his back catalogue; a catalogue that can be discovered and enjoyed at the Galerie Lympia until the 11th of March.