The three regional flagship theatres present very different programmes, but all share a general theme of lightening the sombre mood.

Every year, theatre lovers await the month of June with great anticipation: it is the time when the programmes for the upcoming season are revealed. Their patience has just been amply rewarded. The three leading regional theatres – Théâtre National de Nice, Anthea Théâtre d’Antibes and Théâtre de Grasse – have each announced a rich season that once again underlines the importance of the role theatre plays in our daily lives as the stuff which not only dreams are made of but which has the power to reach out and unite.

While Irina Brook does things the Irina Brook way, which also means that the Niçois will have to wait until 10th September for the formal presentation of the new season, the TNN has at least already issued an overview of what’s on tap for those dying to know. Plagued by the government’s severe cultural funding cuts, the Centre Dramatique National de Nice is trying to find a formula somewhere between its artistic director’s well-known penchant for engaged theatre at the crossroads of influencing society and overhauling classics on the one hand, and playing it safe enough for the lovers of traditional theatre on the other. The result is a mix that, compared to Irina Brook’s riskier second season, is overall tamer and aims to keep the current audience happy, while reaching out to those who prefer a more classical repertory. Plenty of musical shows and plays geared at the young audience ensure that the overall tone continues to be light and playful. 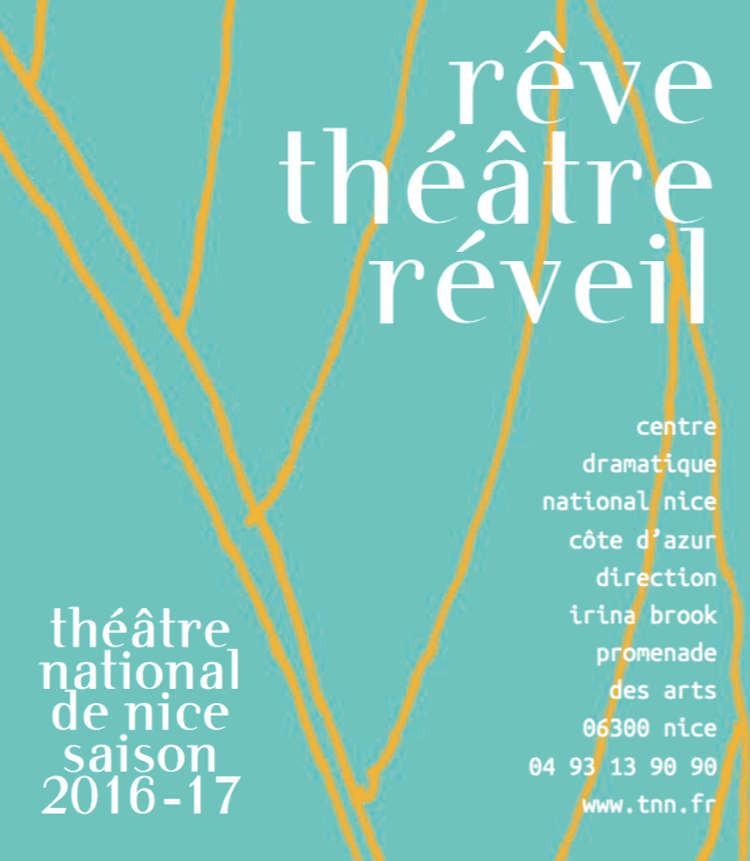 On the playbill, we find those names of Irina’s inner circle who we have become familiar with over the past couple of years, like Peter Brook, Dan Jemmett, Romane Bohringer, Hovnatan Avedikian, or Renato Giuliani, to name but a few … theatre practitioners who collectively once again bring contemporary human and humanitarian issues to the forefront. In a bow to classical theatre made over with a fresh new flavour, there is Tolstoy’s Anna Karenina, which opens the 2016/17 season on 17th November in a much-noted production by Gaëtan Vassart which has been hailed by critics and the audience around France earlier this year. Of course we also have the third edition of the Shake Nice! festival which Irina instituted upon her arrival, which this coming season puts the emphasis on contemporizing some of the Bard’s lesser-known plays. Doubtlessly the highlight: the Ballet de Monte Carlo’s guest performance of “Songe”, based on Midsummer Night’s Dream.

And much to the local audience’s delight, a couple of Niçois companies have also made it on Irina’s shortlist, among them Compagnie Miranda around Thierry Surace, who will present their overhaul of Molière’s Dom Juan, a “clownified” version which has successfully toured the country for the past couple of seasons and is a staple at their own house, the Théâtre de la Cité. And Felicien Chauveau’s troupe La Machine takes on Don Quixote in a tragicomic version which proves why this company is rapidly becoming one of the leading ones in the region. Not to forget of course, Irina’s “local” company, Les Eclaireurs, a homegrown troupe of TNN drama students and an extension of sorts of her Parisian “Dream People” company. A name to note among the TNN bunch: Irène Reva, who has all the talent and motivation for a great national and maybe international theatre career. 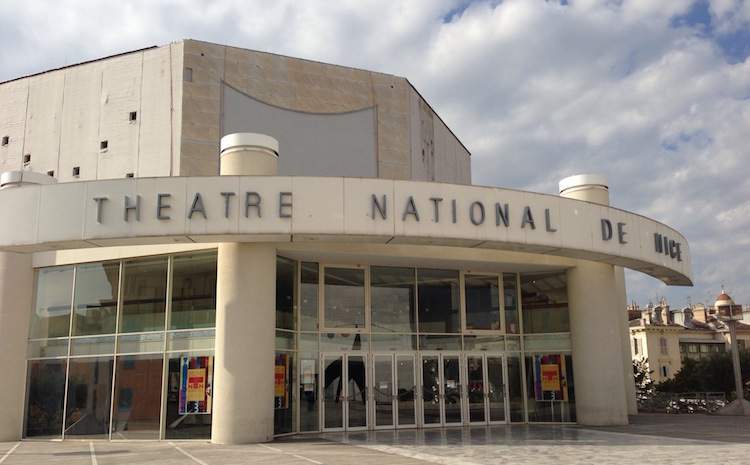 No TNN season would be complete without Irina Brook’s own creations and direction, and this year she works twice with Stefano Massini (Point d’Interrogation and Terre Noire) and Lina Prosa (Lampedusa Beach), dedicated to issues dear to the Brookian heart, such as environmental or humanitarian ones.

If this year’s TNN season starts a bit later than usual, it is due to the two-week long theatre festival in Nice in the second half of October, in which the National Theatre plays a central role. For an overview of the currently scheduled shows, check the TNN website, and be sure to follow the TNN on Facebook where impromptu events across town are often announced on short notice.

When a relatively new theatre has managed to attract over 270,000 visitors in its first two seasons, has sold over 10,000 season tickets right out of the gate for the third year, and has to keep adding shows upon popular demand, you know it is doing something right. The secret to its success is not such a big secret after all: the Daniel Benoin and Vincent Brochier tandem brings Paris, London, New York, and the rest of the world to the doorstep of the French Riviera, in a perfect kaleidoscope of classical and contemporary theatre, opera and jazz, dance and folklore, circus and acrobats, readings and humour … in short, a firework of the performing arts across genres, cultures, and time, and often with an intellectual flavour.

The anthéa is where Diderot and Balzac, the Vietnamese National Circus and the Ballet Nice Mediterranée, Gad Elmaleh and Fellag, Les Blondes and the Michel Jonasz Quartet, and Fabrice Luchini and Jean-Michel Ribes cross paths. It used to be that Paris had the honour of presenting the Best Of French Theatre first, but in recent years, more than just a few top creations were Made In Antibes, and then promptly requested by Parisian playhouses.

Daniel Benoin understands the importance of grooming local talent, chief among them Collectif 8 and Collectif La Machine – with a special shoutout to the extremely gifted Eva Rami whose Vole! must not go unnoted! – who under his wings are poised to become leading national companies. And needless to say that in one of the “must” events of the season, the maestro himself presents his annual creation, directing his adaptation of Stephen King’s novel “Misery”.

You recognize a good theatre by the clearly legible signature of its director, and Jean Flores has put his on the TDG for 25 years – yes, this is his quarter century milestone year! – making it a nationally respected temple of the performing arts. His Spanish-Northern African roots, his passion for diversity, and his staunch rejection of religiously or socially motivated intolerance and violence are the hallmark of his new season.

The TDG 2016/17 programme is a celebration of coming together, of breathing for a moment, of sharing, and of culture at the nexus of cultures, with a strong emphasis on dance, music, and humor. Talent gets lots of opportunity to showcase its abilities, and even horses make the playbill in a spectacular choreography of two Ballet de Monte Carlo dancers and their equine partners. But there is plenty of room for sophistication, for instance the monthly livestream of some the world’s greatest operas straight from the Met in New York, a pillar in the programme which was already a tremendous success this past season. 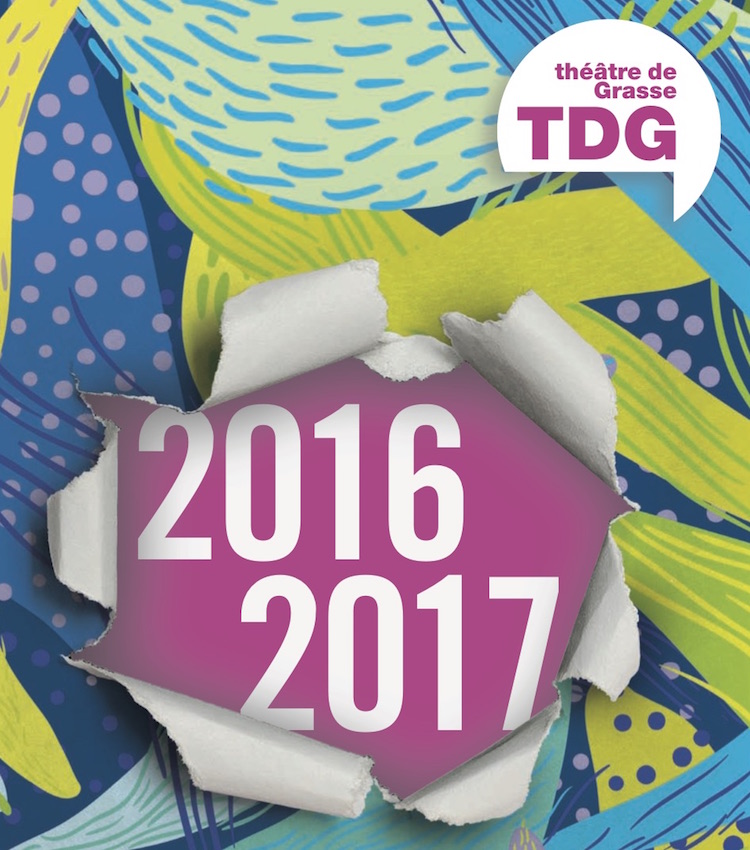 Jean Flores is a born mediator and tireless advocate for unity across borders and other manmade limitations. And once again, this is reflected in the new season of the theater that is considered the most original and the one closest to its audience.

The Théâtre Municipal Francis Gag’s programme has not yet been announced at time of press but we will of course keep you posted as it becomes available.

A stellar, extremely creative season all throughout the Nice-Antibes-Grasse triangle is on the cards, especially given the ever-decreasing funds for culture. If we have one ongoing disappointment though it is that once again the sizable non-French speaking community of expats and tourists is getting underserved, being limited to dance, music, and circus, rather than being able to enjoy the richness of French and international theatre, literature and humour presented in foreign languages.

In this cosmopolitan area, and with a city leadership that aims to make Nice a premier global destination for tourism and business, we hope that artistic and administrative theatre directors eventually take action on this desire – even need – to be included in the entire wealth of cultural life, as has been common practice in other countries for many years. In times where there is so much talk of uniting, of coming together, of inclusion, this would indeed be a great signal of the commitment to arts and culture as a universal peacemaker.