A play that fearlessly mixes ancient literary heritage with contemporary cabaret? A travelogue, a dream, a love story? – A success!

Adapting a classic Greek play into a thoroughly modern cabaret version is an art in itself. Touching little old ladies’ hearts with it is an even greater one. That’s what director Thierry Surace and his Compagnie Miranda managed with Odyssey Burlesque which is playing at the Théâtre de la Cité in Nice this weekend.

Unsurprisingly, Odyssey Burlesque is rooted in Homer’s timeless saga, telling the tale of Ulysses’ trials and tribulations as he travels the seas, resisting Calypso, facing Cyclops, and tackling seemingly unsolvable tasks, while his faithful Penelope awaits him back home. Yet, Nice’s creative Compagnie Miranda, under Thierry Suraze’s direction, has given the Greek myth a fresh, new, whimsical twist. Here, we learn that Ulysses wasn’t the tough hero we all think him to be but a man somewhere between tearful emotions, homesickness, and anger, one who cries when no one is looking. A regular guy who wishes he had heeded what Poseidon, the barman at his local waterhole, told him, “Ulysses, stop drinking and go home.” Interweaving literary roots and fantasy, the ensemble unabashedly jumps between genres and realities, not afraid of lending it a distinct flavour of cabaret, of live-sung music-hall, but always successfully treading the fine line between emotions and burlesque, and respecting the original text.

But for all the spotlight on Ulysses, it is a love story, told from Penelope’s perspective whose unwavering love accepts her not-quite-so-heroic hero for the flawed man that he is. In fact, the support of all the women in Ulysses’ life is what gives him the strength to go through his adventures.

The play, filled with joy, fun, poetry, emotions… somewhere between laughter and tears… leaves its mark on the public, and sometimes in deep and surprising ways, as Thierry Surace found out. After a recent show in Paris, he was told that someone was waiting to see him. When he went out, a little old – actually, very old – lady was there, deeply moved by the spectacle she had just witnessed. “I really never wanted to go see the Odyssey because it’s too serious, but thanks to you, I have just relived a precious moment of my childhood. Your play brought back cherished memories,” she told him. “My grandfather used to tell me bits and pieces of the story, composing it little by little into the entire saga, as analogies as we were facing the Nazi horrors. That’s how we kept standing upright.” Thierry is still deeply touched, eyes welling up, when thinking back to the little old lady. “It was one of my most beautiful experiences ever,” he shares with us.

Since its creation in 2012, L’Odyssée Burlesque has played all over France with great success and to excellent reviews. From November 21 to 23, it is on the playbill of the Théâtre de la Cité. Tickets cost from €9 and may be booked online or by calling 04 93 16 82 69. 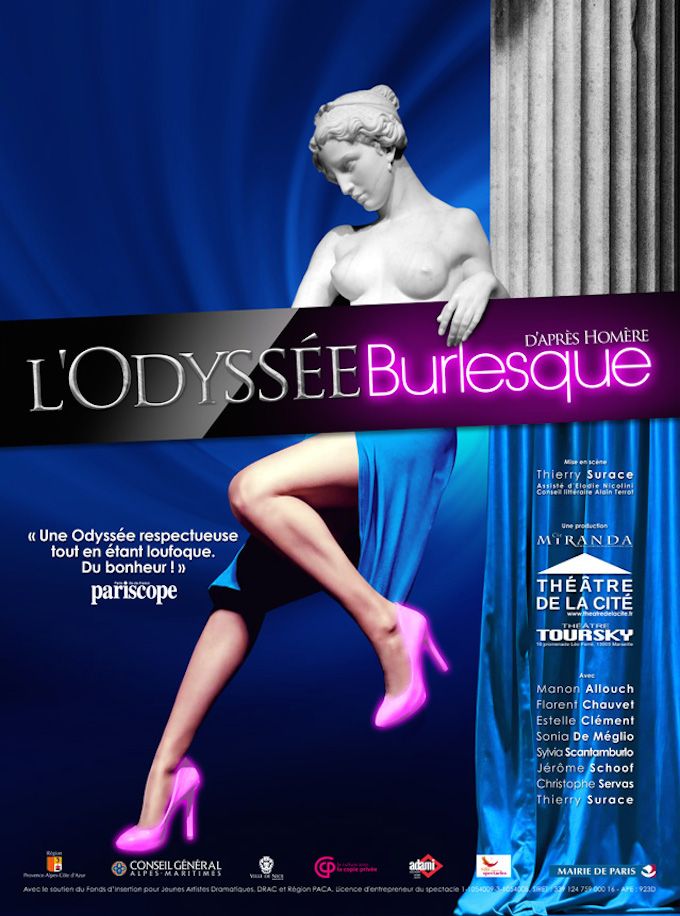