Big international artistic productions find their way to a small town in the Niçois hinterland every week, thanks to one determined man.

The quaint little hillside town of Grasse, just a hop, skip, and jump outside Nice and home to 50,000 residents, is famous the world over for immense rolling lavender fields, its perfume industry, and Jean’s House. In any guide book, Jean’s House is officially listed as the Théâtre de Grasse but under the 20+ year leadership of Jean Flores, it has acquired such a stellar international reputation that these two names have become entirely interchangeable.

There is certainly no shortage of interesting theater programs on the French Riviera. Nice has its Théâtre National which is currently undergoing a Broadwayesque renaissance under Irina Brook, who favors plays with a poetic, playful edge. In Antibes, former TNN director Daniel Benoin has been able to steer many of his Niçois faithful in quest of a more traditional theatrical signature to his brand new Théâtre Anthéa. And then there is Grasse, and its director Jean Flores, and he and his programme cannot be filed under any other category than “eclectic”. In the very best sense of the word.

William Shakespeare, Victor Hugo, and Federico Garcia Lorca…. Opera, hip-hop, and music hall…. India, Brazil, and Senegal…. Theatre, dance, and circus….. they all find their way to the stage of the Théâtre de Grasse. Jean is a man who likes to push the artistic envelope, who is fearlessly avantgarde, who gets his inspiration from around the world. And yet, Jean is firmly rooted in Grasse where he has spent almost his entire life. From whence that interest to open up to fresh influences? 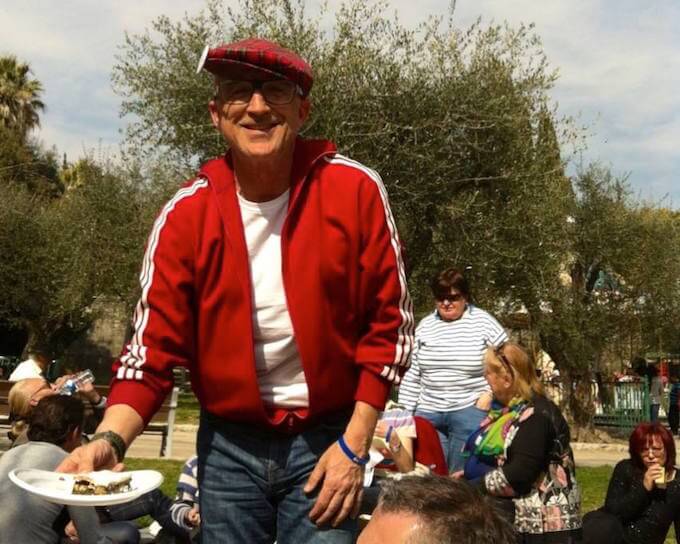 The Love of Foreign Culture Fairy stood by his cradle in 1957 when he was born in Oran, Algeria, into a bicultural Spanish-French family, and his Maghrebinian toddlerhood left its traces on young Jean when his family fled the wartorn country in the 1962 mass exodus. The Flores clan came to this side of the Mediterranean shores, and while many of his relatives ended up in Nice, his own family settled down in Grasse. Over the past half century the Perfume Capital of The World has been home to Jean but his early thirst for cultural diversity would never be quenched.

It may have been his father’s comedic talent – he used to entertain the extended crowd of Flores offsprings on the weekends, switching his daytime job of dental prosthesist for that of a clown – that first piqued Jean’s interest in the performing arts, way back in the 1960s and 70s. The Théâtre de Nice also did its part, where Jean watched shows ranging from Philippe Genty, the legendary puppeteer, to Pina Bausch and her contemporary dance programmes. But if these sparked an interest in the arts, he didn’t heed it. He became a grade school teacher instead, and worked in that fine profession for several years. Granted, he did mount a puppet theatre, Les Petits Castors, but just as another pedagogic and educational tool. He also had an interest and a talent for mediation in the socio-cultural arena, where his biculturalism came in handy again. And that was eventually noticed and called upon to work as a mediator, trainer, and animator in the school environment.

Then, in 1982, in the wake of a law to decentralize culture, the Conseil Général des Alpes Maritimes created several local job openings, and one of them was the post of deputy director to take care of all sorts of cultural events in the region: A traveling cinema circuit. The summer festivals. Classical musical concerts … Tailormade for Jean and his interests, and small wonder therefore that he was appointed. He loved it so much and did so well that a few years later, he dropped his career in national education altogether to dedicate himself to this venture fulltime. The result of his great work still exists to this day.

In 1987 the mayor of Grasse came knocking on his door. Would he be willing to take over the town’s cultural activities, from carneval to fireworks, from the flower convoy to the majorettes’ parade, and … well, also the local theatre, then still named CIG, Centre International de Grasse? What a question! Of course Jean jumped at the chance. And pretty soon, he was put at the helm of the Théâtre de Grasse fulltime, with full control of its artistic and cultural content.

That was in 1995, twenty years ago. And Jean has made a spectacular success of it, with a simple recipe: Respect tradition while adding a modern and worldly flavour. His programme is autobiographical in many ways…. a reflection of his own multicultural French-Spanish-Algerian origins, an expression of his love for traveling and the experiences he makes en route. His artistic signature containts elements from the countries bordering the Mediterranean Sea on either side, but also from far-flung places like India, China, or Brazil. Or Paris, where he is a regular at award shows – a sign of the respect the national Thespian community bears him. He likes to revisit classics and give them a contemporary twist, and many pieces are actually shown in Grasse before they make it to Nice. Yet, there is sufficient room for the kind of plays his more traditional audience would favour, and a good portion of entertainment for kids is also on the list. He also sends his own team out to perform, like earlier this year when he shipped them off on a three week tour to India. “What is important to me to convey is a message of altruism and opening to the world, mutual cultural enrichment. These past few years, with the political and social climate we have been exposed to, and the sinking morale, we French theatre directors, as the stalwarts of cultural education, have increasingly had a responsibility to awaken curiosity and nurture tolerance, and that is what I am trying to do. Even at the risk of sounding pretentious, I like to do intelligent work. We also have an increasingly international audience here in the region which is still looking for a cultural home,” Jean explains his motivation.

He is a dynamic driver of bringing people together, in more than just an artistic sense. He has also worked on developing a sort of cultural exchange programme within the region: “Instead of being competitors, it makes so much more sense if our smaller towns collaborate.” He is therefore collaborating with other regional communities, from Cannes to Monaco and even Marseille to coproduce shows, and he doesn’t neglect the seemingly smaller but practical details like bus shuttle services that take the public from one place to another. “To extend that network even further will be one of my next goals,” he tells us.

Meanwhile, closer to home, the 2014/15 season at the TDG is drawing to its end, and it is going out with a bang. The grand finale, which is actually happening in Mouans Sartoux from May 19 to 24 – faithful to Jean’s vision of spreading the love across the entire region – “Blast”, by Cirque Farouche Zanzibar, a spectacular show with 18 artists from all over the world. Acrobats, trapezists, tightrope walkers, clowns, and voltigeurs…. firing off a circensic firework merging acrobatics and stage art. A high point to an exciting season, while the next one is already in full preparation.

So, welcome to Jean’s House, where a cordial reception and a treat for your mind and soul is guaranteed.