Fans of history, culture, civilization, architecture, and archaeology have an unmissable date with their TV on October 23, 2020, at 9.10 pm (French time) when the last installment of “Mégapolis, les plus grandes villes de l’Antiquité” trains the spotlight on Rome’s millennial-old treasures. But this is not “just another Rome documentary”: Created by leading French filmmaker Indigènes Productions, this is storytelling at its finest: combining imagery of its current-day vestiges with never-seen-before 3D reconstructions, the film traces the ascent of the City on the Seven Hills to being the most dominant and influential Mediterranean city of its time.

At its peak Rome would be at the head of an empire of 90 million, representing half of the world population at the time. After Athens, Alexandria, and Tikal, Mégapolis Rome is the fourth episode in this series that examines how these cities came into being and how they attracted their contemporaries. How did they develop, what were their major architectural achievements, and how does their urban planning reveal to us the way the Ancients lived?

“I found Rome a city of clay and leave it to you a city of marble.” This quote, ascribed to Emperor Augustus (63 BC – 14 CE) very much captures the transformation that the capital of the Roman Empire underwent during that crucial period in world history. His vision of culture and civilization would leave an eternal imprint on the city. However, he was far from being the only master builder of Rome; rather, generations of contemporaneous rulers, architects, engineers, and artists in the centuries bookending Christ’s birth contributed to its unique, monument-studded appearance. 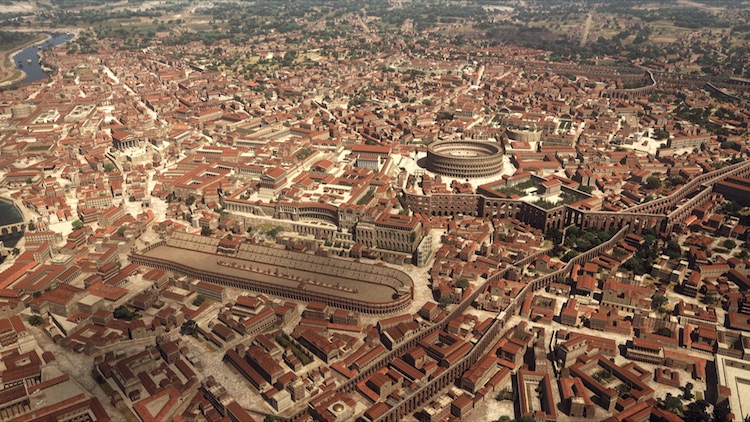 You cannot help but marvel at the ingenuity of these extraordinary builders two thousand years ago. No technology, no computers, no machines… instead every single one of the millions of steps to complete a building was the coordinated effort of brains and brawn.

Equipped with nothing but their sense of innovation and outstanding engineering skills, and powered only by human and animal muscle, the Romans created unequalled architectural masterpieces. Many of those have survived to this day, despite constant danger from earthquakes, storms, fires, wars, and – more recently – environmental threats. What helped though was the discovery of a building material during that era that would redefine the history of architecture: concrete.

The Mégapolis episode dedicated to Rome studies three of the city’s most stunning monuments:

The Pantheon – the largest in the world – was an incredibly progressive feat of architecture when it was built 2,000 years ago, combining a classical Greek-columned façade with a round dome which in its extension forms a perfect circle and is the largest of its kind in the world. To this day the Pantheon serves as a Catholic church. The splendid cupola with its revolutionary oculus has influenced and inspired architects over the centuries, from Brunelleschi’s dome in Florence to the Pantheon in Paris and the U.S. Capitol, to name but a few. 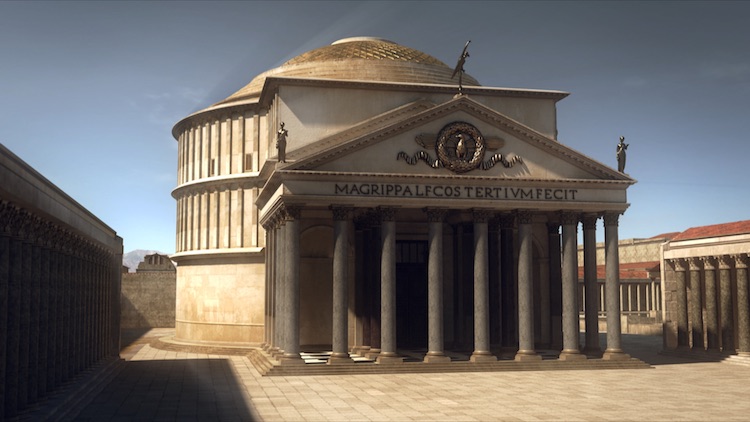 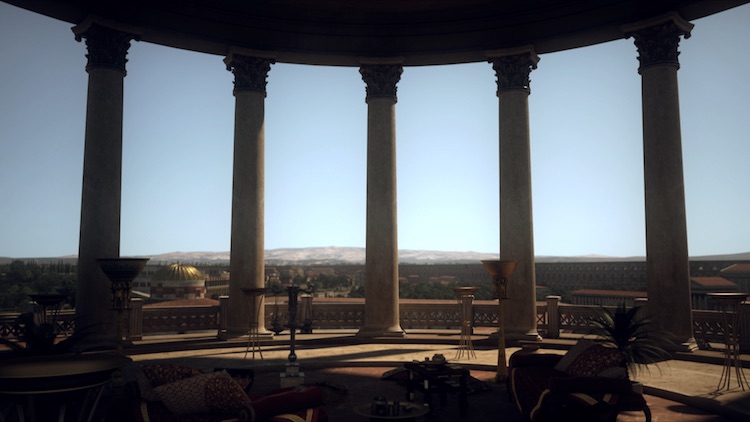 Nero’s majestic palace, which is no longer standing, once covered a quarter of the city. It was packed with technological innovations. A one-of-its-kind revolving dining room offered panoramic views over the entire city while guests were treated to perfumed scent clouds and flower petal showers. A little known fact about Nero is that although he well deserved the unflattering title of “Enemy of All Humanity”, he also did help save Rome from the devastating Great Fire of 64 BC that destroyed a massive portion of the city, and ordered it reconstructed to better safety standards.

The adjacent legendary Colosseum, the largest Roman theatre ever built and partly built over Nero’s defunct palace, once stood 12 stories tall and could hold between 50,000 and 80,000 spectators. Like no other structure it symbolizes Roman technological prowess and engineering that include heavy-load elevators, heating via waterpipes, public toilets, a hydraulic mechanism to flood the arena for a mock sea battle, and even a retractable overhang to shield spectators from the sun. A little known fact: as the Colosseum was partially destroyed in two earthquakes (but never torn down), parts of the old marble façade and other materials were “recycled” for the construction of St. Peter’s Basilica in Vatican City. 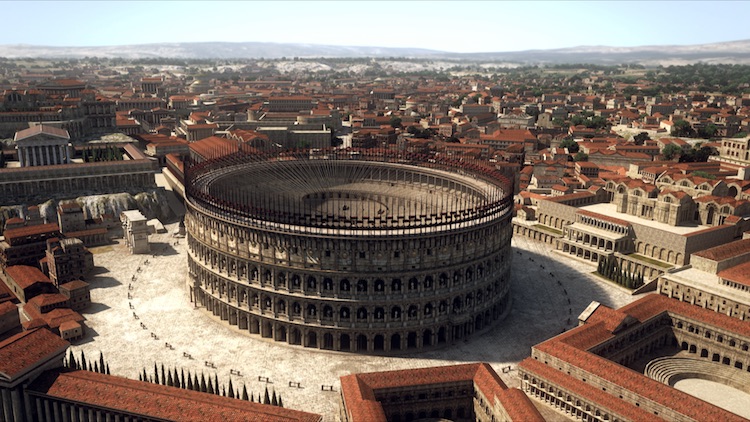 Indigènes’ stunning 3D recreations are accompanied by a wealth of facts and information, as well as expert commentary by renowned historians and researchers. In contrast to the series’ first three installments about Athens, Alexandria, and Tikal, the Rome episode puts the emphasis on construction rather than civilization, allowing the viewer to immerge in the gigantism of Imperial Rome. Indigènes’ CGI and 3D artists did a stellar job recreating and rendering a cityscape that surpasses the imagination, and the musical score composed by Olivier Lafuma perfectly complements the impressive visuals.

The history of Humanity is intimately linked to urbanisation and progress. Cultures may differ but cities have always grown and evolved driven by a shared, innate human dynamic – to improve one’s standing in society. “The series seeks to revive the first megalopolises of universal history at the time of their apogee, giving us insight into the life of their citizens at the time and the immense diversity of human genius,” principal writer Stéphanie Hauville of Indigènes Productions explains.

Paris-based Indigènes Productions specializes in high-quality historical TV documentaries combining 3D reconstitution, animation, fictional re-enactment, and expert commentary. Fabrice Hourlier, the creative-technical ace, and Stéphanie Hauville, writer and historic researcher par excellence, head a high-calibre team of CGI artists and 3D modelers. Renowned for the depth of their research and their cinematographic excellence, they cover topics across history’s epochs and central locations, from the heroes of the battlefields of ancient Greece to those in World War I, from Nelson’s victory and Napoléon’s defeat and to the transatlantic competition of two pioneering women pilots. Indigènes’ films enjoy an international audience, being most frequently shown on French-German ARTE TV, but also on public and private channels around the world as well as on Netflix and other premier streaming platforms.

Watch Mégapolis Rome on Friday, 23 October 2020 at 9.10 pm on RMC Découverte (channel 24 of TNT or 126 of Canalsat). The series will also be broadcast (in English where applicable) in Australia, Belgium, Canada, the Czech Republic, Germany, Italy, Liberia, Spain, Sweden, and the USA (show times to be announced). The first three episodes of Mégapolis – Athens, Alexandria, and Tikal – are regularly rerun online and on French TV.