Famed writer, director, and producer Fabrice Hourlier – founder of Indigènes Productions in Paris – has a knack for epic historical storytelling on TV. After Trafalgar, Le Destin de Rome, and Au Nom d’Athènes, he has tackled the events surrounding Bonaparte’s 1812 invasion of Russia which had such a decisive impact on Europe’s collective history. And by all accounts, with Napoleon, La Campagne de Russie, he has delivered a docufiction that we predict to stir up major excitement among Emmys jurors. So be sure to mark your calendar for January 10 at 20.30 h (ARTE) for the first major TV event of 2015.

Most everyone still remembers the basic facts from 7th grade History class. In 1811, Napoleon dominates Europe from the Mediterranean Sea to the Niemen River. Based on preceding treaties, Russia is an ally but Tsar Alexander balks at Napoleon’s expansionist politics and allows English ships into his country’s trade ports. Napoleon interprets this as a show of hostility toward France and after assembling the greatest European army ever, sets out to discipline the wayward Russians. A fateful mistake involving 20 nations across the continent …. a march toward disaster and into the legendary freezing winter of 1812 that would cost the lives of over 500,000 soldiers and civilians, and change history forever. 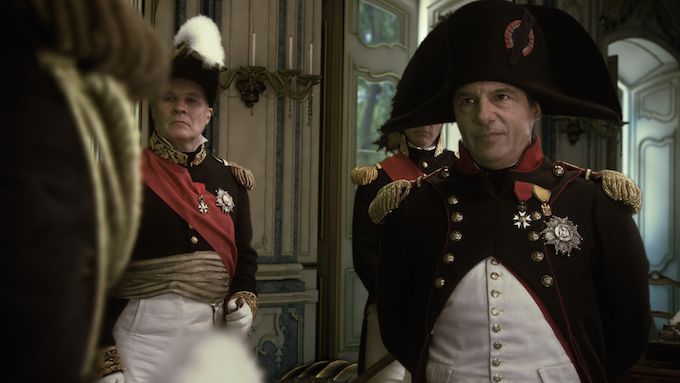 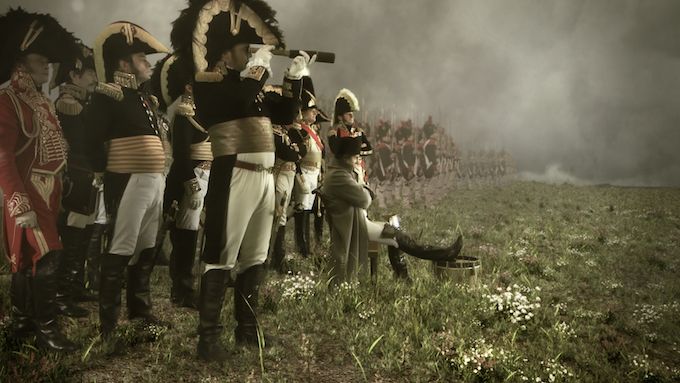 2015 marks the bicentennial of the end of the Napoleonic Empire – for history buff Fabrice Hourlier a great opportunity to recount the course of Napoleon’s war preparations, strategy, attack, and failure. And the Parisian documentary filmmaker does so in his trademark style of marrying historically accurate facts, embedded in a fictionalized story, with spectacular computer-generated and animated film imagery, synthesizing real and virtual stages.

In this co-production with Docside, Fabrice has also lined up a cast that in itself makes this production one of the surefire TV highlights of the year: In the role of Napoleon, none other than one of France’s leading, internationally acclaimed actors, Marc Duret, opposite of his formidable colleagues representing the other decisive figures in the history book – Pawel Delag (Tsar Alexander I), Jean-Pierre Michaël (diplomat and Bonaparte’s aide Armand de Caulaincourt), Alix Benezech (Catherine Pavlovna of Russia) and Constantin Balsan (Sergent Bourgogne).

Throughout the two back-to-back episodes of this docufiction, renowned author and history advisor Marie-Pierre Rey (Université Panthéon-Sorbonne), the Director of the National History Museum of Moscow, Victor Bezotosny, and other international experts provide commentary and an analysis of the events at Moscow and Berezina that ultimately led to the demise of La Grande Armée, ringing in Napoleon’s downfall. 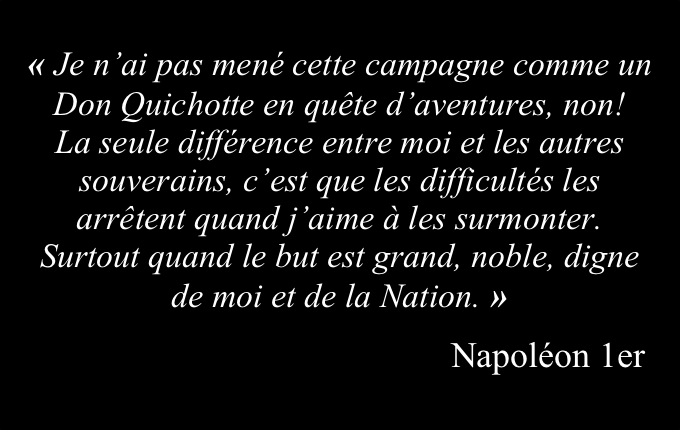 Isn’t such a production, depicting legions of soldiers and hundreds of horses engaged in massive battle scenes across sweeping landscapes, as well as the expensive historic décor, extremely complicated and costly? — “Quite the opposite actually. We have very tight budgets for our productions. But if you think about it: everything we use has already been shot at some point, in black and white, and we’re just building on that by colorizing and enhancing it with the help of 3D technology, and computer graphics and animation. Whatever else we need, we can simply shoot in the studio against green and then process everything by applying a digitalization technique which combines Stop Motion technology with photogrammetry,” Fabrice explains. What did take a lot of effort was to procure models of the correct authentic costumes – 250 of them, sourced from all over Europe. He also tells us that except for a handful of actors, he worked with only ten extras and one horse. And while meticulous preparations took a year, the actual shot was done in just under two weeks.

Post-production, however, is a different matter – that took Fabrice and his team eight months. Eight months of hard work at the computer to create the realistic special effects and the sound design…. no trivial matter to get everything just right, from battle cries to gun shots and whinnying horses. 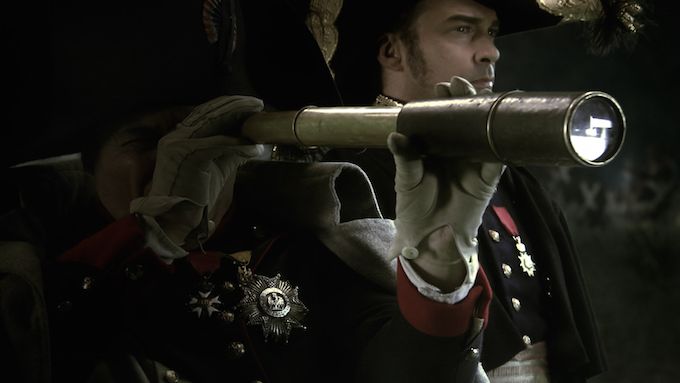 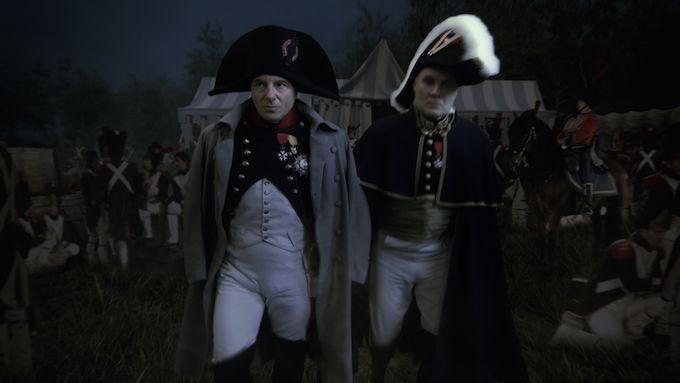 Stunning visuals, an exciting story, and a skillful script (signed Fabrice Hourlier/Marc Eisenchteter) all make for good entertainment, “but the credit really goes to the entire équipe – actors and tech team alike – for putting in tremendous collective effort. Twelve hours of shooting a day in a 600 m2 studio against green demands a lot of skill and concentration from an actor,” says Fabrice.

Primus inter pares among the actor A-team: Marc Duret, who inhabits Napoleon to absolute perfection…. charismatic, authoritative… the gravitas, voice, and body language of a natural-born leader. Every inch an Emperor. And typical for Marc, his flawless precision and timing, the intensity of his look that says so much without words, and the impeccable synchronisation of speech and gestures. We asked the Niçois-Italian-American actor what is was like to slip into the boots of such an awe-inspiring personality – the subject of over one million books and 150 films to date.

“It is certainly not an easy role to play. It seems that there is nothing left to learn about Napoleon but despite all that has been said and written, he was – and still is – a myth. He was such a polarizing figure that it is tempting for directors and actors to misportray and caricaturize him. He was revered and reviled at the same time, often for the same reasons. To shed an objective light on the man and on events that are frequently misinterpreted in the history books, the key is to understand him, his thinking, and his era. Fabrice Hourlier is a master at drilling down to the actual facts, and then repackaging them into engaging cinematic storytelling. Working with him and his team – true pros, all of them – is always a tremendous pleasure.” 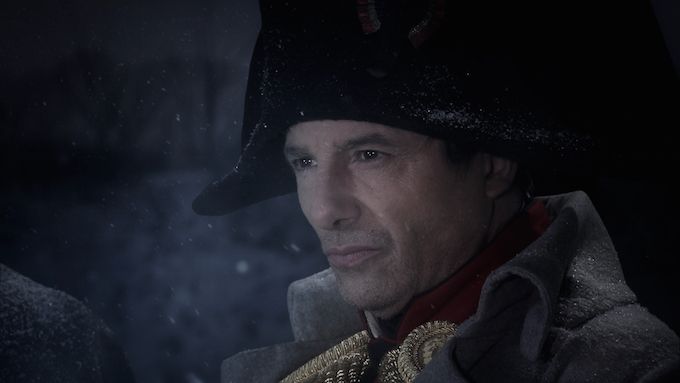 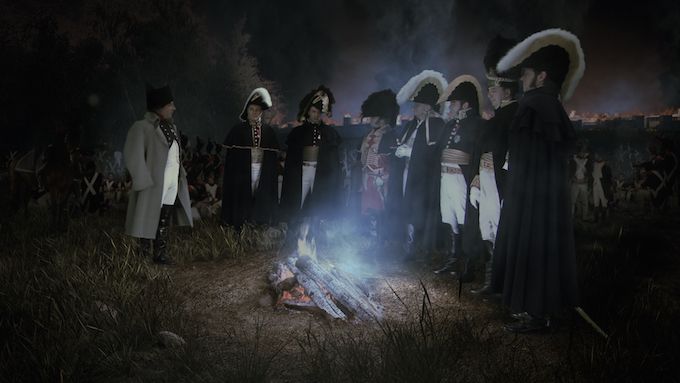 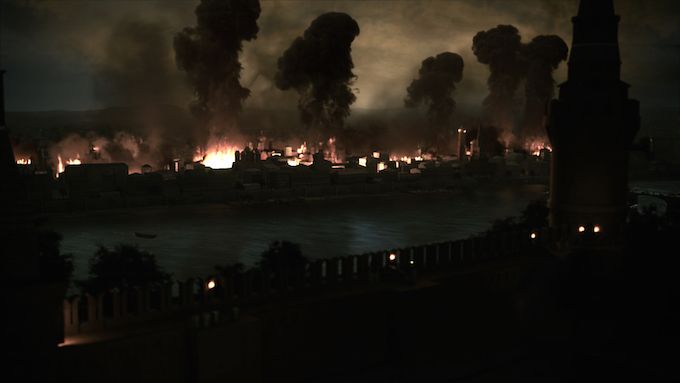 The praise and respect is mutual. Fabrice Hourlier also has nothing but good things to say about his Napoleon. “Marc is superb, a very hard worker. I have known him for many years – since the days he worked with Luc Besson – and he is the ultimate professional. Extremely easy-going, well-prepared, willing to explore and redefine boundaries, forever challenging himself. For Napoleon, he is just the natural choice – physically, but he also has this magnetic aura, he is dynamic and realistic. ARTE found him to be a very credible embodiment of this legendary historic persona.”

This is not the first time Fabrice works with Marc. “In 2012, we did Au Nom d’Athènes, set in 2,500 BCE, the time of the Marathon and Salamine battles. To recreate the contemporaneous ambience, all actors had to speak ancient Greek or Persian. Marc, in the role of Miltiadis the war strategist, actually stepped it up another notch, opting to speak ancient Greek with a Southern accent.”

That is a massive challenge for any actor, even for a language aficionado like Marc Duret who is perfectly fluent in English, French and Italian. It requires expert phonetic transcription of the dialogues, and weeks of listening to taped dialogues to get intonation and inflection right. But for authenticity’s sake, Fabrice insists on using original contemporaneous languages in parallel – Napoleon features French, Russian, and English – and it is well worth the effort: his films are distributed globally, and his buyers from the USA to China actually prefer to subtitle rather than dub the original dialogues… with the notable exception of the BBC who recently purchased Napoleon and insisted on doing a British voiceover.

Fabrice Hourlier has been a staple on French TV for 25 years. His ARTE docufictions count among the most prestigious productions in the cultural-educational space but he also works as a producer for France 2 (Frédéric Taddeï’s D’art d’art) and France 5 (Metronome). After Napoléon, La Campagne de Russie, France 5 will broadcast “Jacky Cochran/Jacqueline Auriol” (Aile Contre Aile) in 2015, a piece on women aviators in the 1950s. And you already know that that will be the next great TV event of the year after this one. 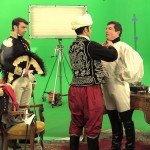 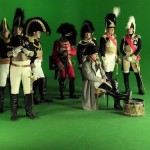 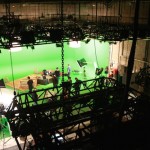 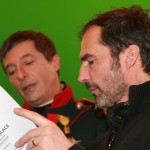 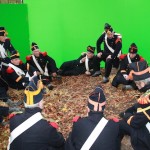 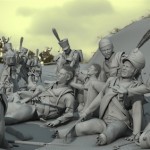 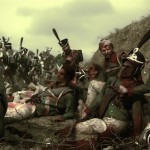 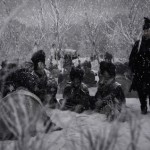