A cappella music has a long and rich tradition in the Maritime Alps. Three young women want to share it with the world

If you have lived in the Maritime Alps for any length of time you have heard – and most likely you appreciate – polyphonic chants, the traditional music of “aquí”. Now this region has another ambassador of its popular music… or rather, three ambassadresses: the new formation called Meïdulla A Cappella is currently preparing its inaugural concert.

The Italian-French Riviera is a melting pot of cultures far beyond its geographical boundaries. Here, East and West, North and South have met for millennia, leaving their traces on the land between the sea and the mountains, and fertilizing them with a blend of styles, rhythms, and traditions from faraway lands. The one constant in this unrestful region: the women who are both stewards and integrators of customs and folklore. This archetypical Mediterranean woman is who the three singers of Meïdulla A Cappella identify with, and it shines through in their voices and their repertoire.

Coming from northern Italy and the Maritime Alps, Claudia Musso (mezzo soprano), Eleonora Amerio (mezzo-soprano) and Marie Foessel (soprano) are three highly trained and accomplished singers/musicians whose paths crossed at the Mediterranean Sea. They all share the same passion for singing A Cappella and for preserving cultural gems handed down by the ancients. Their individual vocal registers complement each other perfectly to interpret a repertoire that reveals the multiple facets of women in the South: vitality, tenderness, impertinence, feistiness, fragility, rootedness, desire, excess, commitment…

In English, “meïdulla” means “marrow”. At a time when most vocal groups are competing for effects, Meïdulla’s three virtuoso and energetic singers – each a highly trained and accomplished musician in her own right – draw their musical identity from the very depth of Voice. They perform traditional songs from the countries of the Mediterranean basin, bringing resolutely contemporary musical arrangements to the original. Their musical “accents” move the listener with their harmony and the beauty and authenticity of their timbres. 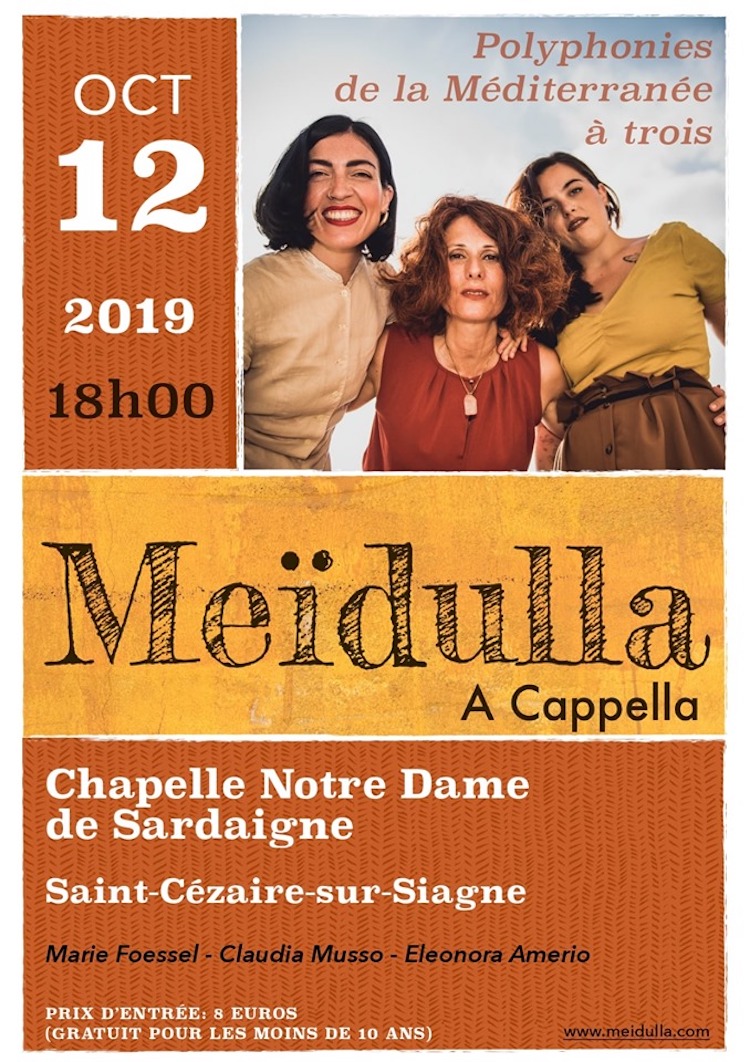 Their repertoire spans the cultural and linguistic gamut from Provençal to Italian, Spanish, Greek, Sardinian, and even French chansons of the George Brassens genre. Many of these songs get a fresh musical makeover by Joris Barcaroli, himself a noted singer and composer with Compagnie Pantaï in Nice.

Meïdulla A Cappella’s inaugural concert takes place on Saturday, October 12 at 6 pm in a spot that could not be more perfectly suited to host this powerful trio of crystalline voices – the late 12th century Romanesque chapel Notre-Dame-de-Sardaigne in Saint-Cézaire-sur-Siagne. It is our insider tip for that weekend, and we predict that this concert will be but the kickstart to a big career around the Mediterranean…. and far beyond.

Admission is €8 and free for children under 10. Reservations may be made by emailing meidullaacappella@gmail.com