Éva Rami, the multitalented Niçois comedian, is currently on a major international tour and finally hits the region again

She is hailed by theatre professionals as “the best actress of her generation”, and few who have seen her on stage would dispute such a bold claim: Éva Rami, who two years ago set the world of theatre ablaze with Vole, is currently touring with her second solo, T’Es Toi, reaping standing ovations and accolades wherever she goes. On May 16 and 17 this young Niçoise with Argentinian roots makes a rare stop on her home turf, performing at Théâtre anthéa.

T’Es Toi (a French word play on “tais-toi”, “shut up!”) is the sequel to Vole, both written and performed by Éva herself and loosely based on her own parcours in life. If in Vole she retraces the hard transition from adolescence to adulthood, we now find the protagonist “Elsa” exposed to the critical eyes of her family and her professional peers. The mother (still a chronic smoker), the father (the central figure in this second part), the maternal grandmother (as eccentric as ever), the paternal grandmother (with a pronounced Nice accent), as well as several new characters (teachers, directors, directors…), accompany Elsa in her development as a young woman, for better or for worse. 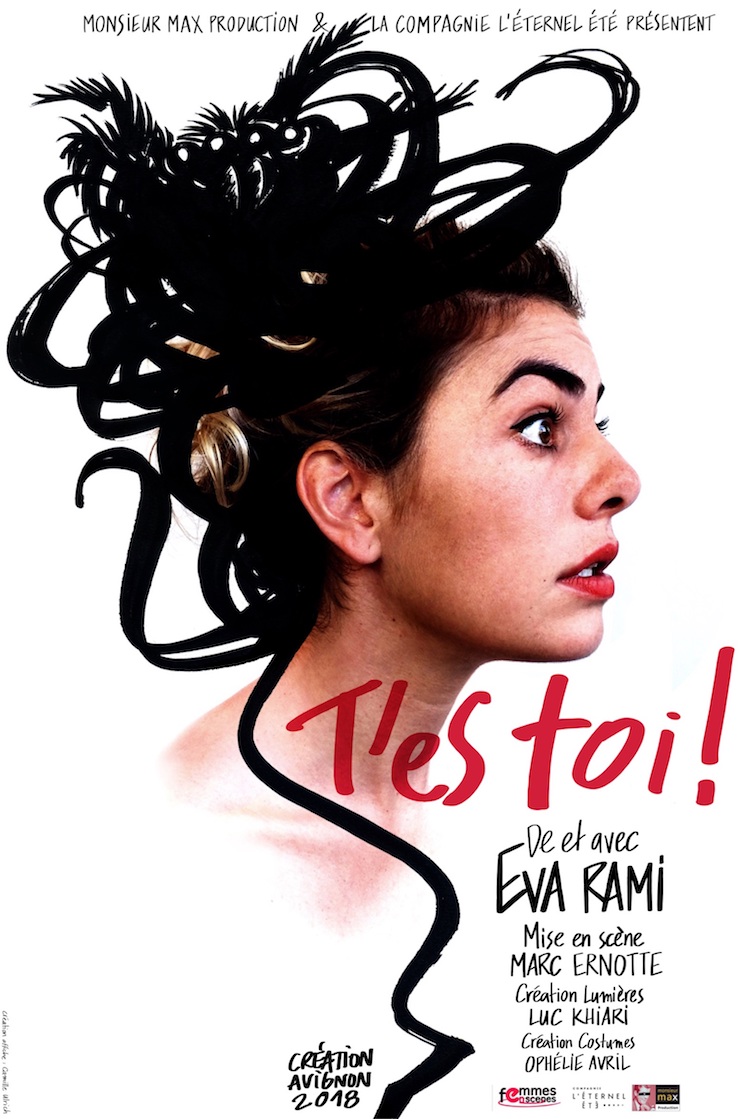 Elsa shares with us her difficulties to find her place, to impose herself and to make life choices. Far from reducing her subject to the world of theatre, she takes us into a world that is familiar to us and with which each of us can identify.

Éva slips in the role of multiple characters, ranging from the whimsical, megalomaniacal, and wicked one to the nag you cannot live with but cannot live without either. The precision of her play is extraordinary, and the speed with which she transforms her persona is breathtaking. Halfway between standup-comedy and tragedy, we experience a rollercoaster of emotions as we rejoice and suffer with Elsa. Above all, we all find ourselves in her skin, confronted with the same familiar characters that populate her and our lives.

“Learning to ‘be’ is a perpetual quest that I am obsessed with. As Elsa’s mother says in ‘Vole’, it is a lifetime’s work”, Éva explains her motivation. In “T’es Toi”, the common thread is the theatre: this artistic discipline, foreign to Elsa’s family, becomes part of her life, wreaks havoc both in the family and Elsa’s psyche, and leads to unexpected encounters until it finally becomes her profession. “In the first part, I created a female-centric environment, this time it is the character of the father who is front and center. He takes up a lot of space.”

The impetus for Éva’s second creation comes from Françoise Nahon, founder of the annual Festival Femmes en Scènes who like many others were struck by Éva’s raw talent and encouraged her to continue the first immensely successful solo.

A rare occasion to see this amazingly talented young woman perform – make sure you catch her before she sets off again on her international tour.

T’es Toi plays at Théâtre anthéa in Antibes, Pierre Vaneck hall, on May 16 and 17. Some tickets still available.

For those who cannot make to it to anthéa (or cannot get tickets anymore), Eva Rami will also be performing in Toulon (Théâtre Colbert) on June 14 and in Nice (Entrepont 109) on June 16.