Michel Eisenlohr’s photo exhibit at Galerie Lympia in Nice pays tribute to the beauty of Syria and those who built, loved, and protected it over the centuries

Syria has been in the news for tragic reasons over these past years, and there is always a tinge of deep regret that along with so many lives, countless ancient heritage sites and cultural marvels have been destroyed. French photographer Michel Eisenlohr‘s current expo “Palmyre, Apamée, Alep – Terres d’Héritage” at Espace Lympia in Nice brings back memories of those priceless architectural jewels not just of Syria but of Humanity itself.

It was in 2002 when the artist discovered Syria and fell in love with it – gorgeous, generous, flooded with light, and sometimes elusive. A land of heritage but firmly living in the present. At the crossroads of civilizations for 11,000 years, it has experienced painful and horrific events over its history. The ruins of Palmyra – witness of our shared past between East and West – are their martyred symbol. Eisenlohr’s photographic essay, presented today in the light of current events, is above all a tribute to the beauty of this country and to the men who have built, loved and protected it over the centuries. 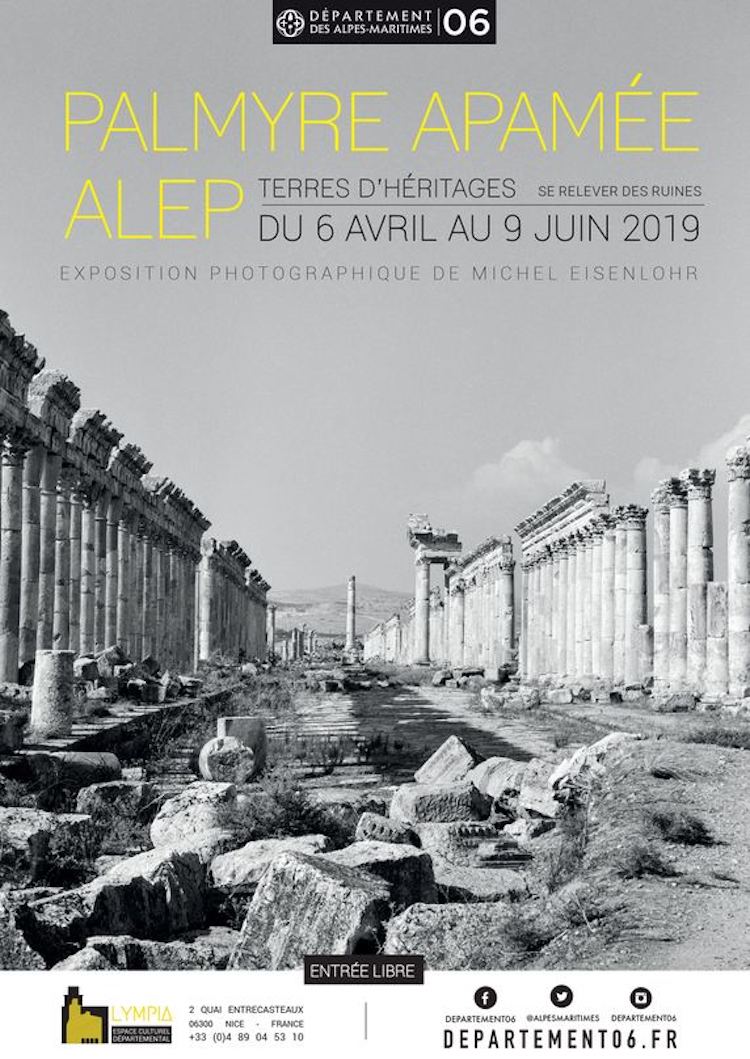 His photos take the visitor on a discovery: Aleppo, one of the oldest cities in the world, crossroads between the Mediterranean and Mesopotamia, captures the sweetness of living life in relative freedom. Palmyra is filled with the splendor and poetry of its ruins. And finally Damascus, overflowing with an abundance of colors and smells of spices.

First stop: Aleppo. One of the oldest cities in the world, the crossroads between the Mediterranean and Mesopotamia. It reflects the sweetness of life. A certain freedom emerges from the city, letting the camera accompany locals and their daily lives without any constraints.

The ancient villages of northern Syria are the second destination – the famous “dead cities” like Serjilla, which bear witness to the union of the Roman Empire’s pagan world and Byzantine Christianity. Here time has stood still. All that remains as a final tribute to lost civilization are sumptuous architectural vestiges engraved with mysterious symbols. Further south, Hamah and its impressive norias, an ingenious water wheel system that dates back to the dawn of time, comes into view.

Another rare moment, and a treat for those interested in Crusader history and literature: the Krak des Chevaliers. Its sheer might, and the contrasts of light, have left a lasting memory on the artist. 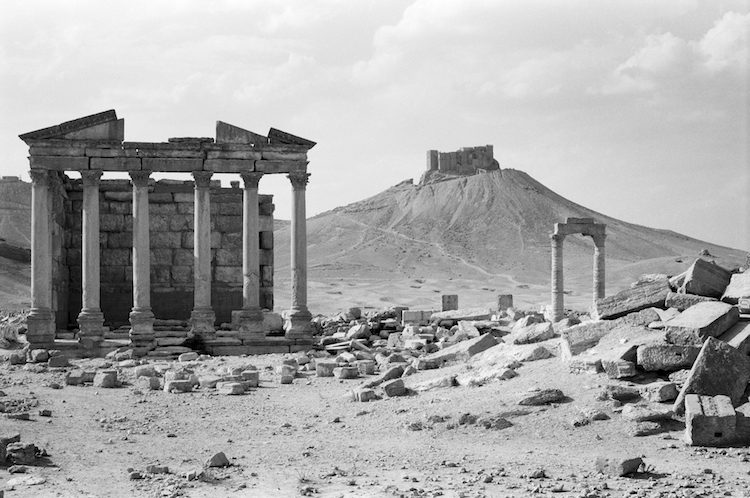 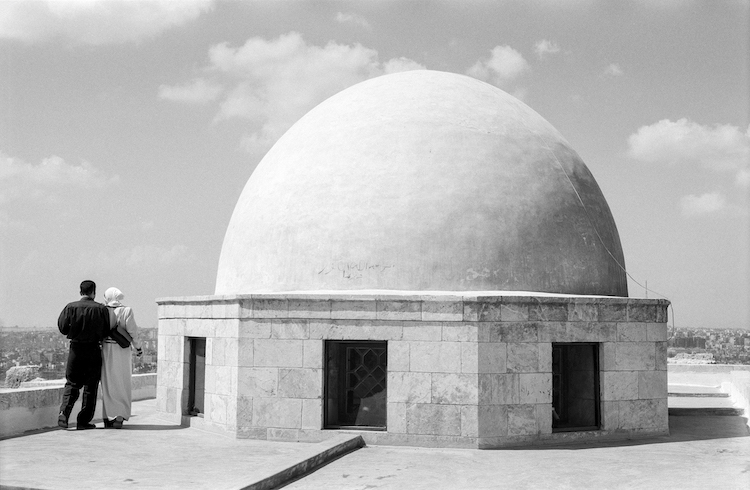 Onward along the trail: in the middle of the desert, the mythical Palmyra appears. “There are places in a journey that you simply cannot miss because they carry within them all the essence of a country. Palmyra was the raison d’être of this journey, a kind of point that was both fixed and imaginary,” Eisenlohr says.

You feel dwarfed by the splendor and poetry of the ruins of Palmyra. The light imprints its mark on it, carving the volume of the columns, cutting out the relief of the sculpted friezes, marking the ground with rhythmic shadows. The temple of Bel thrones on its podium in the center of majestic colonnades. The solitary mausoleums of necropolises resist the blazing sun. In the distance, the silhouette of the citadel watches over the thousand-year-old plain. We believe the city abandoned to eternity but it reveals itself buzzing with children who make of it an immense playground. Passing drivers of trucks, tractors, and military tanks greet the triumphal arch of the former Roman colony with a respectful gesture.

And finally Damascus. The silence of the ruins gives way to the abundance of colours and the smell of spices. The gaze wanders over the buzzing kaleidoscope of shops, fabrics floating in the wind, the maze of dark alleys…. by this way of life that brings together different communities in sharing and respect. The columns of the Roman ruins are joined by the arcades of the majestic Umayyad Mosque with its ancient interlacing geometric motifs of Islamic art. The welcome of the Syrians, including in these places of prayer, is warm and serene. The scent of spices and jasmine pervades all and everything.

“Become passers-by”, says the Gospel of Thomas. This is what every traveler does on his journey, he leaves the shadow of his steps in the dust of the roads of the countries he crosses. — Michel Eisenlohr

His steps have led him to discover spaces that are inhabited, in transformation or abandoned altogether. They illustrate the diversity of lifestyles, beliefs, and customs, as well as the intimate relationship that man has with his territory. This approach certainly begins with a love of travel literature, the adventures of Jules Verne or the expeditions of Marcel Griaule and Théodore Monod. The one that allows you to imagine, to escape by proxy in two complementary dimensions: time and space.

But there is no point in reading books if you don’t let the real world and its experiences rub off on you, Eisenlohr says. “We have to get up and leave. Discover others, their rituals, their environment. The travels have made me realize how much these places are also what remains of man, or of the community, when he is no longer there.”

His first encounter with the Middle East in 2002 was one of love at first sight for the young photographer. “This fantasy of the Orient has accompanied me since my childhood through the books of poets and the epics of conquerors. My vision is therefore that of a poetic, humble, and discreet narrative – I hope – when coming face to face with the memory of places and the intimacy of beings.” In Syria, this country of constant movement, where men flee, resist, hide, wander, settle down, make errors, uproot again and start over, he seeks to transmit the unfathomable, a silent emotion that goes beyond the simple fact of capturing reality. He seeks to fade into the background and try, in his own way, transcending reality to bring out the sublime.

Subtitled “se relever des ruines” (resurrecting from ruins), Eisenlohr’s sensitive black-and-white photography truly does justice to the theme, capturing Syria’s undying spirit of beauty, poetry and hope inmidst of destruction and bringing it back to life. 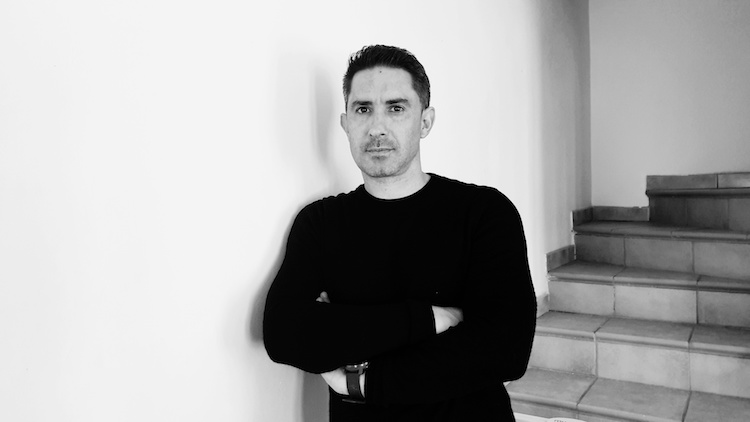 Born in the Mediterranean coastal town of La Ciotat in 1974, Michel Eisenlohr has been a photographer and author for 20 years. Lured by travel literature, he takes his first images in Dogon Country (Mali). After studying literature, he continues his photographic storytelling tales in France and abroad, in West Africa, the Middle East, India, Iceland, and Hong Kong. Rather than subscribing to a particular artistic style, he meanders between techniques and topics. The red thread throughout his work is his quest to capture the spirit of cities, the memory of places, and the relationship between men, territory and beliefs. His work is regularly presented in France and abroad, and has been the subject of several publications.

Open Wednesday through Sunday from 2 pm to 7 pm, closed on Monday and Tuesday. Free admission