To prepare for the first time the world’s premier golf tournament is hosted in France, over 350 clubs all over the Hexagon offer novices the chance to explore the sport for free this September

While in Anglo-Saxon countries golf is wildly popular across all age groups and economic brackets, it has not yet found mass appeal in France. As the host of the next Ryder Cup from 25 – 30 September 2018, the French Golf Federation (ffgolf) therefore seeks to make the sport more accessible to a broader public. Under the motto One Year To Golf, 350 golf courses all across the country participate in a month-long Open Door event this September, luring newcomers onto their precious greens to find out for themselves that golf is by far not a low-key, elitist, solitary activity for the elderly, but a physically and mentally quite demanding strategic team sport.

The Ryder Cup is the third biggest global sports event after the football (soccer) World Cup and the Olympic Games. But for all the prestige the sport carries internationally, French pro golfers have never quite made it to cult status like their Anglo-Saxon counterparts… and while everyone here has heard of Jack Nicklaus or Tiger Woods, few can name the French all-time number one and two players, Jean Van de Velde and Jean Garaïalde. But “Froggies Love Golf, Too!” is ffgolf’s message to the world. If said Froggies still need a bit of persuasion to jump on the bandwagon, an interactive map helps them find a nearby participating golf course that initiates them to the green sport. All they need to do is show up, the rest is taken care of. 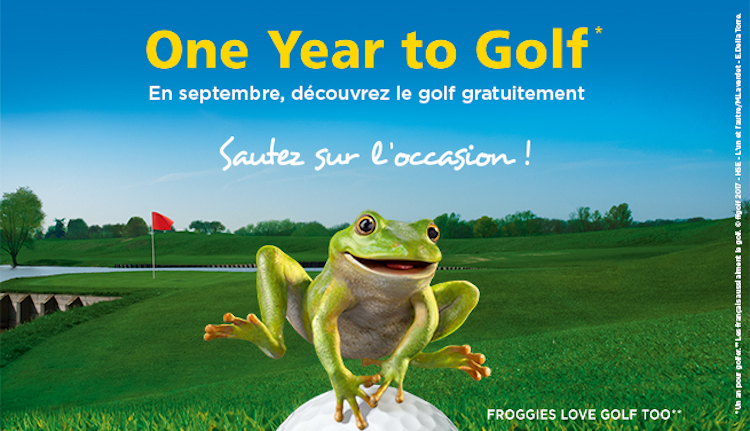 Speaking of green: golf has somewhat of a bad rep when it comes to the environment because it consumes immense amount of water and prevents biodiversity. ffgolf is therefore committed to putting that aspect front and centre and has signed a joint charter with with the French Ministry of Sports and WWF to put ecologically sustainable measures in place for the 2018 tournament.

Created in 1927, the Ryder Cup tournament takes place every two years, alternating between Europe and the United States. A team of the twelve best European players faces off with that of the twelve best Americans to win the coveted trophy. Players don’t get any prize money from the Ryder Cup but the highly commercialized event yields high advertising revenues that are shared with the associations. Of those, the Professional Golfers Association (PGA) of America donates $200,000 per American player to charities (50% going to players’ nominated charities and the other 50% goes to educational causes in the players’ name).

You may not be quite ready for the Green Jacket by the French Ryder Cup kickoff on September 25, 2018, but that’s par for the course. Just take your daily dose of iron anyway, it’s good for you. See you at the 19th!