Nice just got richer by one furry big attraction: its first cat café. Enjoy your lunch with a side of sweet purrs – calorie-free and good for you.

Is there anything better than relaxing at a café after work or shopping, lounging out over a good cup of organic tea and some delicious patisserie? Well yes, there is: adding a few cats to the mix. Nice Cat’s Café offers the best of both worlds, giving the term “picker-upper” a whole new meaning.

Cat cafés are not a novelty per se – the first one opened in Taiwan in 1998, and the concept has since slowly spread across the globe. When Ann Monnier (pictured below) heard about it last year, it was immediately clear to her that Nice needed one. And Ann, a self-avowed world citizen originally from Lyon, is a woman of deeds, not words. Her professional parcours has been an unconventional one, ranging from horseriding competitions to studies of chemistry, and in 2008 she was the first person in Nice to start a home-based petsitting business. At that time she also began taking some of her furry protégés on visits to retirement homes, knowing how therapeutic the bond between man and animal can be. It was therefore a no-brainer for her to pursue a project of opening a cat café. No sooner said than done, she started looking for suitable premises in a central location of Nice and for investors which she hoped to find on a crowdfunding platform. 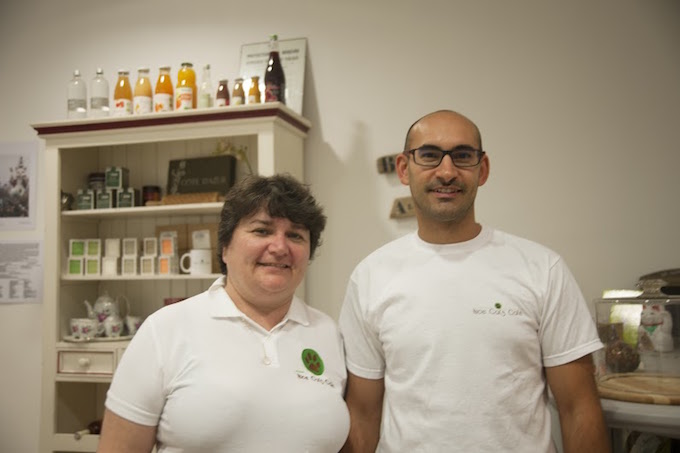 The premises were soon found at 1 bis, rue Vernier, right next to the Marché de la Libération. Financing fell into place as well even though the funds eventually came from a private and anonymous lender. But convincing the almighty, innovation-averse French bureaucracy of this novel idea was quite another battle that Ann faced…. and eventually won. And thus the Nice Cat’s Café opened its doors on 5th November, with Ann and eight felines on standby to welcome visitors.

The menu features reasonably-priced, locally sourced organic light fare, including two daily lunch suggestions, and some sweet treats, all lovingly prepared by Sébastien Nivot, a young and talented “patissier by trade and by passion”. But the main attraction are of course the four-legged team members: Bengale, Aldo, Gribouille, and Blanco – all 6-month-old kittens coming from a private household – are permanent residents whereas Whiskey, Anita, Elsa and Ginger are adoptable, and once they leave, they will be replaced by other kittens in need of a new furrever home. This arrangement is the result of Ann’s partnership with the Société de Défense des Animaux Nice (SDA) where all of the temporary residents come from. 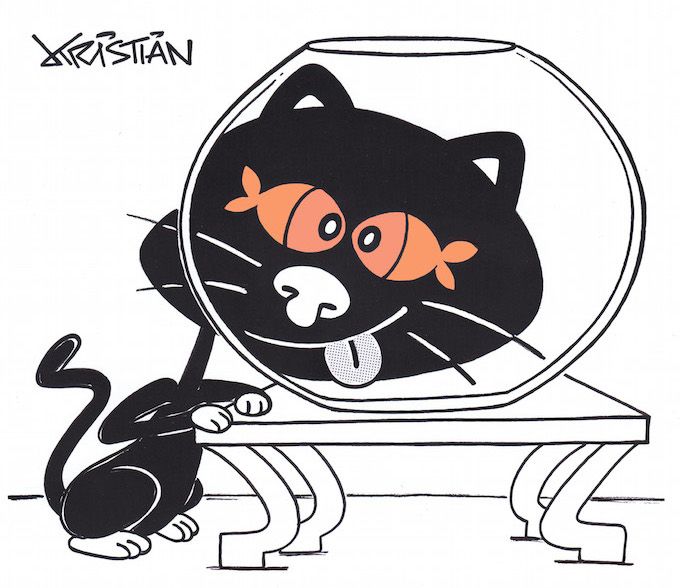 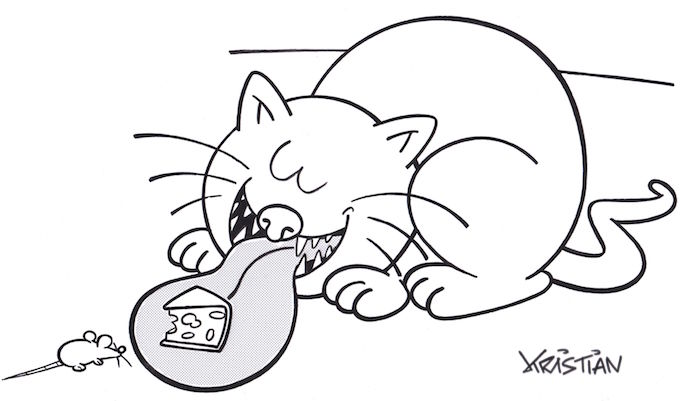 In everyone’s and everycat’s best interest, there are rules to play by both for guests and residents. While playing with the fluffballs is welcome and encouraged, their rest and privacy has to be respected whenever they wish to retire. And as for them, the kitchen and any tables are strictly off-limit.

Don’t expect the premises to be over-decorated… in the interest of hygiene, surfaces have to be sturdy and easy to clean, so the style is functional rather than ultra-plush. And yet, the café has charm – contemporary, comfortable, light and airy, with some of the furniture and accessories crafted of driftwood by a local artisan woodcarver. The artistic touch comes from Kristian, a French-born internationally known cartoonist whose trademark is the distinct sense of humour reflected in his works. A friend of Ann’s, he contributed a series of cat drawings that now adorn the walls of the café.

Do come by and unwind, enjoy some exotic tea or a healthy smoothie, and sneak a cuddle and a purr. A word of warning though: arm yourself with plenty of willpower – both the patisserie and the kitties are hard to resist.