A Frenchman living in the U.S. tells of his encounters with young American environmental activists through his own daughter’s participation in school strikes for climate

I met Kristin Hogue during a climate walk last winter in New York City. I had come with Hermeline, my 13-year-old daughter, who had insisted on participating in the strike that Greta Thunberg had kicked off back in Europe months before. My daughter’s determination had surprised me. Wasn’t she too young? My wife and I were not comfortable with the idea of her skipping school on Fridays but she had insisted and voiced her determination. We gave in. This movement intrigued me, and I wanted to understand how other parents felt about their children’s involvement. We crossed the Brooklyn Bridge with more than 300 young students under a low grey sky. The rain started falling.

Kristin kept behind; she was writing a tweet. “My daughter allows me to tweet on her behalf during demonstrations. The day before the march, she tells me what messages she wants to convey. During the walks, when she is busy, I am in charge of her account”.

Kristin is the mother of Alexandria Villaseñor, the young climate activist leading the U.S. High School movement. Alexandria has been demonstrating in front of the United Nations in New York every Friday since December 14, 2018 to raise public awareness of the climate crisis. She is also the founder of the climate change education group Earth Uprising. 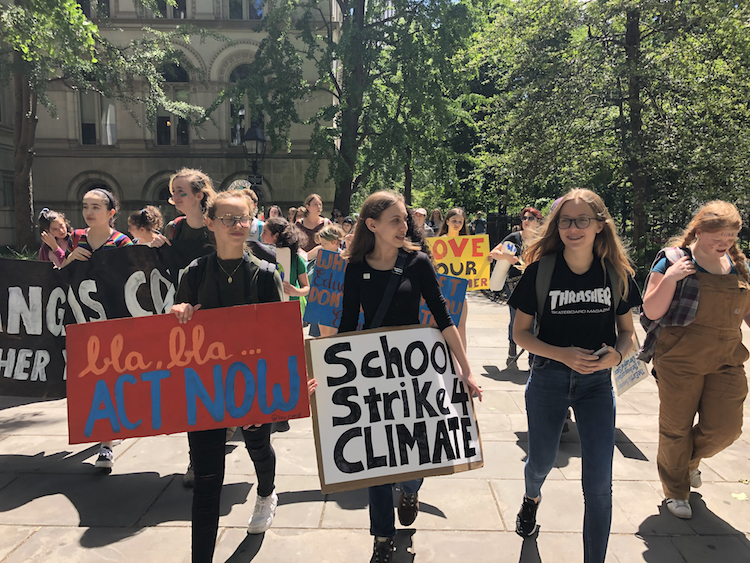 Alexandria’s mother recalls, “The first time my daughter told me she wanted to miss school to strike, we laughed. I thought it was a one-day thing that she would go and march; she would write an essay for her science class and that would be it.”

But she was not counting on her daughter’s determination. Seven months later, Alexandria can’t keep track of the interviews and speeches she has given. From the Washington Post to the New York Times, from the Guardian in Great Britain to the newspaper Le Monde in France, from CNN to France 24. Like Greta Thunberg in Sweden, 14 year old Alexandria has become her generation’s spokesperson in the U.S.

Amplified by social media, Alexandria’s actions propelled her from the benches of her school to television studios in a few weeks. The demands were such that her mother, Kristin, decided to homeschool her. “I go to bed in the evening dizzy with interview requests, invitations to attend conferences and demonstrations,” says Kristin.

The two don’t have much time for themselves and Alexandria often falls asleep on her mother’s shoulder in the NYC metro on their way home after a march. “I dream about it almost every night. In the morning, I wake up to find more requests in my emails. This morning,” she says, “CNN was trying by all means to interview Alexandria.”

Faced with the scale of the school strike movement ‘Friday For Future’, parents gathered in support groups called ‘Parents For Future.’ In the United States, one of the largest groups is in Seattle.

Hélène Costa de Beauregard, one of the Seattle group founders, explains her decision to get involved: “On October 2018, the IPCC report on global warming was a wake-up call for my husband and me. We knew that as citizens, we needed to do more to reduce our carbon footprint and that we needed to be more involved. We have young children (18 months and five years old), our duty as parents is to protect them and their future. P4F was the right solution. So I created a local P4F group with the help of Heather, the mother of young activist Ian, in Seattle. I found an incredible group of people from all continents.”

Accepting that your child goes on strike, even for the climate, is not easy. “At first, I refused. I couldn’t imagine letting my daughter miss school every Friday,” recalls Teresa Tsarouhtsis, mother of Catharine, 16. “But thanks to her example and daily deeds, Catherine convinced me. Now we recycle everything, and we won’t go shopping without taking our bags with us. Today I let her demonstrate.”

Some activists have become very popular and vocal on social media. Alexandria has more than 25,000 followers on Twitter. It is on this platform that Alexandria was harassed by Marc Morano, a former Republican Party assistant, and climate skeptic. “I was afraid for my daughter,” says Kristin. “And when the far-right newspaper Breitbart published an article about Alexandria, she received threats, and I increased my vigilance.”

In the Netherlands, Lilly Platt’s mother explains during a chat on Whatsapp that her job is to monitor hate messages from extreme right-wing groups. At the age of 11, Lilly and her grandfather are fighting against plastic pollution. When Lilly announced that her grandfather Jim Platt, 79, would vote in the European elections for the candidate that she, Lilly, would choose, messages on social media called for killing her grandfather with a massive dose of morphine. 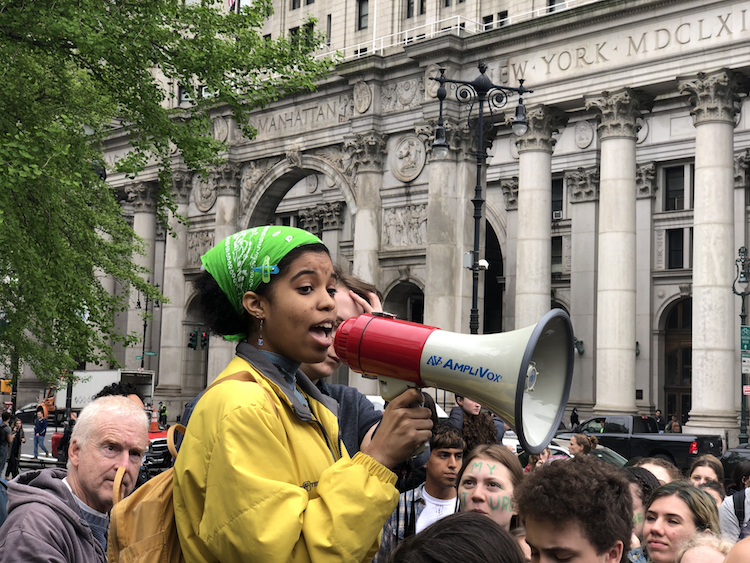 In North America, these school strikes are not unanimously accepted. The American values of work and individualism do not leave much room for activism. Furthermore, according to Pew Research, only “two in ten Republicans (21%) said that climate change should be a top priority.”

Many adults call out to children during their walks. “You’d better go to class,” they are told; “You’re wasting your time, your strikes are useless,” I heard recently in New York.

Rom Lin lives in Toronto, Canada, with his wife and 23-year-old daughter. He is retired. “I am a Christian, a disciple of Jesus,” he says. “I think Al Gore and David Suzuki (both environmental activists) are making money by scaring people about this ‘problem.’ The planet earth is too big & complex. God made it so beautiful & perfect with all that’s needed for human beings to survive,” he says.

The climate “strikes” advocated by the students are mostly the results of peer/teacher’s influence. “The students can start by doing something small themselves and not impose a “solution” by telling the government to do something,” he adds.

Hélène refutes the idea that teenagers can be influenced in this way. “These strikers are teenagers. When you were a teenager, could your parents have convinced you to take such a position in public?” she asks. 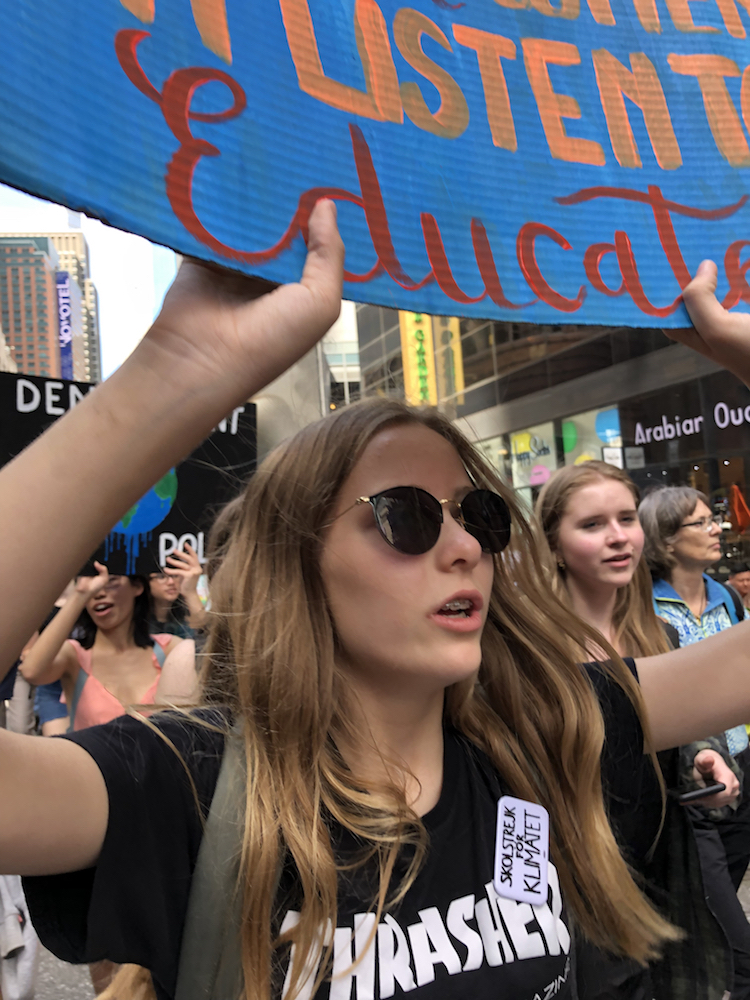 The best time to act might have been 30 years ago, but there is no better time than now to tackle the climate crisis decisively. “That’s what the kids are urging us to do. They are taking a brave stance and shaking up the status quo. And their actions, are not taken on a whim, they have been supported by the scientific community which published letters in support of the Climate strike,” Hélène adds. In her view, when thousands of scientists are ready to put their names on the line in support of such a movement, this should make everyone reflects on the urgency.

Kristin doesn’t care about controversy; she doesn’t have time to stop for critics. She went back to university to work on her Ph.D. at Columbia University in New York to understand the impact of climate change on societies. She knows better than anyone else the urgency of this crisis.

“When I am accused of instrumentalizing Alexandria, I say yes, I do, because education in itself is a form of modeling our children’s minds,” says Kristin. “And yes, it is true that I am correcting her speeches and that we are talking together about future actions. A little like parents are helping their children with their homework.”

She insists that those who think that children are just repeating without understanding what they are being told to say should come and meet these young people. “These kids spend hours on the web learning and reading scientists’ reports. We live in the age of the Internet, and young people know how to find information.” 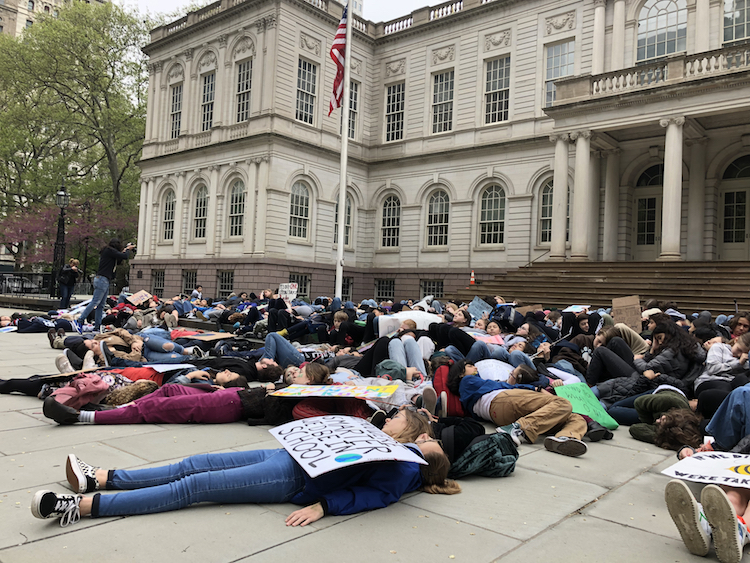 For the past few weeks, Kristin and her daughter Alexandria have been regularly invited together to share their experience as activists. In June, they were at the United Nations participating in the Global Leadership Summit. In August they welcomed Greta Thunberg in New York, and in September they both sat in the 7 hour CNN Climate Town Hall with 10 Democratic candidates. Commentators called this mother-daughter team ‘intergenerational activism.’

The global youth movement is changing the game in a way that most adults would never have expected. Parents who want to get involved are looking for a place in the race next to their kids — supporting without leading, intervening wisely. Be sure that if adults are too present, the kids will let them know because now they show us that they do not need anyone to make their voices heard.

All photos courtesy and © Stanislas Berteloot