There is hardly an era in the course of history that has not left its mark on Nice. Prehistoric humans settled here 400,000 years ago. The Greeks, the Romans, the Ligurians, St. Reparate, tsars, monarchs, and Napoleon, and some of the world’s most renowned artists – they all imprinted their presence on the city in one way or another. To bring their stories to life, and to honour the milestone year of 2016 which marks the 50 year anniversary of the first modern-day archaeological digs in town, the Ville de Nice has developed a series of guided walking tours, allowing visitors an inside peek into the turbulent and colourful past of the City by the Angel Bay.

If there is one man in town who understands the value of these sites better than anyone, it’s Jean-Luc Gagliolo who in his capacity as city councilor in charge of patrimony leads a tireless campaign for the preservation of Niçois heritage, and for making it accessible to the public. “There are so many special sites in town that even I as a local never or only rarely have had access to. It is my goal to have them restored and opened to the public to share our unique history with the Niçois, our visitors, and their children and the following generations,” is his declared mission. And this is done in a high-quality pedagogic way all while keeping it interesting and exciting by also sharing history’s unknown back stories. Find out some of those secrets in this series of five tours, all of which reveal a side of the city that you may never have seen or known of before: 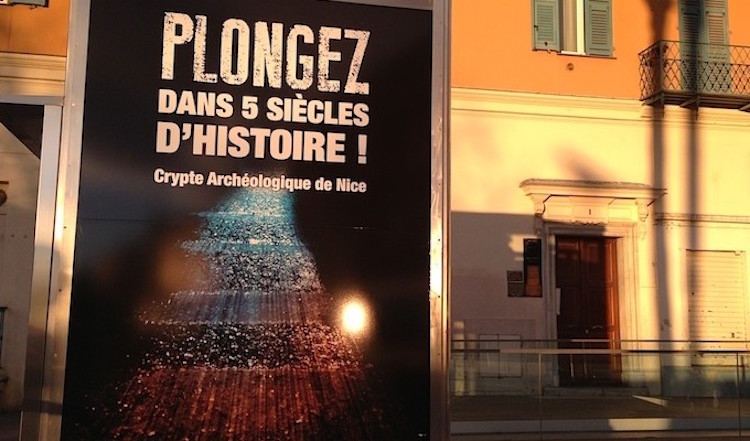 When excavating the area around place Garibaldi to lay tracks for the tramway, workers hit upon what turned out to be the foundations of the Medieval city, dating back to the 14th century. The remnants, it turned out, belonged to the Château de Colline, just a couple of hundred metres further up, and still featured the fortified structures to protect the castle, including turrets, a moat, a drawbridge, exterior walls, an aqueduct and outbuildings. Realizing the treasure it had at hand, the City developed this site into the underground Crypte Archéologique, a 2,000 sq.m. site that has since been rendered open to the public and is second only to the Crypte du Louvre in Paris. The guided 55 minute tour and the illustrations along the way give a stunning overview of Niçois life in the 14th to 17th centuries. Groups are limited to 15, so pre-booking is mandatory.

The crypt below place Garibaldi, which once upon a time marked the entrance to the castle perched high above Nice, is the perfect starting point for the trek up the Colline du Château. And once the imposing hill rising out of the Mediterranean Sea is conquered via meandering, cobble-stoned paths, the one question on every first-time visitor’s lips is, “Oh but where is the castle?” Eh bien… the castle is gone. King Louis XIV’s soldiers dismantled the reputedly impregnable citadel in 1706. 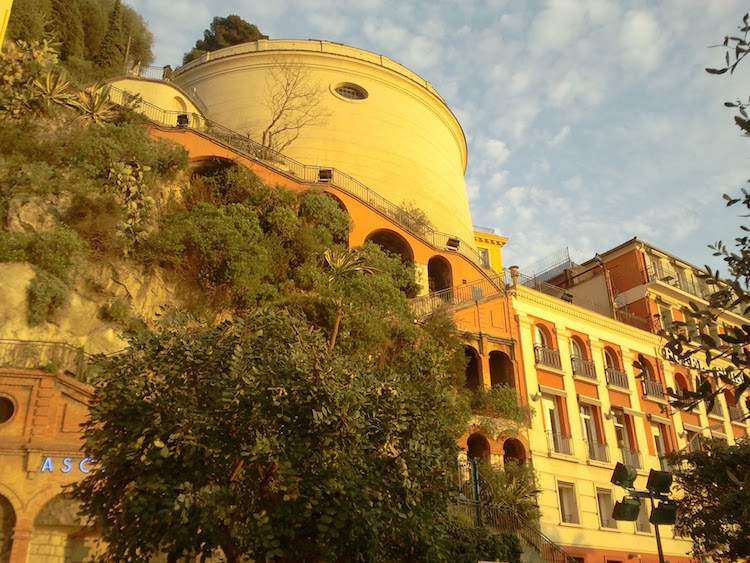 Archaeological work is currently underway to unearth its foundations. But instead you have found a park which is still very much the true centre of town in many ways and a haven of peace at the same time. It offers countless secluded spots from where you can admire the sweeping panorama of the city at your feet and across the Baie des Anges. A waterfall provides a peaceful, tranquil spot for lounging, reading, or daydreaming. Abundant lush greenery invites you to pause and take in the beauty and diversity of nature. Old and well-preserved mosaics on the ground and on the walls along the way recount the city’s history. And one of the most picturesque cemeteries in the world, high above town, is not only a historic burial site for countless famous locals but also a world-renowned open-air museum of sorts for exquisite marble carving.

A guided 90 minute tour will take you to all of these places on Castle Hill, telling you about the fascinating history that happened on these very grounds but also shares more intimate and lesser-known stories linked to these walls.

So now that the Crypt and Castle Hill have delivered their secrets, it’s the turn of Old Town to share its stories. Very much intact and still a hustling, bustling center packed with shops, restaurants, bars, and galleries. Be prepared for a journey back in time. 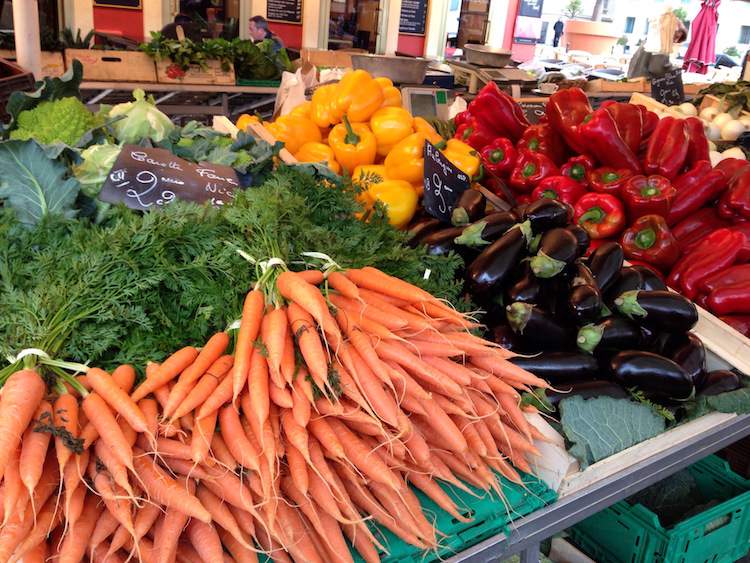 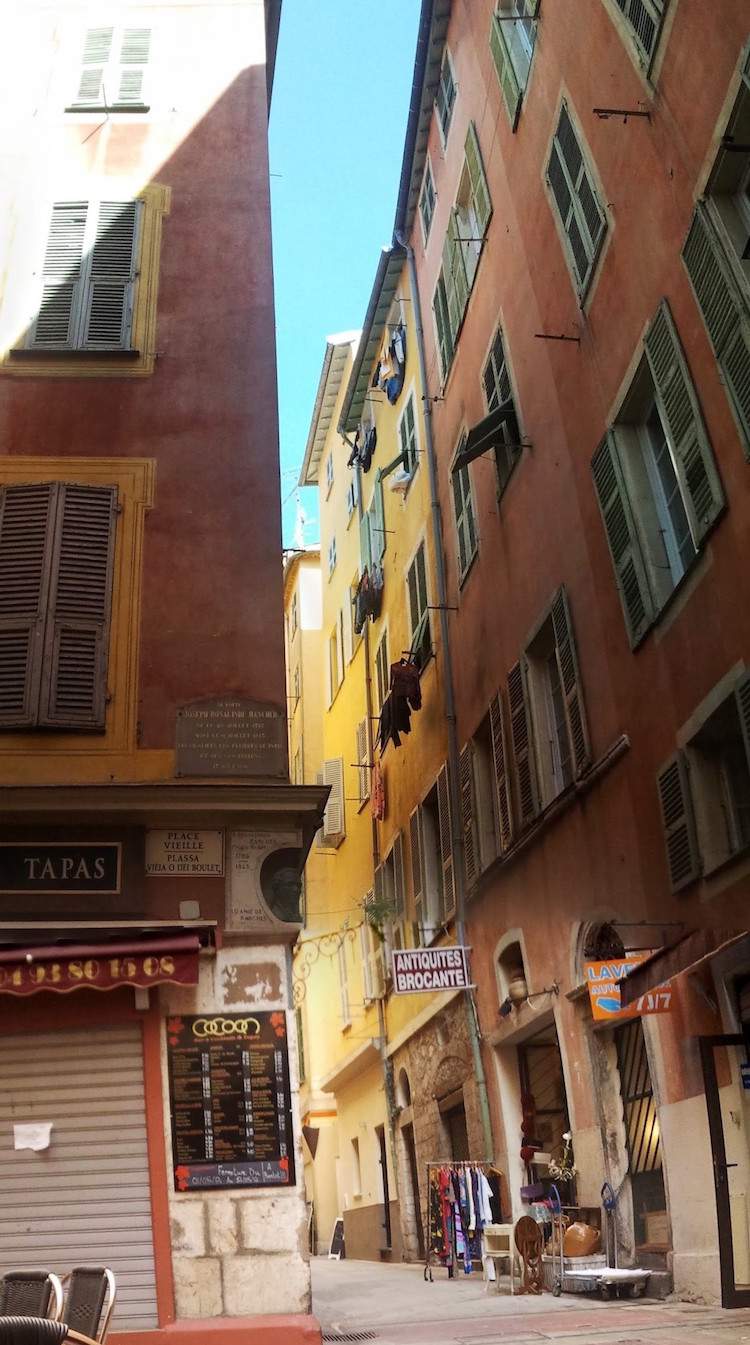 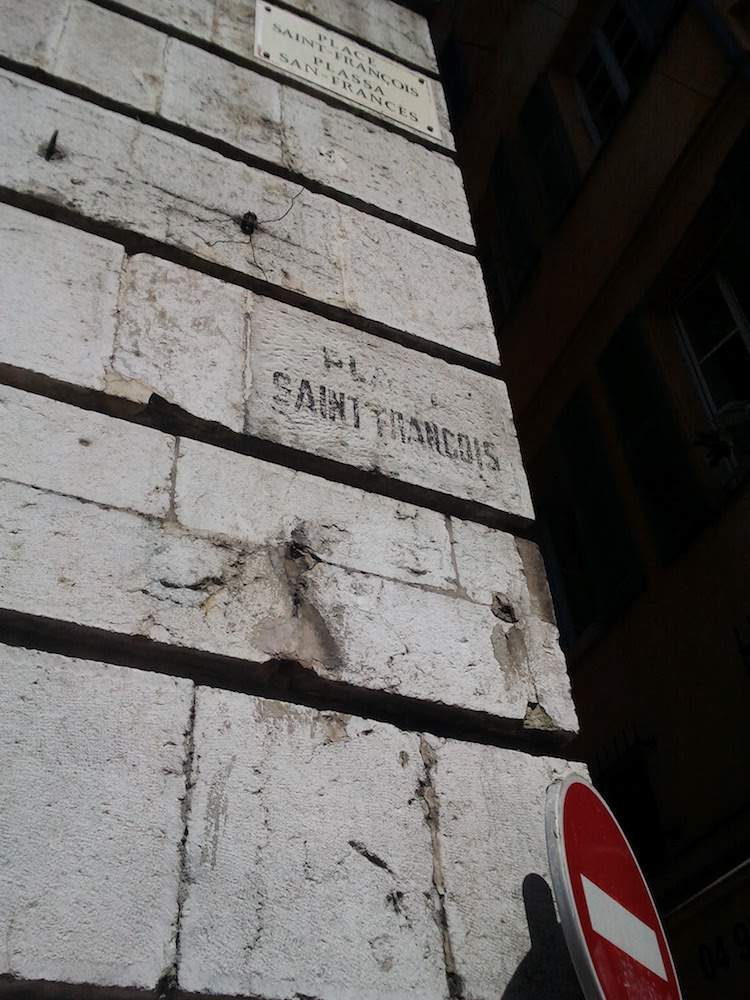 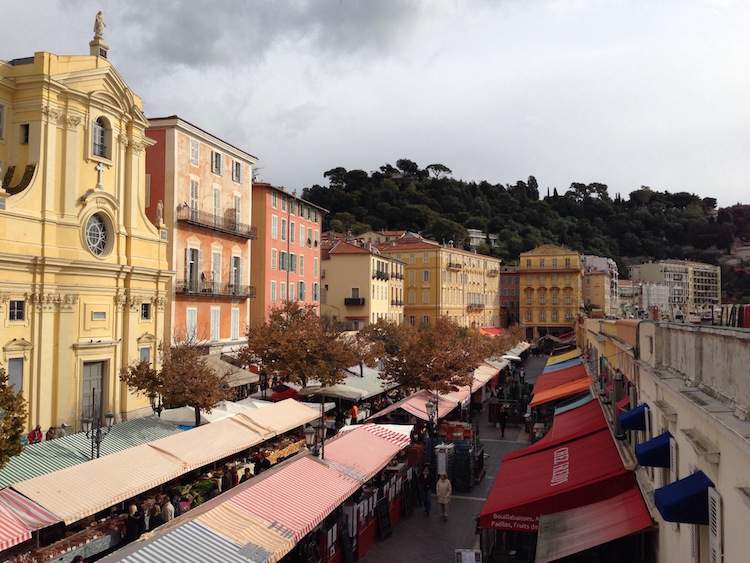 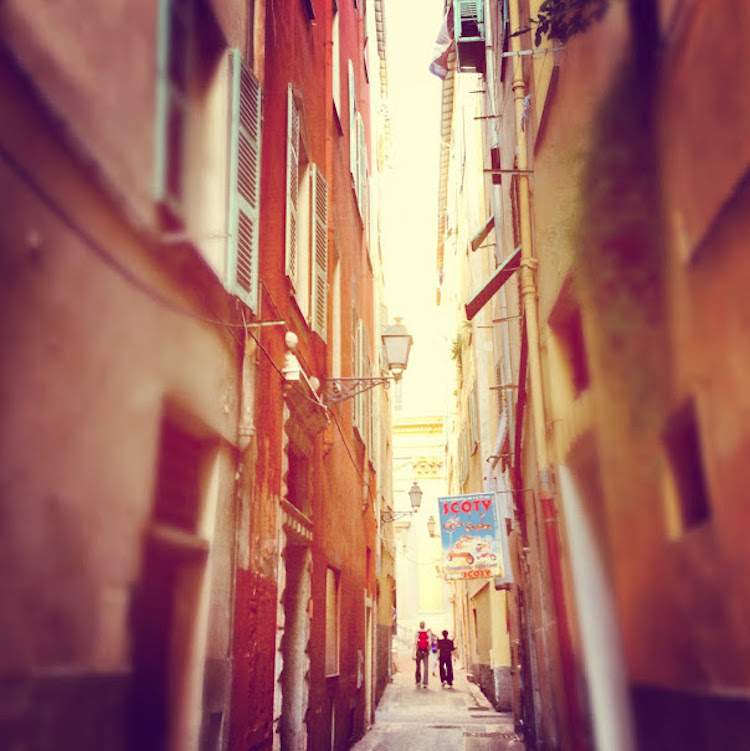 Here, Nizza is still firmly and proudly Italian, as it was pre-1860. Crookedly lining tiny alleys and painted in the vivid colors so typical for Italy, 500 year old houses are still standing and are very much lived in. Freshly laundered clothing, hung out to dry, floats high above your head. The pleasing noise made by resident artisans and craftsmen invites you to explore. Artists, like world-renowned painter and sculptor Michel Anthony, work out of their ateliers and enjoy having you watch them. The tantalizing smells of food and bread produced onsite permeates the air, and Farmers from the hinterland peddle their freshly picked agricultural exploits on Cours Saleya, and the local fishermen offer their catch of the day just a few steps further down, on place St. François. This is where the Niçois provision themselves for the day. But the secret to catch this magic is to arrive when Nice wakes up and before tourists appropriate the area for themselves. A 90 minute walking tour takes early birds on this fascinating travel through time and history, to off-the-beaten-path locations, and to sites that marked the city’s development.

While Nice was growing into a successful, bustling Medieval town, it became also a coveted prey and therefore suffered frequent attacks. In 1543, twenty thousand Franco-Turcs invaded and beleaguered the city and the castle while a flotilla of 120 under the command of Sultan Soliman attacked from the seaside. But although badly damaged, defiant Nice would suffer no such nonsense and in 1560 proceeded to construct a military fortress, strategically located on the top of Mont Alban, a stone’s throw outside town, to protect both its seafront and its inland territory. In the five and a half centuries since its inauguration, this site has accumulated a history worthy of a Hollywood script, changing hands, nationalities and functions numerous times, and going from glory to tragedy and back. 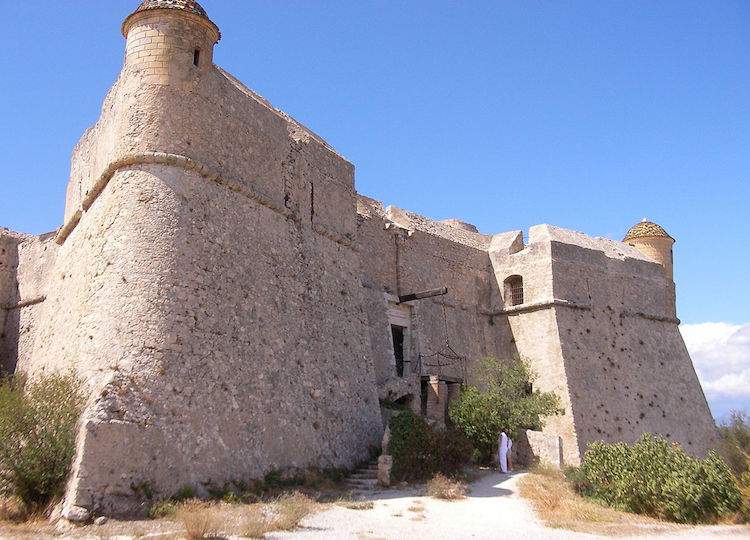 The fort, which offers spectacular panoramic views over the Mediterranean, is open to visitors every summer (although for security reasons no children under the age of 7 are allowed), retelling the military story of the Countea de Nissa and the daily life of its soldiers in an amazing 90 minute tour through the grounds and fortress

In the Tsars’ Footsteps

A more genteel “invasion” arrived in the 19th century, when European royalty discovered the virtues of the beautiful Azurean city, which include not only magical vistas but also benign climate all year round, unparalleled subtropical vegetation, and the locals’ innate joy of life. Soon Nice became a favorite especially for the Russian court, and this led to an association between Russia and the French Riviera that continues to this day. Tsar Alexander II and his entourage were the first but not the last ones to spend significant amounts of time here. The Russian-Orthodox cathedral, consecrated in 1912 memory of Nicholas Alexandrovich, Tsarevich of Russia, who died in Nice, began to serve the large Russian community that had settled in Nice by the end of the 19th century, as well as devout visitors from the Imperial Court, and its construction work was funded by Tsar Nicholas II. A 90 minute guided walking tour through the bourgeois Piol quarter, also known as Little Moscow, lets you sneak a look behind the scenes and shares the inside perspective of the Niçois-Russian history of friendship.

When: Wednesdays
Meeting Point: 2 boulevard Tsarévitch, Nice, in front of the Palladium building

Contact for all events: phone +33 4 92 00 41 90
Ticket: €5, concessions available – check Les Promenade(s) de Nice website for exact schedules and times.
Generally, tours are currently held in French but can be arranged in other languages on demand.