2016 is no ordinary year for local history buffs, with several milestone anniversaries on the calendar.

There are those who think Nice goes as far back as the arrival of the first English tourists at the end of the 18th century. Others claim the city was born when the ancient Greeks stopped over here 2,600 years ago, founding the settlement known as Nikaïa, in honour of Nike, the Goddess of Victory, closely followed by the Romans who enjoyed the breezy heights of Cemenelum, today’s Cimiez, established by the illustrious Augustus in 14BC and with a spectacularly well-preserved site to show for.

But they all are off by a bit… or more precisely, by several hundred millennia. In fact, the first settlers to set foot on the narrow strip of land sandwiched between the sparkling blue Mediterranean Sea and the rugged, snowcapped Alpine mountain range came here about 400,000 years ago. That’s Four Hundred Thousand Years, and we’re talking about the time homo neanderthalensis and homo sapiens overlapped, and their momentous discovery of how to make fire. 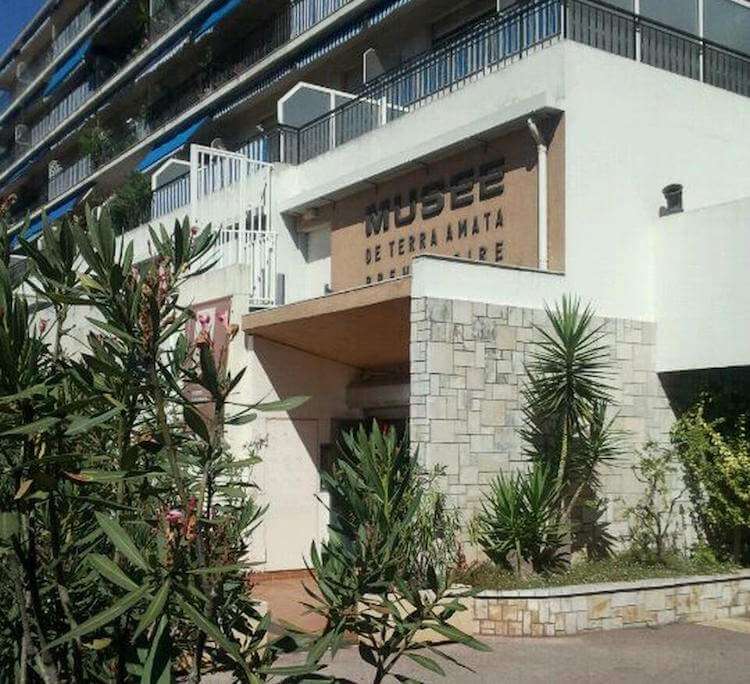 One of those distant forebears left a footprint in the sand all that time ago, which happened to fossilize. And that’s what caught the attention of modern era archaeologists who, in 1966, began drilling down into history, just a stone’s throw from what is today’s Port de Nice.

16th September, 2016 therefore marks the 50 year anniversary of the first dig, and the sensational finds uncovered by archaeologists, historians and scientists over these past decades, are on display at the Musée de Terra Amata, built on the very spot of that prehistoric settlement and dedicated to the painstaking reconstruction of life back then. In fact, you can still see that famous footprint in the sand! And the museum itself is also up for a big 4-0 anniversary, having been inaugurated in 1976, exactly ten years after the first hit of the spade.

The City of Nice is commemorating this dual anniversary – and its own unique place in the history of human settlement – throughout the year through a rich variety of events around town. Among the highlights (with more to be announced throughout the year) are:-

The Théâtre de Verdure features an original artistic creation by Musique et Toile, dedicated to “The Adventure of Fire”. Presented by an actor, a harpist and a dancer, this presentation – as poetic as it is pedagogic – explores the role fire had in our ancestors’ lives and societies.

During the National Archaeology Days, an archaeological village will be erected on place Jacques Toja, next to place Garibaldi and at the entrance to the crypts. Here, you can meet paleontologists and archaeologists and chat with them about their professions and their research. A “Terra Amata” tent especially put up for the occasion will house a presentation of the early historical digs and allow you a peek behind the scenes of the museum and its current renovation. A great opportunity for young and adult visitors alike to learn more about the development of the human skull, the domestication of fire, and the regional evolution, climate and biodiversity.

Make sure to catch these spectacular events…. And mind where you step, your footprint might just about be preserved for all eternity and have its own museum built on top of it 400,000 years from now.