It is said that all truly great French theatre companies are in Paris. The work that Antibes-based Collectif 8 does, proves otherwise.

Theatre today is likely the most complex artistic discipline there is. Gone are the times when actors stepped on stage, said their lines, took a bow, and disappeared in the wings. Modern theatre practitioners face tremendous challenges ranging from fierce competition, severely limited budgets, and the need to reinvent themselves over and over. Broadway, West End, Ku’damm, or closer to home….. big stars, small companies….. national, municipal or private theatres…. They all know the same battle.

This is especially true in France, a country whose extraordinary pride in its cultural heritage obligates professionals of the performing arts to stay faithful to its traditions and literature, while at the same time demanding constant innovation. This has left its traces on the cultural scene. By necessity, theatre directors are increasingly becoming business managers, juggling to satisfy the demands of a sophisticated public. Actors, whose hallmark used to be versatility, are more and more pegged in certain genres or characters to ensure box office success. As if that were not enough, French theatres also face another challenge – to counterbalance the prevailing somber mood that has beset the nation in recent years with uplifting lightheartedness without becoming bawdy or shallow. A feat that few French theatre companies can successfully answer to. Very few. 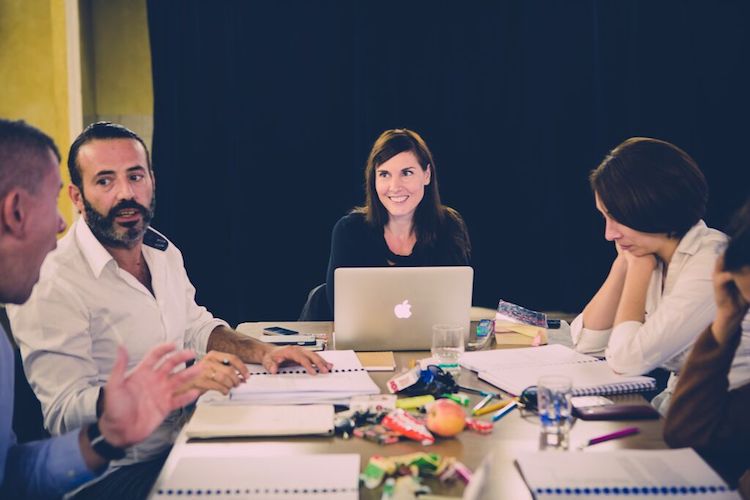 But Collectif 8 can, and does. This company is one of the undisputed pioneers and leaders of French contemporary theatre. It successfully checks all the boxes that make theatre great… originality, outstanding actors and artistic direction, and a superior level of professionalism…. but beyond that the company owns – and that is, completely owns – a niche that has been overlooked all too often, and is yet self-evident: that of merging two distinctly different branches of the performing arts into one. Collectif 8 is where theatre crosses over into cinema….. or is it the other way round? Don’t even try to analyze, take it for what it is, the best of two exciting artistic worlds. Let’s take a peek behind the curtain though. 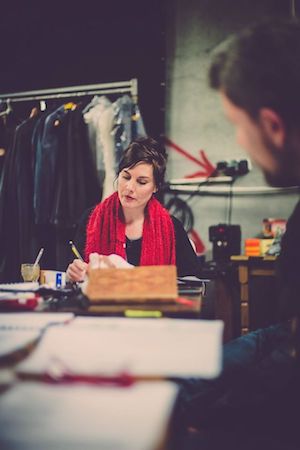 It all started in the 1990s when Gaële Boghossian and Paulo Correia were students at Daniel Benoin’s École de la Comédie de Saint Etienne. Daniel Benoin himself needs no introduction in theatre lovers’ circles; he is one of the ones who have defined French theatre of the 20th and early 21st century. Among his long list of accomplishments, his 12 year tenure at the venerable Théâtre National de Nice (2002-2014), followed by his engagement at the helm of Anthéa, the new and incredibly successful theatre in Antibes, a stone’s throw from Nice.

Graduating from the École de la Comédie stable of talents is a hallmark of quality in itself. But there was something so special about Gaële and Paulo that Daniel Benoin called them to Nice following his 2002 appointment as the TNN’s artistic director. His instinct proved him right. In 2004, Gaële and Paulo’s founded Collectif 8, and the work they have done since has definitively put the company on the map as Nice’s answer to Paris.

Collectif 8’s hybrid of performing arts, theatre, video and music – aptly called cinéâtre – makes them unique, distinguishable from anyone else within split seconds. Their specialty is taking classic authors – from Sophocles to Goethe, Molière, Edgar Allen Poe, Lewis Carroll, Victor Hugo, and Denis Diderot, to name but a few – and revive their works, 21st century style, mixing contemporaneous scenography and contemporary visual techniques as if it were the most natural state of theatre in the world. And it works. It actually works exceptionally well. The visual results are grand, bold, envelope-pushing cinema, except that you are witnessing a live theatrical performance….

C8, that’s also a dream team of multidisciplinary artists and creatives: Gaële Boghossian, doubtlessly one of the greatest contemporary French acting talents, but also a writer, philosopher, humanitarian, and an artist through and through. Paulo, more leaning toward artistic direction, is the forward-looking, technophile creator, driver, and pragmatist, but no less of an artist. And Vanessa Anheim-Cristofari, the soul and spirit… the Mother of the Company in the best Brechtian sense, who creates order from creative chaos. Together they work with a revolving pool of outstanding company actors and musicians – among them Paul Chariéras, Mélissa Prat and Clément Althaus – and the occasional guest, tailored to their creations. 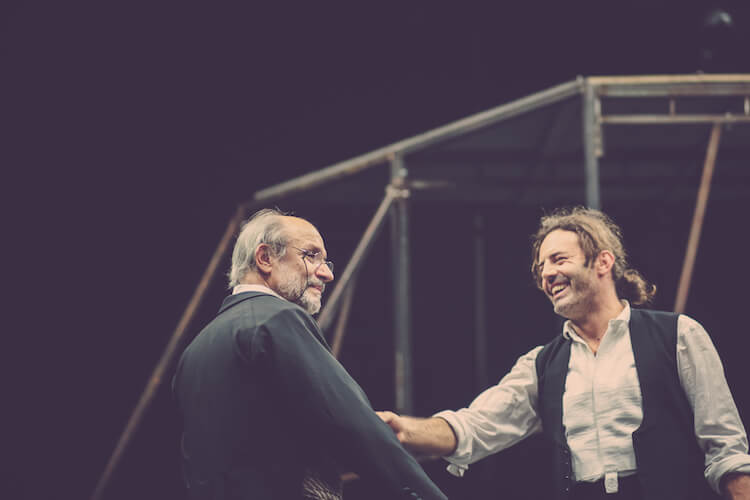 A “Who’s Who in World Literature” Repertoire

The Benoin era at the TNN is synonymous with Collectif 8. The public adored its versatile resident company and its rich diversity of authors and reinterpretations, watching it grow up from a young fledgling to a troupe of national renown.

January 2014 rang in the home stretch of Daniel Benoin’s 12 year tenure, and he was intent on leaving a memorable goodbye note: Collectif 8’s sensational creation of Victor Hugo’s Angelo, Tyran de Padoue, with internationally acclaimed actor Marc Duret triumphing in the title role and a stellar Gaële Boghossian as La Tisbé. The play brought down the Théâtre National de Nice night after night and drove critics to outdo each other in their praise. Benoin left for Antibes at the end of the season to take over the rein of the brand new Anthéa theatre…. and, to the dismay of many a Niçois but loyal to his protégés, he lured Collectif 8 with him. A genius move that was rewarded with more masterful work, which often sends a nod toward English and American literature, a genre favored by Anglophile Gaële. 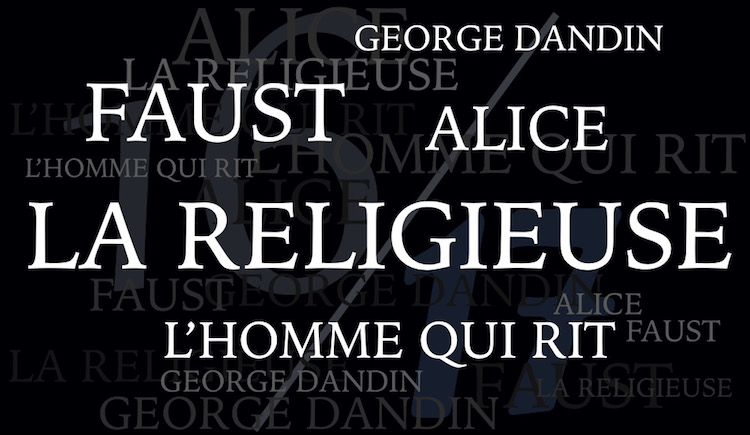 Alice (2014) was one of those unforgettable theatrical jewels. A masterful Paul Chariéras and an energetic Clément Althaus accompanied Gaële on this poetic journey into the realm of Lewis Carrol. Victor Hugo, author of the Tyrant of Padua, was revisited again when the company tackled a funnily-dark L’Homme qui Rit. Edgar Allen Poe’s Double Assassinat dans la rue Morgue, translated from English into French by no lesser than celebrated writer Beaudelaire, added a twist of whodunit to the repertory. Even Goethe’s Faust got a makeover so riveting, the venerable and innovation-minded German prince of poets would have wholeheartedly approved.

But whoever the author, whatever the oeuvre, each and every production is a reaffirmation of the Correira/Boghossian cineatric signature. And without fail, every piece of literature revisited centrally revolved around humanity in all its glory and all its imperfection. The undercurrents are what interest Gaële and Paulo more than anything else, and they manage to coax those out of a play in unsurpassed fashion. The human and artistic intelligence never fails to leave the audience in awe. Collectif 8 never judges, never criticizes, never preaches… it just holds up a mirror, and it is up to the audience to transpose the message to modern days.

Currently, the spotlight is on Diderot’s La Religieuse (The Nun), the play which won the jury’s and the press club’s awards at the annual theatre festival in Avignon, and which was also the headliner of the recent Quinzaine des Théâtres in Nice, performed at Théâtre Francis Gag. This two-actor play represents the ego and alter-ego of Suzanne Simonin, a woman caught up between what society expects her to be and who she really is. Gaële Boghossian and Noémie Bianco, both equally majestic in their roles, bring to light the struggles of times gone by, which are in fact highly topical and more relevant than ever: indoctrination, keeping women in a state of ignorance, the objectification of an individual, and her virtual disappearance in the community she lives in. The label of a Christian nun is arbitrary, this might just as well apply to other groups of today’s society.

But C8 is not only the best but probably also the hardest working theatre company of this region. Only when you are privy to one of their rehearsals, you truly understand and appreciate the incredible amount of work that goes into these ephemerally light plays. Perfection down to the minutest details. Endless repetitions. Constant tweaking, improving, and finetuning of the video artwork for optimized cinematographic effect. Costumes, lighting, music, ambiance, angles, volume…. absolutely nothing escapes Gaële and Paulo’s detailed research and critical review. Professional theatre work at its finest.

And they are easily the most prolific company: while still playing La Religieuse (see below for details of upcoming shows), they are currently already preparing George Dandin, Molière’s social comedy about a husband who marries “up” and has to put up with his wife’s extravaganza. Still an implicitly critical adaptation, it is a bit more lighthearted and comedic than some of their other creations… typically Molière, one would argue. Here, Paulo Correia – equally at ease as a director and an actor – slips into the role of Dandin. The play is currently created at Anthéa and set to premier on January 4, 2017, followed by several more dates through January 17. But not content with just playing regionally, Collectif 8 is constantly on the road across the country. And just confirmed, their 2017 participation at the Festival d’Avignon with Faust and La Religieuse. An absolutely packed schedule, but this company has the energy and enthusiasm to pull it through, and to go from good to better all the time.

The Pride of a Region

With such creative intelligence and superb artistic skills, Collectif 8 singlehandedly elevates the Niçois region to international theatre status. Many a Niçois regrets the company’s departure for Antibes but fortunately, it is but a short distance to travel, and thousands are happy to make the trek each season. The company is also a tireless ambassador of culture far beyond the borders of the département, frequently touring the country and performing at high-profile festivals. It is their artistry, discipline, excellence and sophistication that sets Collectif 8 apart from other companies and that makes them overcome the challenges that most colleagues face on a daily basis. This is a company we are fortunate to have in our backyard, are incredibly proud of, and that we will see, sooner rather than later, on grand international stages.

La Religieuse at the Anthéa