A fulminant production of Victor Hugo’s ‘Angelo, Tyran de Padoue’, is ringing in the 2014 season at the Théâtre National de Nice.

Padua, 1549. Angelo Malipieri reigns over the city with an iron fist. He is married to Catarina but jealously loves Tisbé who is in love with Rodolfo who loves Catarina, just like Homodéi does. Beyond all romantic entanglements though, this strange quintet plays political and religious power games. What do they want, who will win, and what values will prevail?

Written in 1835, ‘Angelo, Tyran de Padoue‘ contains the very themes that mattered to Victor Hugo and keep reappearing in his work: Love, freedom, injustice, history, human rights, women’s rights, faith, and the analysis of arcane politics. As in many of Hugo’s plays, women in particular have a key role in Angelo as they struggle to emancipate themselves, win greater freedom and influence…. and eventually, regardless of individual destiny, find a shared cause to identify with.

Equally present is another hallmark of Victor Hugo’s plays – the effortless marriage of juxtaposed elements like comedy and tragedy, the sublime and the grotesque, light and darkness, and the full range of human emotions. 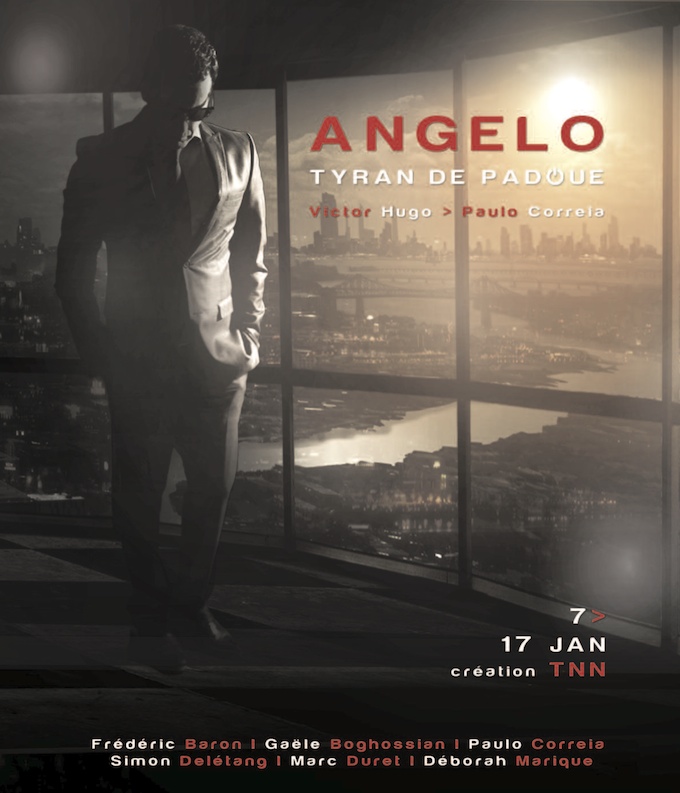 Under the spirited direction of Paulo Correia, these timeless themes take on a contemporary flavour as the talented cast of Collectif 8 transforms the play into “cinéâtre”, a mix of art forms it has been exploring over the past years by transcending the borders between classic stage theater and film and video elements.

Based in Nice but renowned far beyond la Countea, Collectif 8 consistently delivers quality productions of remarkable artistic creativity. “…a theatrical experience that is rooted in the depth of the past to explore the poetic, dramatic, social and political horizon of the here and now,” is the troupe’s leitmotif. And it certainly succeeds.

In ‘Angelo’, Collectif 8’s own Gaële Boghossian shines in the role of La Tisbé, while guest star Marc Duret skillfully develops the Tyrant into a deep, dark, complex, and multi-dimensional character. Déborah Marique (Catarina), Frédéric Baron (Rodolfo), and Simon Delétang (Homodéi) round out the quintet in lively representations.

‘Angelo’ also marks the debut of the Irina Brook era. The new artistic director just took over from Daniel Benoin who left the TNN at the end of 2013 after a successful 12 year tenure. It will be interesting to see if her arrival already bears an early influence on this production… the eyes of Le Tout Nice, and those of theatre lovers around the country, will be watching.

‘Angelo, Tyran de Padoue’ runs from Tuesday 7th, to Friday, 17th January in the Salle Pierre Brasseur of the Théâtre National de Nice. Tickets cost from €8 to €40 and may be reserved online.