While Black French humorist Donel Jack’sman deflects a vile insult from a spectator in mid-show with grace, the depth of racism running rampant in Nice is exposed

It must take a special kind of cretin to be a blatant racist, buy a ticket for a show featuring a Black entertainer, and then, shrouded in obscurity in mid-performance, hurl a violent racial slur at him from the audience – not once but thrice. If this sounds like a scripted scene to promote the artist, you may rest assured that it was most decidedly not… it really happened, live, at Théâtre de la Cité in Nice on December 23, 2018 when multi-award winning French humorist Donel Jack’sman aka L’Homme au Maillot presented his current show La Cigale.

In his one-man stand-up comedy, French-born Donel Jack’sman frequently takes on the question of bridging his family’s Cameroonian roots with his own lifetime impregnation of French culture. He does so delicately, wittily, without offending, but he does also not shy away from naming names.

La Cigale, which has successfully toured since October, references the Front National, France’s ultra rightwing populist party. At that point in the show, a single clap emanates from the audience. Donel, professional showman that he is, ignores it and carries on, but shortly afterwards, vicious abuse, akin to the N-word, is hurled in his direction. Three times. In the seconds that follow, Donel thinks on his feet and calms the arising tension by joking about it. But of course, after such an ugly incident, neither the artist nor the audience can fully get back in the cheerful mood.

Regrettably, racism is on the up in France in general, and in Nice in particular. Far be it from us to debate the pros and cons of French immigration policies. Suffice it to say that Nice, despite its ostensible pride in its history as a place as the crossroads of North and South, East and West, has traditionally been a place of “us versus them”, Niçois against the rest of the world.

Théâtre de la Cité, one of the city’s most beloved stages, has proactively counteracted this latent hostility against all things foreign by producing, year after year, an eclectic, multicultural programme where everyone, no matter where they are from, what colour their skin, and what deity they may pray to, has his or her rightful place on stage. Director Thierry Surace has this philosophy in his genes, he translates it into artistic vision, and while he was not in the audience on that particular night, he was just as shocked as dismayed as everyone else. 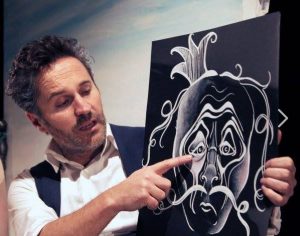 “How can this possibly happen at an artistic venue?” Thierry Surace ponders, but promptly supplies his analysis. “Society is in crisis. We feel the tensions of xenophobia at each economic crisis. Also, with the freedom of the net, we believe that we can say anything without any consequences, even gratuitously making fun of and hurting others.“ He recounts how just a few weeks ago during a performance for students, a group of boys whistled at an actress at each of her entrances. “It was such a violent insult. But unlike in a comedy show where one can improvise, a play does not allow for spontaneous reaction.” Thierry applauds Donel for stopping the building momentum in its tracks, and for verbalizing the feeling of shame felt by everyone in the room but the perpetrator. “The comedian answered smartly, defusing a situation that was in danger of escalating, as some spectators and staff members were going to intervene.”

The artist himself comments rather drily if not with a note of bitterness. “So here we are in the 21st century, in a theatre. When I heard that comment from the audience member, I asked him ”sorry?” twice to give him a chance to say he was only kidding, but he repeated his insult, even confirming the third time round, “I said ‘N….’ “. Having grown up in the projects of Villiers-le-Bel, a downtrodden Parisian suburb, Donel’s gut reaction is to jump at the man’s throat and rough him up but he immediately catches himself, knowing that there is no point in answering violence with violence. “My shows are about tolerance, living together in harmony, and getting along”. But he also understands that as a person of public interest who represents many others who suffer from racism and verbal attacks on a daily basis, he has an obligation not to let this slide, and he is taking legal action. “I’m not really into filing law suits. But it is a matter of social interest, not just for Blacks and others who are affected… even if it is only one complaint amongst thousands…”

37 year old Donel Jack’sman, who has won numerous prestigious awards for his work, is also known for his humanitarian engagement. In October 2018 he spent time in Cameroon collaborating with French NGO Solidarités, which provides universal access to drinking water and sanitation in the world’s most critical crisis zones.

On social media, the general audience was harshly criticized for laughing at the racist slurs and not intervening right away. But Donel Jack’sman defends them. “At that moment, they couldn’t know if what was happening was real or not. Also, laughter is often an unconscious escape from embarrassment or misunderstanding. The situation was confusing.” The humorist would even have liked to talk to the offender after the show but the man had already vanished into thin air.

Meanwhile, Théâtre de la Cité vows not to let up its commitment to a programme that is more eclectic and colourful than any other in town, with a goal to connect people of all walks of life. Although great French authors like Molière and Edmond Rostand do get their honoured place on the playbill, innovatively interpreted by TdC’s own Miranda company, the programme rather favours humour, music, dance, fresh angles, conviviality, and a pinch of reflection. This is where Sheherazade fills 1001 nights with hiphop tunes, where Galilei ponders his fate between science and church, and where cheeky Riviera Burlesque, brainy Collectif La Machine and funny Monsieur Mouche hang out. Clowns, cabaret, comedy and culture, all in one easily digestible bite. One of this season’s highlights is actually coming right up: Joséphine Baker – yes, sorry, Mr. Racist, another Black artist! – the highly recommended show telling the life story of the American-turned-French musical show legend.

The TdC is a theatre, and traditionally has been one, where everyone is welcome except one kind: racists. To the coward from the audience the night of Donel Jack’sman’s show: Shame on you. The winner of that match clearly are the artist himself, culture, humour, love, and the peaceful co-existence of people who appreciate and respect the beauty of the world in all its diversity.

PS: On January 7, Donel Jack’sman announced that in order to set a sign against racism he will be returning to Théâtre de la Cité in Nice for an impromptu charity show on January 27 at 18h. Revenues from ticket sales will go to two anti-racism organizations. Reserve tickets online. He will also do a second charity show benefiting the same cause in Paris on February 1.