A young cinephile designer from Bordeaux is the Arts & Smarts behind the most influential French movie blog of recent times.

Some people luck out. They find their passion early in life, pursue it, and do well. And then there are a handful of those who luck out doubly and find themselves in two thriving careers. Nicolas Dusseaut is one of those fortunate few. When he was born in Bordeaux in 1978, the design and the cinema muse both showed up at his cradle. And he certainly made the most of the gifts they bestowed on him.

Time travel back to the late 1980s, and the beautiful city of Bordeaux. A mother takes her young son to the movies. The St. Genès theater – alas now defunct – plays one film per week. And a whole new world opens up to the ten year old. Is it the Disney movie that grabs the boy’s attention? The popcorn and sweets concession? Far from it. He is in love with the big posters, and stands there often for an hour at a time, studying every last detail. He, so small… the poster, so big. The one that impressed him the most was Pet Sematary. Just an average movie… but a brilliant poster. Its amazing, ghastly, scary close-up was enough for the boy to say, “One day, I want to be able to do that.” 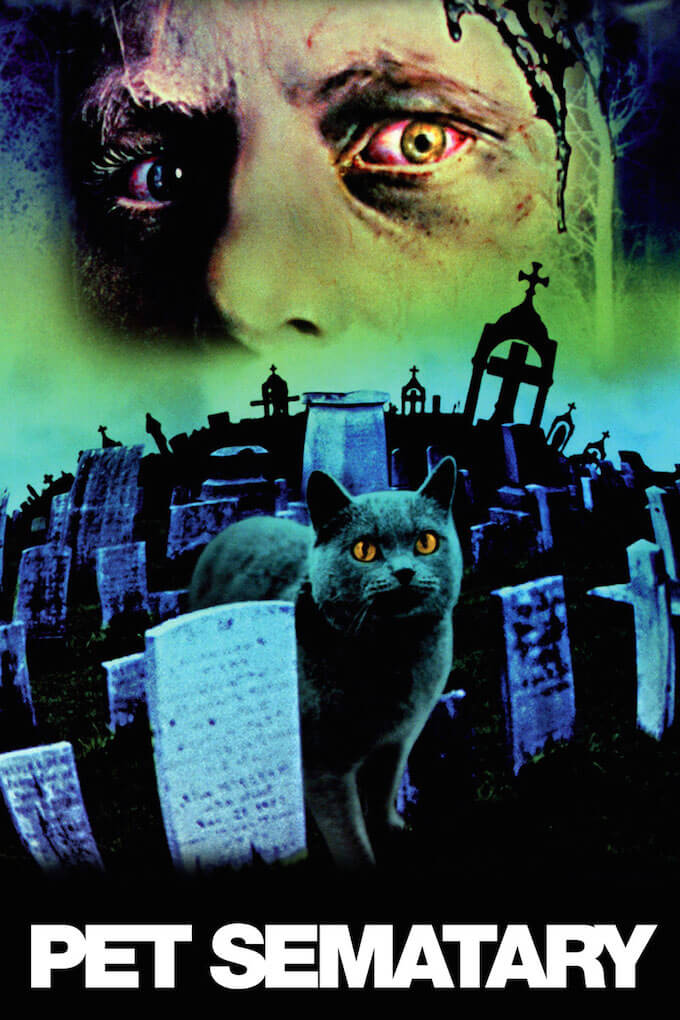 Jump forward, a few years later, now in St. Emilion in the picturesque South West of France. We are in grandmama’s living room, proudly featuring a small TV as the center piece (see lead image). Poor, grainy reception… but a big, big movie: Le Grand Bleu, the full version. Luc Besson’s early masterpiece, with Jean Reno and Marc Duret. And the same boy who a few years earlier was glued to the movie posters, is blown away by the story and the actors’ stellar performances, and knows, “I want to do something with film one day.”

And thus it all started.

When decision time in career matters rolled around, Nicolas chose to funnel his artistic calling into a respectable bread and butter career, becoming a graphic and web designer. After working in Paris for a few years, he returned to Bordeaux in 2008 to found Studio Baarone, and quickly made a name for himself. His eclectic portfolio of clients ranges from the Tourism Board of Gabon to the Tennis Club of Arcachon… from the finance to the construction industry… and even a non-profit organization from Benin serving malnourished children, Soleil d’Or.

But Nicolas never lost sight of his love for the movies and the promise he had made to himself as a young boy, to do movie posters one day. He starts playing with cinematographic poster design, and the results are stunning: 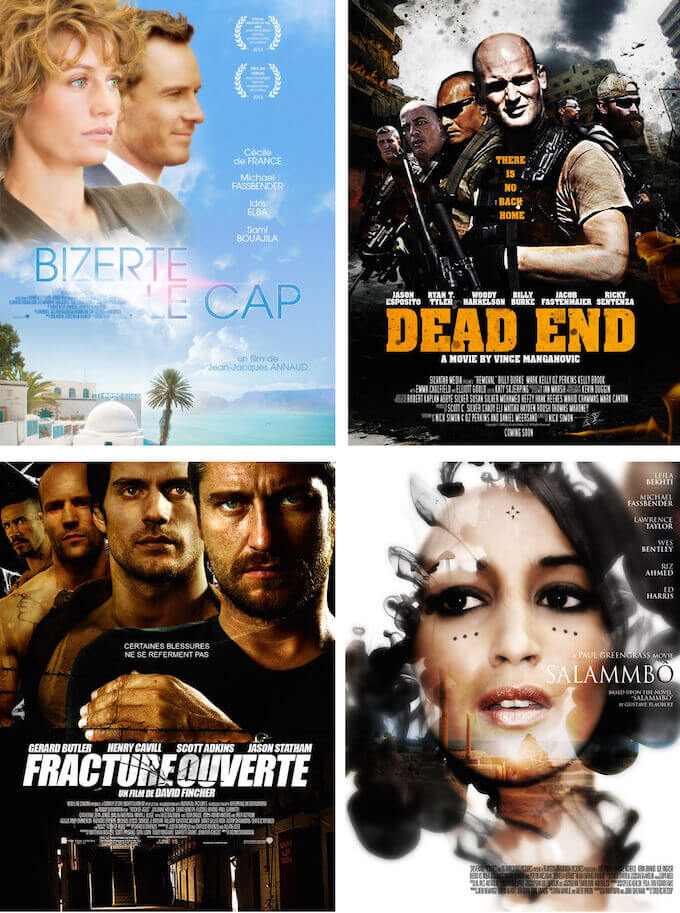 These are not actual movies but fictional ones, studies of the creation of a poster. In cinema, design does not equal design – movie posters are an art form unto themselves, and not an easy one to execute. They have to tell a story without giving away the plot, they have to pique interest and create an emotion in a split second. Everything is a message, from imagery to colours, from proportions to font, and it all has to come together to effortlessly present an appealing visual. A lot of technique for something that looks entirely effortless.

One fine day, Nicolas – who also has a knack for teaching – decides to share his experience, and he does so in typical millennial fashion, in a blog. He presents the movie posters and analyzes them from a graphic design point of view. Mood, technique, symbolism, the language of imagery, typefont, the use of tools like Photoshop or Illustrator…. He walks the viewer through every aspect, shares tips, offers commentary. And soon, the movie buff slides into discussing the film the poster belongs to. Not long after, long and detailed interviews with actors and directors join the party. And thus is born the go-to site for all things cinema in France, www.lesbellesaffiches.com.

Nicolas’ writing style – friendly, approachable, educational without being nerdy, elegant with a side of fine witticism – makes the blog immensely readable…. as informative as it is entertaining. He makes it clear, however, that he is not a movie reviewer or critic, he just analyzes them… his credo is not to turn something he enjoys doing into a chore.

But “analyze” is an understatement: he goes through them with a fine-toothed comb, scrutinizes the visuals, dissects the script from every angle imaginable, pokes around the most hidden corners on set, and peers into the deepest recesses of the director’s mind. All accompanied by a solid knowledge of cinematographic history reaching back all the way to the day Monsieur Lumière invented moving pictures. Nicolas’ knowledge puts an encyclopedia to shame. How come, we want to know.

“Back in the 1990s, my friends and I would watch VHS tapes all night long, often four or so in one sessions. It was the big era of horror movies, and some of them really scared me but I was so fascinated, I just kept watching anyway.” Gradually he acquired an understanding of different styles of directing, and a preference for Anglosaxon directors like David Lynch, Martin Scorsese, John Carpenter, and Francis Ford Coppola. “My favorite is probably David Fincher, he never disappoints.”

There is a big difference between the American and French school of cinema, he explains. Americans are proud of their industry, they are bold, have more money and experiment fearlessly, whereas French filmmakers are more drawn toward the artisanal, melancholy and drama, with little room for novelty, and work on much smaller budgets. And – to close the circle – all of that is also reflected in the posters, which are representations of individual cultural preferences.

The two actors who left the greatest impact on him over time are James Woods (The Onion Field, Ghosts of Mississippi, End Game) and French-Italian-American actor Marc Duret – the one Nicolas watched open-mouthed in Granny’s living room for the first time all those years ago. “Marc is an incredible actor. He has been in so many cult films – of course Le Grand Bleu but also Nikita, Dobermann, La Haine, and many others – that he singularly marked my youth and shaped my love for the movies. The second roles he often plays demand a much higher skill than the lead part because they are really the backbone of the story, and he brings something to a film that feeds it… that nourishes it.”

Small wonder therefore that Marc Duret was one of many Nicolas’ high-profile interviewees on Belles Affiches. Others on that list, Yann Danh (A Tout Prix) and Youcef Mahmoudi (Kosmodrome), two of the most talented and promising French film directors, each of whom has a mile-long list of awards to their name.

Beyond film and poster analyses and star interviews, LesBellesAffiches.com is a treasure trove of information – photography tutorials for instance, or comparative cinematographic case studies. No surprise therefore that is has quickly become the leading blog in its sphere, and the one every true cinéaste in France has bookmarked. The one small fly in the ointment, at least for now, is that the site is currently available only in French. Nicolas (pictured below) – who is perfectly bilingual – is considering an English version, but for now he still splits his time between the blog and his work as a graphic designer. Meanwhile, our thanks and compliments to the two muses who kissed this young creative artist – they must be quite content to see what has become of him. 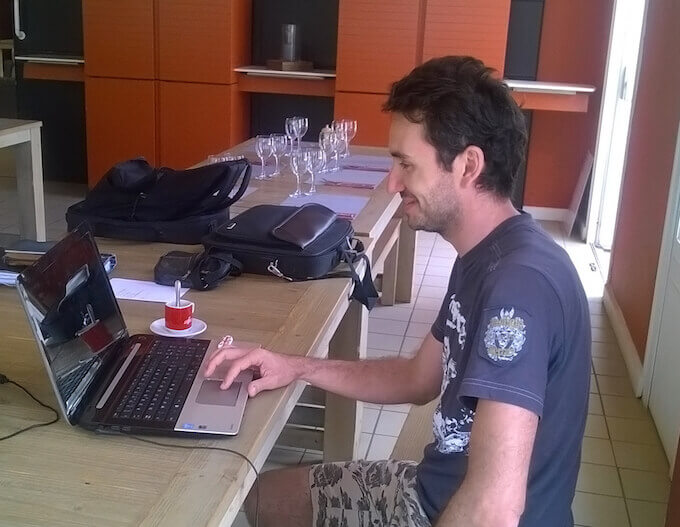