It doesn’t happen every day that a veritable Broadway star wanders into your office to promote, say, the Champs-Élysées Film Festival.

With an abundance of film festivals these days, especially in a cosmopolitan city like Paris, it won’t take long before your initial excitement wanes and you are becoming quite blasé about them. If you love movies made in Hollywood, New York or elsewhere yonder the Pond, a French-American film festival might still cause you to glance up for a split second. But then again, there is Cannes, so how could anything possibly outshine the Mother of all Film Festivals? Well, have another look at the Champs-Élysées Film Festival, it might just about be worth it.

Few American movie stars are as instantly and universally recognizable as Marilyn Monroe in her iconic White Dress from The Seven Year Itch, the graphic identity under which the fifth Champs-Élysées Film Festival, has been placed. But that’s not the only noteworthy feature – its content is indeed a viable alternative to the starpowered Cannes extravaganza. Held at movie theatres up and down the Glorius Mile from June 7 through 14, the festival casts the thematic spotlight on Chicago, featuring the best of French and American cinema under the motto of “Extending the cinema experience after the screening”. More than 80 films and 100 screenings in original language will be presented at the Balzac, Gaumont Champs-Élysées, Lincoln, Publicis Cinémas and UGC George V. And for the first time, a jury made up of six personalities will attend the festival, embodying both the present and future of French cinema and literature. 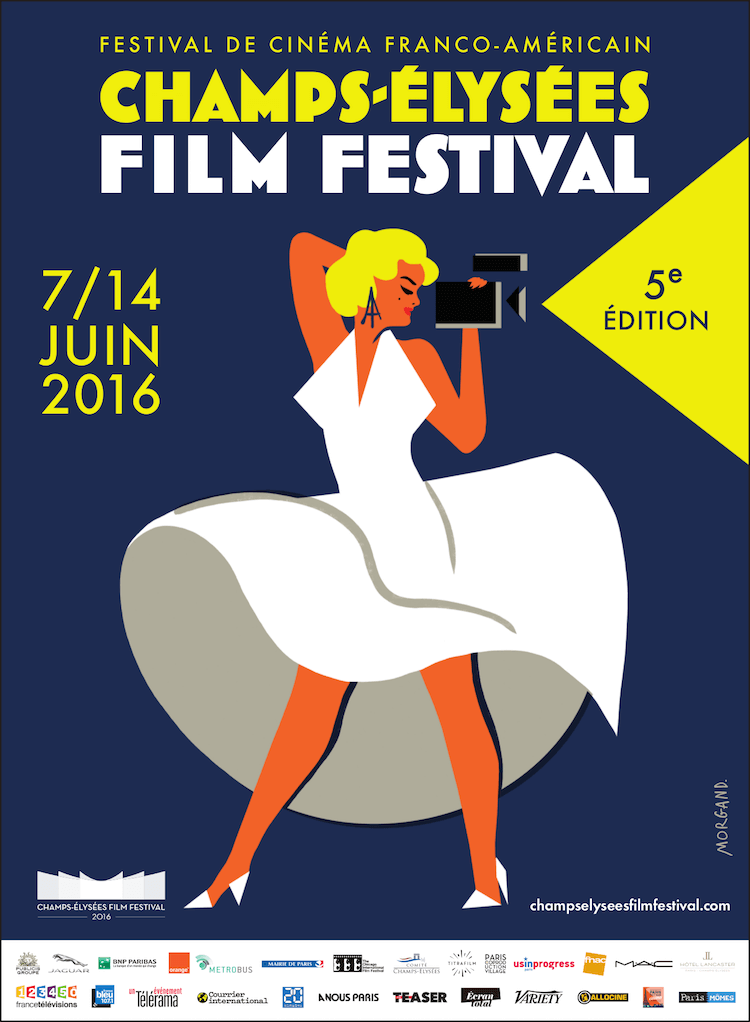 The weeklong programme is packed with one highlight after another, among them:

– A competition between eight unreleased American independent features,
– A competition between more than twenty American and French short films, up for the Audience Award for Best French Short Film and the Audience Award for Best American Short Film,
– French and American previews, presented by the film casts and crews,
– Four masterclasses by Nicole Garcia, Abel Ferrara, Mia Hansen-Løve, and Brady Corbet,
– A feature of the city of Chicago celebrating the 20th anniversary of the Friendship Pact between Paris and Chicago through three themes: Urban Atmospheres, a carte blanche to the Chicago International Film Festival, and the science fiction night,
– The American Spirit section, which focuses this year on the representation of politics in American Cinema, subtitled “Politics behind the Myth”.

Master classes, conferences and a special selection of films for the young audience round off the packed schedule. And not to be neglected, “Industry Days”, which aims to become a reference in professional meetings for French and European producers, with a strong positioning towards the enhancement of emerging cinematographies.

What does all of that to do with a Broadway star? Well, the festival organizers are fortunate enough to have Alex Ko work for them. Yes, THE Alex Ko – the American dancer, actor and singer who between 2009 and 2011 played the title role in the wildly successful Billy Elliot the Musical. How did that ever happen, we want to know. Turns out that two years ago, Alex abandoned New York and Broadway to relocate to Paris and venture into a new career in filmmaking. He is currently writing his first feature film. But beyond that, the ambitious 20 year old earns his keep by getting involved in the organization and promotion of events such as the Champs-Élysées Film Festival.

Quite a spectacular festival for Parisian cineastes who all throughout May had to train their binoculars down south to Cannes. And even better, admission is affordable, with regular screenings at €6 for all audiences, and previews and master classes at €10. Passes (€50/€35 for Under 26) are also on sale through the festival website.

So, have you seen Marilyn?