Your child is sick? No need to go in panic mode. Rx: Toubib’s Book “Urgences or not urgences”, a manual for parents how to handle Junior’s ailments (and survive the ordeal)

To Be or not Toubib… that is not the question – that is the pseudo of a French doctor whose social media posts about various health matters have turned him into an internet phenomenon in a matter of months. With currently 165,000 followers on Facebook and 15,000 on Instagram he has reached celebrity status, and the number of Likes and Shares to go with it. And now Toubib – who is in fact a bonafide medical doctor working “at a hospital somewhere in France” but prefers to remain incognito – is about to launch his first book.

Written in his trademark style of packaging solid information in humorous and easily digestible morsels, “Urgences or not urgences” is a manual for parents to assess the severity of their offspring’s condition – can they handle little Louna’s upset tummy themselves (following Toubib’s advice) or does it warrant a trip to the ER? 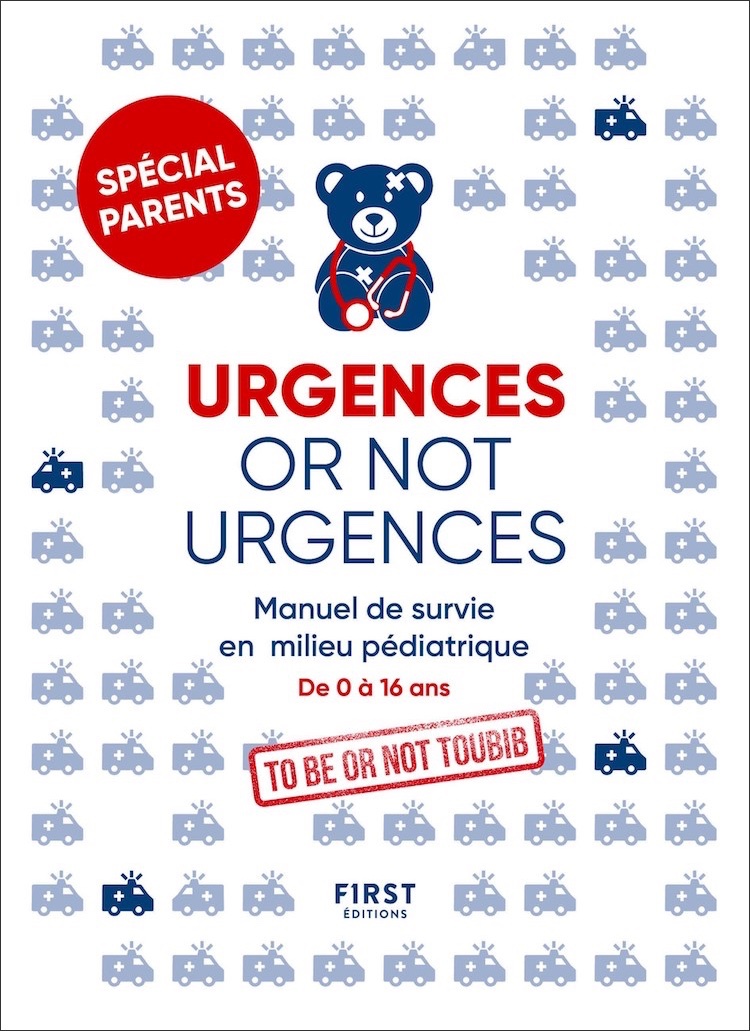 Parents quickly fear the worst when their child is not feeling well. But where things really get complicated is at the doctor’s office. When the man or woman in the white coat throws around big words like “pathological”, “hyperthermal crisis”, or “mesenteric adenolymphites”, the average parent is out of their depth but doesn’t feel comfortable asking too many questions for fear of being judged. “Of course! When my car mechanic starts talking about valves and pistons, I’m lost, too!” Toubib says.

And that’s where his inspiration for the book comes from: explaining medicine and health problems in simple, accessible language. And not only that: the good doctor has a great sense of humour that he drip-feeds straight onto the pages in 23 short chapters that cover the most common children’s health problems and what to do about them. Additionally, seven one-page flash cards with the most frequent health scares from fever to constipation, reflux, head trauma, atopic dermatitis / eczema, diaper rash, and asthma attack can be copied and given to grandparents, babysitters, or the parents of sleepover buddies. 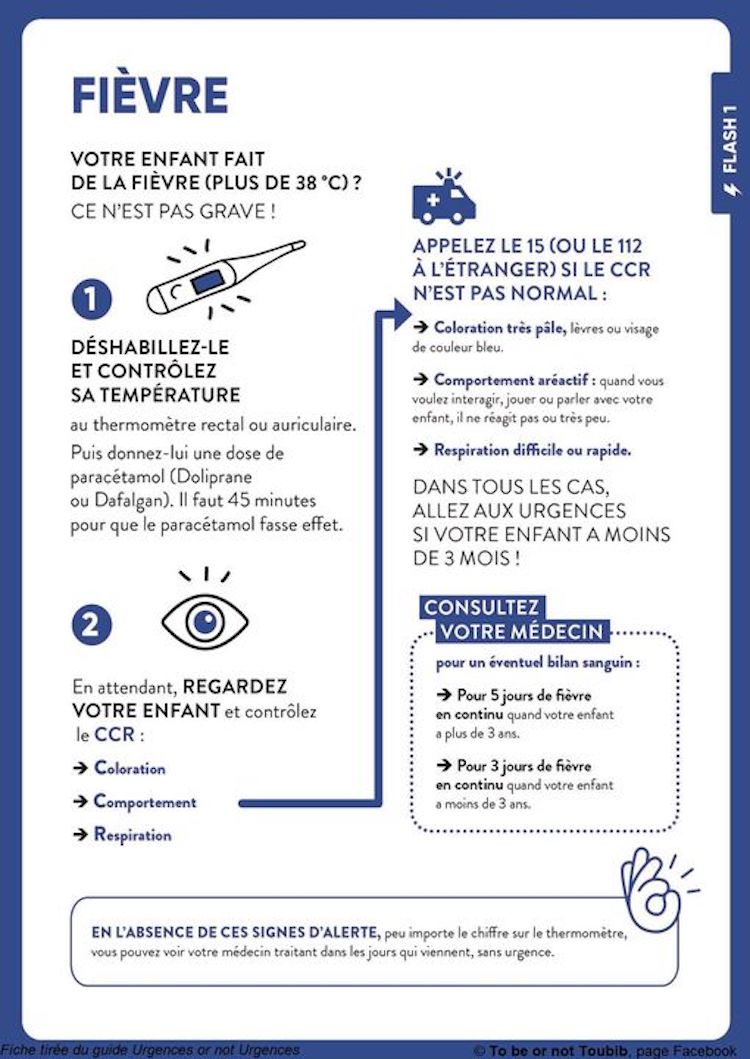 But before the book came a simple Facebook page in “Medicine for Dummies” style. He had an original goal of 1,000 followers when he started it a year ago … and today his fan base is well into the six digits. No subject of general medicine is taboo, and lately Toubib has had to explain and re-explain and re-re-explain Covid and vaccines (spoiler alert: he supports them and he explains his reasons in multiple FB posts dedicated to that topic.) The language he uses is deliberately simplified, and his posts are so jam-packed with emojis that the casual onlooker might get the impression this is a 15 year old that just discovered how to play Dr. McDreamy of Grey’s Anatomy on the internet. But it’s all just a way to get the message across in a pally kind of way. And his original style works.

So what qualifies this anonymous poster to shell out medical advice? Well, turns out Toubib is indeed a highly experienced general practitioner with an inter-university qualification for pediatric emergency medicine, a university teaching degree in anatomy, and a thesis in pediatrics to his (real) name. And all of that at the tender age of 32. But vanity and stardom is not the name of his game. “Of course, I could put my name on the cover of the book along with the snazzy title of ‘Doctor’. But I don’t feel like having underwear thrown at me every time I am leaving a bookstore,” he explains with his typical sardonic humour. 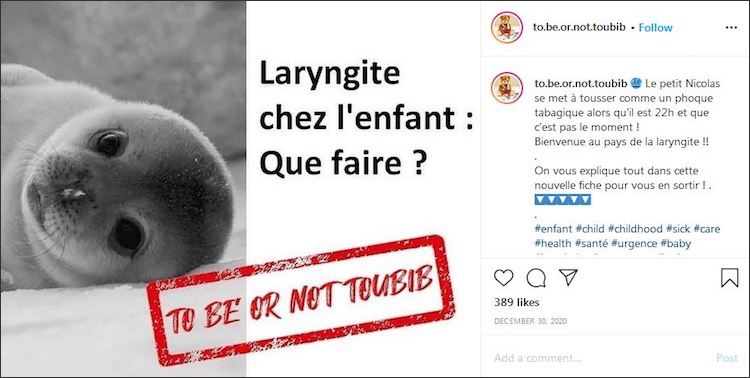 And he also wants to downplay himself for the simple reason that it’s first and foremost about the parents. He wants to take the stress out of a challenging situation. “Because being a parent is complicated. Even more so since the transmission of knowledge happens so fast today…. Add to this a society where you are constantly told conflicting things, and you find yourself in a state of panic.”

This guide for parents of children age 0 to 16 is therefore the result of ten years of hard studies and experience in pediatric emergencies, distilled into a palatable essence of clear information, accessible to all. It shows that while no child’s sickness is trivial, parents don’t immediately and automatically have to fear that a cough is stage four lung cancer. This not only reassures families, but learning to assess whether or not the situation at hand requires a trip to the pediatric ER also helps relieve the congestion there. 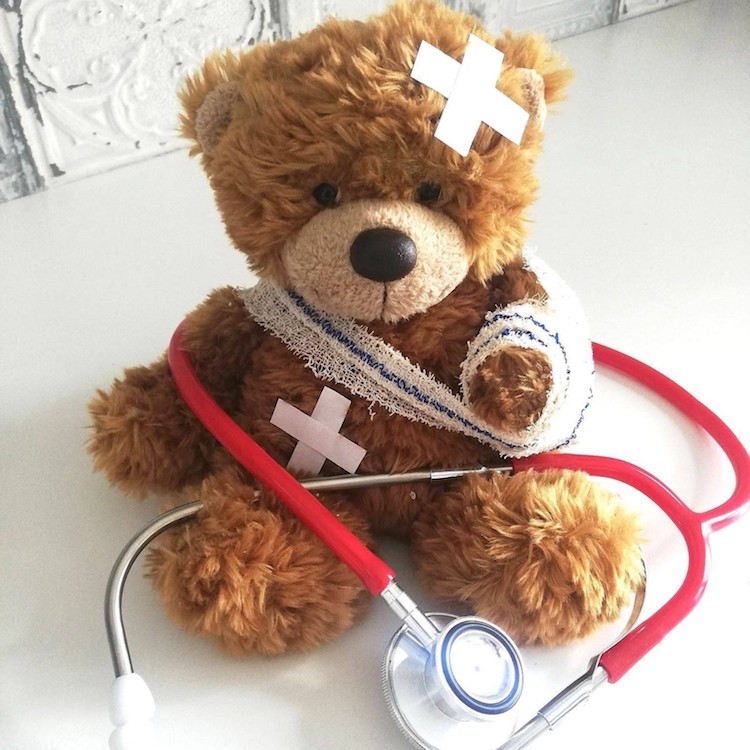 So relax, most of your progeniture’s booboos are probably quite harmless and manageable, especially when you stick to Toubib’s recommendations. But there is of course the classic disclaimer that this book is not a substitute for real medical consultation. In case of doubt – even after reading the guide -, call your national emergency number (in France: 15) for telephonic advice, or ask your doctor.

Does Toubib have any conflicts of interest, does Big Pharma finance him a stable of luxury cars and exotic travel? “If only! In reality, when I mention names of medicines, it is simply because at some point, you have to talk about what’s there in a pharmacy. If you find the medicine under another name, but that it is exactly the same molecule (generic or not), take it, who cares? You’ll just have my next Porsche on your conscience, that’s all….” he grins. And he gives one final piece of advice to parents: “Remember that just because you didn’t study medicine, it does not mean you are totally helpless in the face of your child’s ailments.”

Urgences or not urgences (96 pages, Éditions First, €8.95) appears in France, Switzerland, Belgium, and Luxemburg on January 21, and shortly thereafter in Quebec. It is currently only available in French, and is sold at independent bookstores and all the usual mass outlets (FNAC, Furet du Nord, Cultura, Decitre, Auchan, Leclerc…) as well as online at FNAC, Amazon and the like.