A new exhibition in Genoa, Italy, shows what happens when you give contemporary artists a piece of denim to play with. It also sets the history of jeans straight.

Chances are that Christopher Columbus wore jeans when he set foot on the continent he was to name “America”. They were, after all, the standard garb of a working sailor, just as denim would have been the fabric of choice for his flotilla’s sails. And a few centuries later, Nice’s very own hero Giuseppe Garibaldi was known to sport the sturdy pants on battle fields around the world.

But historic use of denim aside, a current exhibition in Genoa, Italy, titled “From ArteJeans’ Genoa Blue to Yves Klein’s Infinity” focuses on what contemporary artists can do with a piece of denim canvas. And while at it, the expo – the brainchild of historian, author, and Genoa’s Ambassador to the World Francesca Centurione Boschieri – also cleans up two other often-told but patently untrue legends about everyone’s favorite garment: Contrary to popular belief, it was not Levi Strauss who “invented” jeans although he helped commercializing them; nor was denim an American product – it actually originated in France. But to comfort our American friends, it took the likes of James Dean, Elvis, and Marilyn Monroe to make blue jeans go from “work clothes” to “cool fashion statement”. 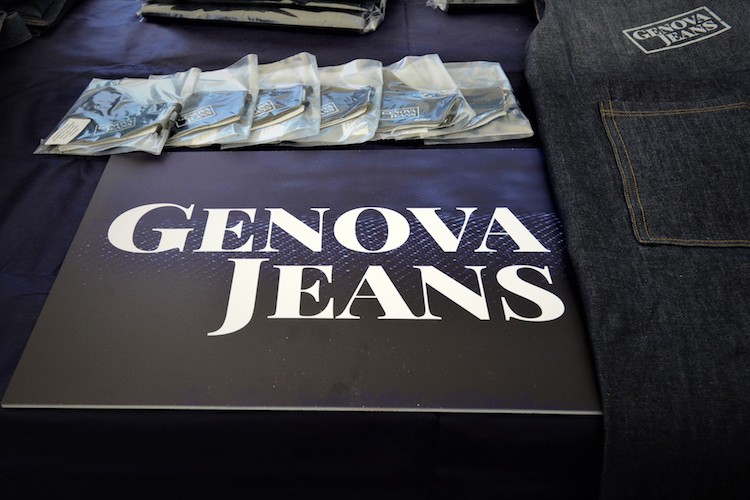 But how did jeans get to be the star of a current exhibition at Genoa’s Villa Croce Museum of Contemporary Art? In fact, nothing could have been more natural. When the renowned cultural institution developed its 2020/21 fall/winter season, it picked the colour Blue as its theme. “Blue”, as they describe it, “the visible idea of infinity, the most metaphysical of the colours of the rainbow as well as the palette of each ancient, modern or contemporary painter”, has been favoured by artists since times immemorial. Prehistoric African cave men used it, as did the artists of Lascaux. In ancient Egyptian art it represented “the heavens and the universe”, and it also was prominently used throughout the Middle Ages in sacred and profane art. Even to this day many modern and contemporary artists make it a focal point, just think of Picasso, Frankenthaler, or Dufy.

This is why the celestial colour is the star of the museum’s current expo, featuring artists from Bernardo Strozzi’s 17th century blue to Rocco Borrella’s “Cromemi”, by way of the Fluxus constellation, Yves Klein’s rich lapis lazuli, and Magurno’s prints. 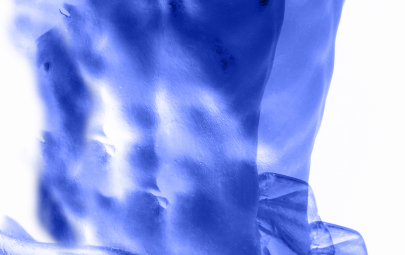 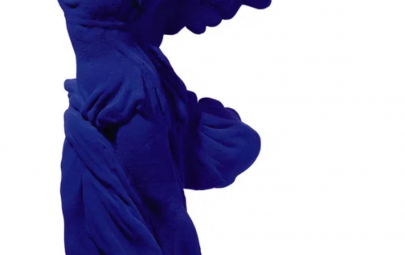 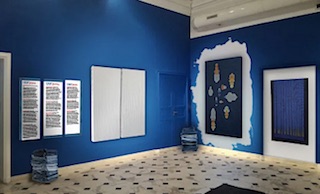 And from here it was not a big stretch of the imagination for the organizers to include the unmistakable indigo blue that make jeans, jeans. After all, Genoa is where the original fabric comes from. Jeans have actually been around in Italy and France for about 600 years, and the material they’re made of dates back even further.

By the time Christopher Columbus was born in Genoa in 1451, the city already had a centuries-old tradition of making fabrics. The Ligurian capital was also a major European trade and military port, and workers and sailors liked to use a particularly robust cloth called “Geanes fustian”, made of Arab cotton, for work pants and sailcloth. Scraps were then used to insulate houses. The readily available indigo dye gave it its characteristic shade of blue, and so what was known as “Bleu de Gênes”, eventually became known as “blue jeans” in the New World.

To honour the city’s history with jeans, the exhibition organizers therefore invited 26 artists of different generations and styles to contribute to the ArteJeans project. Each was given a 200×180 cm piece of fabric from the renowned Candiani Denim weaving mill, and a brief to do whatever they wanted with it. The resulting 24 works – one artist had already displayed in a 2019 show, and two collaborated on one canvas – are on preview here before being donated to the city of Genoa for inclusion in the future Museum of Jeans, slated to open in 2021 for a yearlong citywide celebration of the iconic garment. Although currently subject to temporary pandemic-related closure until further notice, this show is scheduled through January 17, 2021.

But using Genoa moleskin as a canvas is nothing new. Even medieval artists had already discovered the virtues of this material: “Fourteen huge sheets of linen and cotton dyed with indigo are painted in white in 1540 by Teramo Piaggio and collaborators to involve the faithful in the mysteries of the Passion of Christ”, Francesca Centurione Boschieri explains. “These magnificent paintings retrace all the stages of religious drama inspired by the engravings of Dürer and Raphael. Exhibited at the Genovese Diocesan Museum, we can fully consider them ancestors of “jeans””. 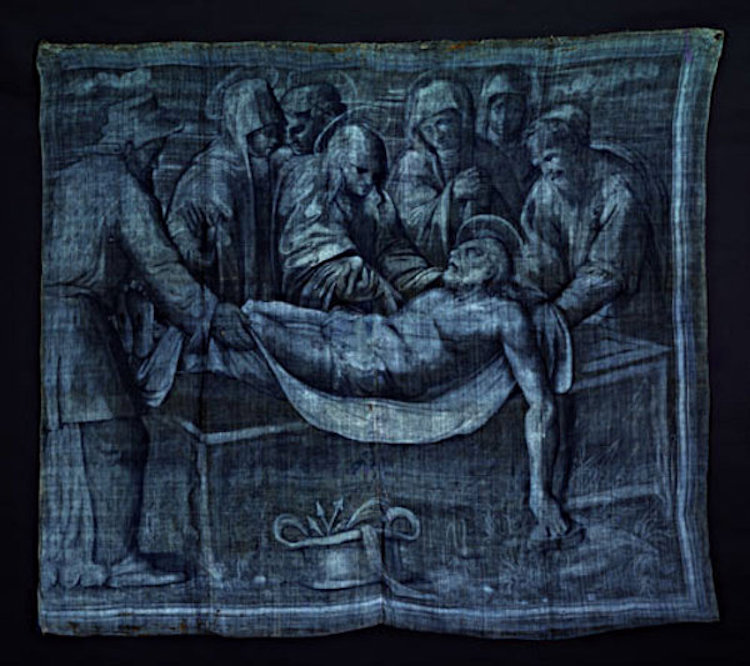 Italians were not the only ones, however, who knew how to make sturdy fabric. The Southern French city of Nîmes produced twill that resembled jean but was even tougher. It became known as “serge de Nîmes” which eventually morphed into “denim”.

Subsequently, large quantities of both fabrics were imported to England during the 16th century to outfit English sailors and military with work pants. But making those was of course still largely a cottage industry. Still, the material would eventually also find its way to the New World as merchant cargo.

By the 19th century, versions of both fabrics were made in America, but used in very different ways: Genoa jeans became the outfit of choice for office workers, while manual laborers opted for the sturdier denim. But it took a Nevada tailor named Jacob Davis to make denim everyone’s go-to fabric in the mid 1850s: Jacob specialized in denim work pants but he noticed they tended to rip at the seams. So he used metal rivets to reinforce them… an idea he patented with the financial help of a German-born Jewish immigrant to the US, the owner of a family-run wholesale business selling linen and cloth. His name: Levi Strauss. And soon “Levi’s waist overalls” were the most popular workwear in the West. 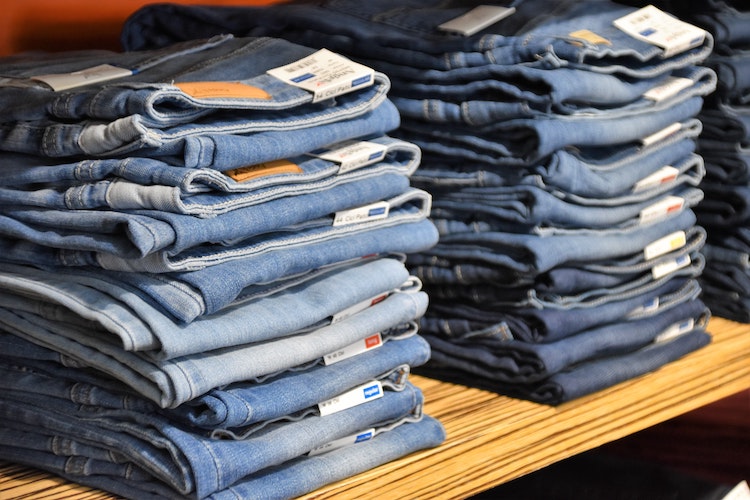 They gradually became popular outside work as well. In the mid 20th century, movies helped champion their success – cowboys, sheriffs, rebels, and sex bombs wore them, and fans wanted to emulate their heroes. Over time, fashion designers took them on, giving them a makeover that ranged from a variety of colours other than blue, they ripped, stonewashed, bleached, cropped, boyfriended, skinnied, and flared them… turned them into shorts, skirts, dresses, and even evening and brideswear… but a well-worn, classic, fits-like-a-glove pair is still everyone’s favorite.

Meanwhile, “Geanes,” that other work fabric, faded in popularity… but the word didn’t. People just called their waist overalls “jeans.” In 1960, Levi’s gave in and started using the term too. And that’s how an American invention, made with French fabric, got an Italian name. 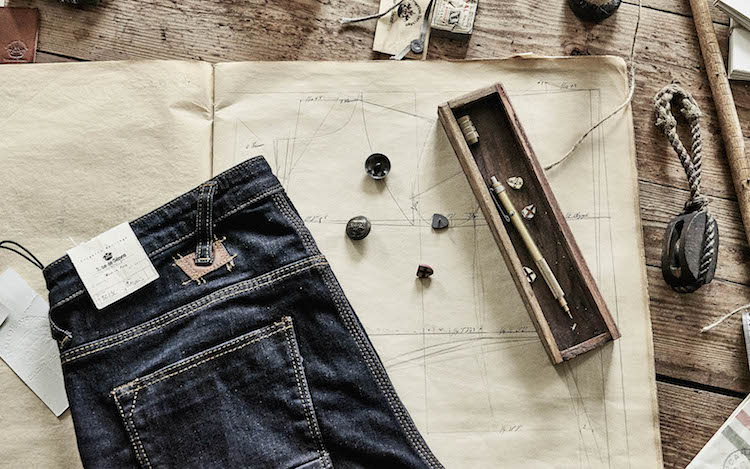 By the way, if the name “Blue de Gênes” rings a bell, you are quite right. It is a bespoke brand that designs and creates jeanswear with strict respect for its heritage. Its most popular style is called Repi … a tribute to another world famous jeans-wearing son of Genoa: Renzo Piano is the architect who built Genoa’s new bridge after the 2018 collapse of its predecessor. And forward-thinking as he is, he likes to use recycled scraps of denim as wall insulation. Isn’t it amazing how circular life sometimes is?