A plaque in the centre of Nice is a chilling reminder of one of the saddest episodes in recent history, during the German occupation of the city.

With its beautiful Belle Époque architecture, its four stars and ideal location right in the centre of Nice, the Excelsior hotel is one of those places where tourists come to enjoy the sun and all the delights of the French Riviera.

But just across the street, a commemorative plaque tells a very different story. A story of death that needs to be told and shared so future generations will never forget the drama that took place there more than seventy years ago, during the Second World War.

After the fall of France in 1940, Nice was in the unoccupied zone and despite the anti-Jewish legislation soon after enacted by the collaborationist regime of Vichy, it became a safe haven for Jewish refugees who fled to the South hoping to stay out of the Nazis’ reach.

When the Allies invaded North Africa in 1942, the Germans and Italians occupied the rest of France and Nice fell under Mussolini’s rule. However, Il Duce had no intention of collaborating with the Vichy regime. He refused, for instance, to implement the obligation for all Jews to wear the yellow star as it was “inconsistent with the dignity of the Italian army.” 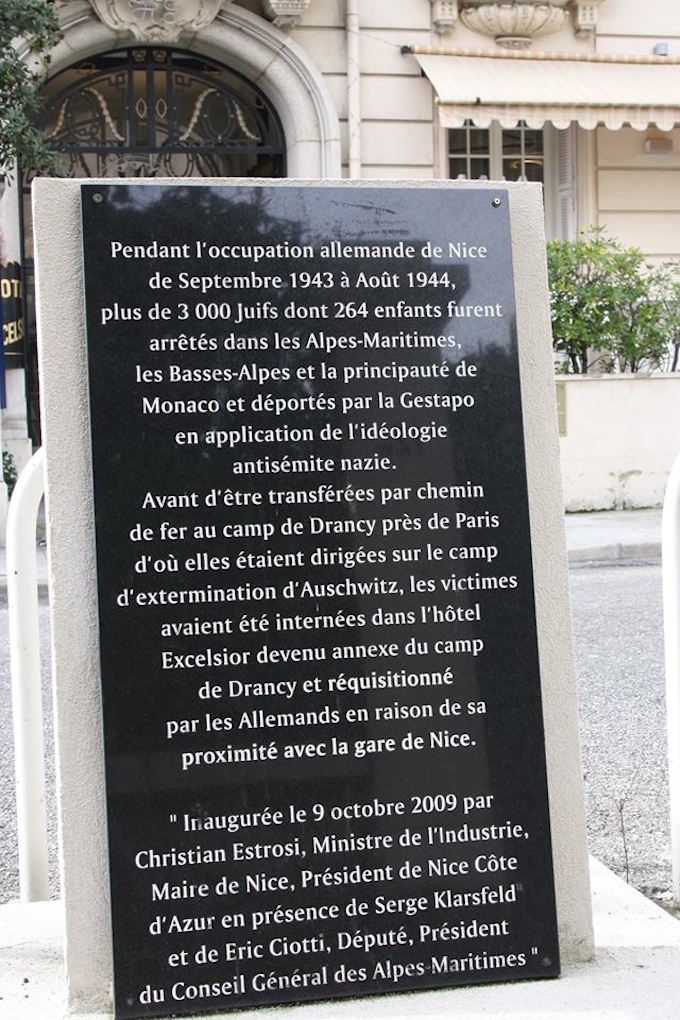 This all changed unfortunately in 1943 after Italy surrendered on 8th September and the Germans moved into Nice. Two days later, Nazi war criminal Alois Brunner, a top aide to Adolf Eichmann, strategically set up his headquarters at the Excelsior, and immediately started organizing some of the war’s most violent raids against the Jews.

Teams of SS officers routinely patrolled the city, snatching anyone off the street that looked “Jewish.” The concepts of nationality or mixed marriages, the age of children, or the infirmity of people stood for nothing, and the simple fact of being circumcised was enough to be arrested.

From that fateful day in September up to the time Brunner left Nice, a total of about 80 days, no less than 2,142 Jews were rounded up and sent to the hotel. There, they were registered and then sent to the death camps via the nearby train station.

When inaugurating the plaque in 2009, Mayor Christian Estrosi said that the hotel today still bears today the trace of the sufferings of so many Jews who thought Nice was a safe place for themselves and their families. Anyone who walks by it and takes the time to read the plaque won’t be able to forget them now.