Beyond her lovely face and personality, the 2012 Masterchef fan favorite Tamara Gréboval packs a mighty punch.

Although a lifelong devotee of cooking and eating, a culinary career wasn’t what Tam initially went for. Instead she initially embarked on biochemistry. And then went for a Master’s in Business Administration and Finance. And THEN got a degree in IT. Did we mention she is the mother of two daughters? All of that by her early thirties. Are you getting the idea of someone with tremendous energy and ambition?

Fortunately, this very ambition eventually did lead her to trade her desk job in for one behind the stove.

Yes, she had always enjoyed cooking and recreationally participated in competitions, with results so good that she won the Coupe de France 2011. And then graduated from the coveted Paul Bocuse Institute training program. But it still took her friends a good measure of persuasion to get her to sign up for the third season of Masterchef. And needless to say that after intense casting, Tam won one of the handful of finalist spots on the show, out of 24,000 competitors. 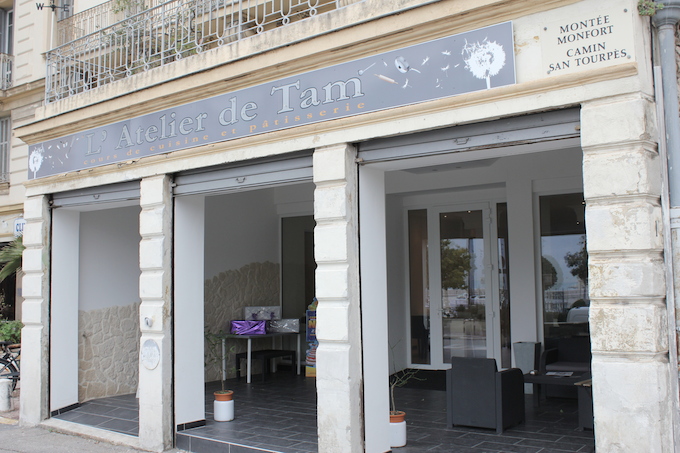 “It eventually all fell into place naturally”, the pretty Cannoise with Haitian roots tells us. “I grew up around food and cooking, and for me it’s all about the pleasure to share, moments spent with your family and friends.” Her enthusiasm is palpable. And she indeed shares her joy of cooking with the public these days. In November 2012 she opened her “Atelier de Tam” on the fringe of Vieux Nice where she has since been teaching cooking and baking classes.

Still, it was not an easy decision to leave her cushy, well-paying job in financial administration. “It was actually pretty scary to go down this route. But I knew that that was what I really wanted to do. And then I found this space here, and it was love at first sight.”

You only have to set foot into the atelier to know what she means. A clean, bright, airy, well-appointed, serene space facing the port, centering around a huge worktop with integrated stove top with plenty of room for her students to comfortably congregate around. One large wall is designated to eventually display some of her own art work…. painting is yet another favorite occupation of Tam’s because to her, all creative outlets are related in some way. 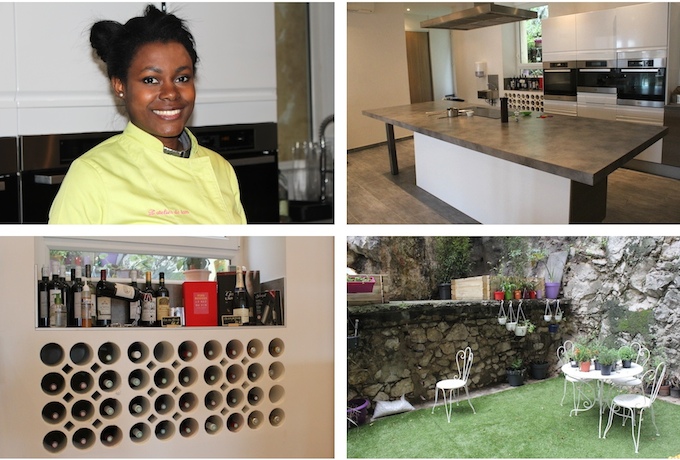 In the back of her atelier, there is also a small garden where Tam grows herbs and edible flowers. “I love exotic plants, and I enjoy integrating them in my cooking, even though my style is first and foremost traditional, definitely Niçois-influenced but with a contemporary edge. But I am also big on fusion cuisine, and I really adore Asian food.”

So is Tam happy with the first year of her atelier? “It’s a huge amount of work and responsibility but I really love it and don’t look back.” Mother to two seven and nine year old daughters, she also gets support from her husband who is a firefighter. It’s not always easy to coordinate schedules but he is behind her every step of the way, she says.

Along with her talent for cooking, Tam’s natural charm and amiability make it easy for her to teach, offering classes of various sizes for a wide audience including children, families and tourists, and centering around different themes. She also caters for company and individual events, at astonishingly reasonable rates.

Apart from the atelier, one of Tam’s projects includes a chronicle on Azur TV. But instead of waiting for Masterchef’s Sweetheart on television again, why not just go to her atelier and take a class – good eats and smiles guaranteed! 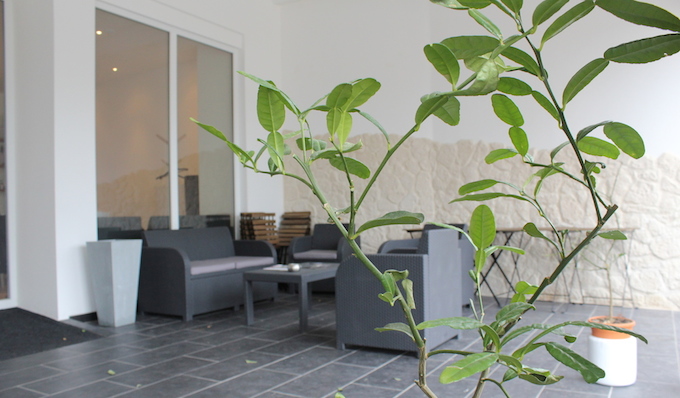