The Monte-Carlo Ballet pays tribute to the legendary Russian dancer Vaslav Nijinsky in the first performance of the season – but in the Company’s own special way.

The four ballets in the programme might bear (almost) the same titles as those either created for, or by, Nijinsky, but each has been re-imagined by the four featured choreographers – Monte-Carlo Ballet’s Jean-Christophe Maillot (Daphnis et Chloé), Marco Goecke (Le Spectre de la Rose), Jeroen Verbruggen (Aimai-je un rȇve?) and Johan Inger (Petrouchka).

For these performances, the Monte-Carlo Philharmonic Orchestra is led by Artistic Director Kazuki Yamada.

The original ballet Daphnis et Chloé was commissioned by Russian entrepreneur Sergei Diaghilev in 1909. Choreographed by Mikhail Fokine for Vaslav Nijinsky, it has a gorgeous score by Maurice Ravel, and is based on the Greek fable by the poet Longus, telling of the love story between a shepherd and shepherdess. Jean-Christophe Maillot’s version, created for the 2010 Celebration of the Centenary of the Ballets Russes in Monte-Carlo, and which premiered at the Grimaldi Forum on April 1st of that year, seeks to distance itself from the original story by focussing on emotions, and the ways in which the body responds to them through the gestures by which we’re attracted to one another.

Once again, this work highlights the long-standing professional relationship between Maillot and designer Ernest Pignon-Ernest who on this occasion takes on not only the role of stage designer, but of visual artist as well, his expressive drawings accentuating the curve of a shoulder, the turn of a neck or the flight of a hand. Costumes are by Jérôme Kaplan, lighting by Dominique Drillot, and videography is by Ernest Pignon-Ernest and Matthieu Stefani.

Mikhail Fokine’s original ballet Le Spectre de la Rose was first performed in Monte-Carlo in 1911, and created specifically as a vehicle to showcase the extraordinary talent of Vaslav Nijinsky. Set to Carl Maria von Weber’s Invitation to the Dance, it was inspired by a line of verse by Théophile Gautier – ‘I am the spirit of a rose you wore at the ball yesterday’ – and tells of a young girl who, having returned from a ball, falls asleep clutching the rose, and dreams of the spirit of the flower who leaps through her window and dances with her.

Marco Goecke’s interpretation was also created on commission – by Monte-Carlo Ballet, for the 2010 Centenary of the Ballets Russes, and it premiered on July 14th, 2009, at the Terrasses du Casino de Monte Carlo. Whilst still drawing on the original poem, this work is nevertheless a far cry from the romance of the Fokine ballet. Instead, Goecke focuses on the power and intensity of the male dancer, while the girl is portrayed as highly independent, with her own reserves of power. In addition, he has added the roles of six supporting spirits, and included in the score a second piece of music, The Master of the Spirits, also by von Weber.

Goecke created his first choreographic work in the year 2000, when he was dancing for Theatre Ballet Hagen. He choreographed a work, Mopey, for the New York City Ballet’s Diamond Project in 2002, which has since been performed at Jacob’s Pillow Festival, at the Biennale in Venice and at the 2004 Pina Bausch Festival in Wuppertal. In 2003 he won first prize at the Prix Dom Perignon choreographic competition in Hamburg with Blushing, and in 2006, while resident choreographer at Stuttgart Ballet, Goecke was the recipient of the Nijinsky Award for emerging choreographers, and had his first full-length ballet Nutcracker, premiered by the Company. Works which he has created for Monte-Carlo Ballet include Whiteout in 2008, and the following year a solo, Tué, for Bernice Coppieters, in honour of Princess Caroline of Monaco.

The scenography for Le Spectre de la Rose is by Marco Goecke, Nadja Kadel is the Artistic Advisor, costumes are by Michaela Springer and lighting by Udo Haberland.

Verbruggen is a former member of the Monte-Carlo Ballet, having danced with the Company for 10 years. His first creation for Monte-Carlo Ballet was Kill Bambi in 2012, followed by Arithmophobia in 2013 – for which he was nominated for the Rolex Arts Institute’s Mentor and Protégé project in 2015. He has also choreographed a number of ballets for the Princess Grace Academy in Monaco, and the Monaco Dance Forum. Other companies for which Jeroen Verbruggen has choreographed works include the National Dance Company of Wales, Ballet de Flandres, Ballet National de Marseilles, and the Staatsopernhaus Ballet in Nuremberg. His first full-length programme – his own take on The Nutcracker – was created for the Grand Théâtre in Geneva in 2014, and is still presented today in Europe.

Verbruggen is responsible for both the choreography and staging of Aimai-je un rȇve?, which is set to the same Debussy score as the original, costumes are by Charlie The Mindu, and lighting by Fabiana Piccioli. 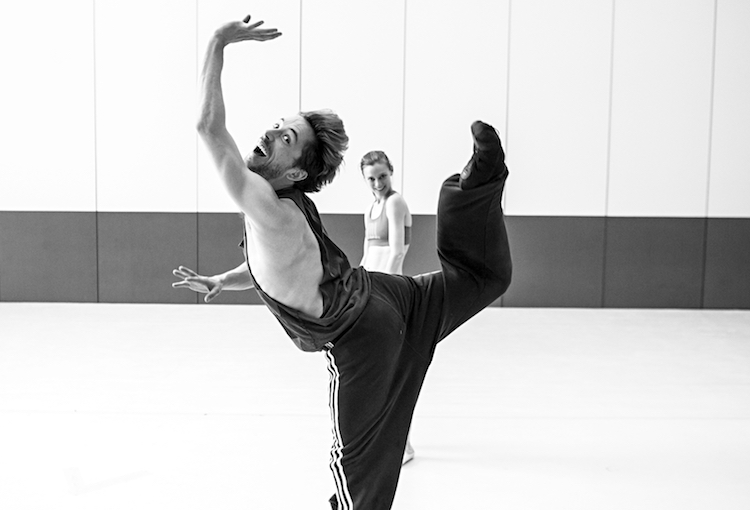 The final work on the programme also has its premiere performance on December 8th – Johan Inger’s interpretation of Petrouchka. The original work, a ballet burlesque, was the result of a close collaboration between Sergei Diaghilev and Igor Stravinsky – who created the libretto together with Alexandre Benois – and whose score is regarded as “brilliant, charming and absorbing, one of the most magical scores in all the classical literature” (AllMusic). Also written for Nijinsky by Mikhail Fokine, the original tells the tragic tale of the puppet Petrouchka who met his end at the Shrovetide Fair of St Petersburg.

In Inger’s ballet, Petrouchka is a doll who, in the hands of a magician, dances and leaps for her audience, who watch in amazement. The action is set against the current and controversial world of fashion and consumerism, where praise of young bodies is paramount.

A former soloist with Swedish National Ballet, Inger became fascinated by the works of Jiři Kylián, and joined Nederlands Dans Theater I, where Kylián was artistic and co-director. Inger created his first work, Mellantid, for Nederlands Dans Theater II in 1995. Mellantid was included in the Holland Dance Festival, won Inger the Philip Morris Finest Selection Award 1996 in the Contemporary Dance category, and in 2001 it was nominated for the Laurence Olivier Award in the Best New Dance Production category.

Inger has devoted himself entirely to choreography since 2008. Companies for which he has created works include the Göteborg Ballet in Sweden and the Basel Ballett in Switzerland, and he has choreographed a version of Carmen for the Compaňia Nacional de Danza in Madrid, and another full-evening programme based on Le Sacre du printemps for the Royal Swedish Ballet in Stockholm.

This production of Petrouchka is set to Stravinsky’s original score. The assistant choreographer is Christophe Dozzi, dramaturgy is by Gregor Acuña Pohl, costumes by Salvador Mateu Andujar, lighting is by Fabiana Piccioli, and scenography is by Curt Allen Wilmer with estudiodeDos. 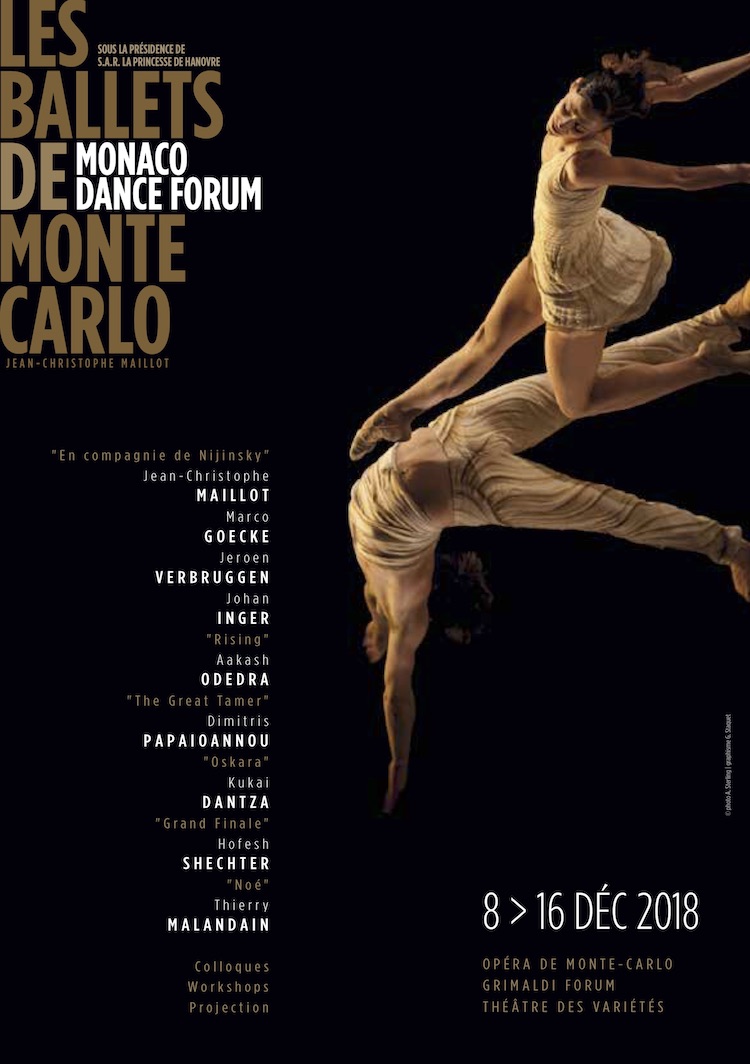 En compagnie de Nijinsky takes place at the Grimaldi Forum on the 8th and 9th December. Full details are available on the Monte-Carlo Ballet website.

Following this celebration of works in honour of Nijinsky, the Monte-Carlo Ballet presents a further four programmes – Rising by Aakash Odedra, and The Great Tamer by Dimitris Papaioannou, both at the Théâtre des Variétés; Oskara by Kukai Dantza at the Salle Garnier; Grand Finale by Hofesh Shechter and Noé by Thierry Malandrian at the Grimaldi Forum.