Josephine Baker: dancer, singer, actor, sex symbol, war spy, and civil rights fighter… wife to four husbands and mother of twelve adopted children… quite the bio. 46 years after the multi-faceted artist’s passing, her list of accomplishments just grew a little longer. She will be the first American-born Black woman to receive an honour tomb in the Panthéon. In August 2021, President Emmanuel Macron granted a petition initiated by writer Laurent Kupferman, carrying over 40,000 signatures and supported by many French artists and intellectuals.

“Aux grands hommes, la patrie reconnaissante” (“To the great men, from a grateful nation”). The French took the inscription on the façade of the Panthéon in the 5th arrondissement of Paris quite literally for the longest time. 73 illustrious men have been buried there, among them Voltaire, Victor Hugo, Emile Zola, Antoine de Saint-Exupéry, and Pierre Curie. But to date only five women enjoy the same honour, the best known among them Marie Curie and Simone Veil. Now Josephine Baker joins them.

Josephine Baker was born as Freda Josephine McDonald in the slums of St. Louis, Missouri, on June 3, 1906. She left her Midwestern hometown at age 15 to go to New York City and become part of the Harlem Renaissance. While her talent as a dancer was quickly spotted, her skin colour prevented her from making it big. At 19, she left for Paris, and quickly became a star at the Folies Bergères theatre. Her costume, consisting of only a short skirt of plastic bananas and a beaded necklace, became an iconic image and a symbol both of the Jazz Age and the Roaring Twenties.

In 1927, she became the first Black woman to star in a major motion picture, the silent film Siren of the Tropics. Her out-of-this world talent and her trademark combination of sweetness, sex appeal, and humour proved irresistible. Artists and intellectuals of the era venerated her and nicknamed her “Black Venus”, “Black Pearl”, “Bronze Venus”, and “Creole Goddess”. At just 21 years old, she was a world star. Anywhere but in segregated America…

She fell in love with France, and with a French industrialist. Upon her marriage with Jean Lion in 1937 – the third of her four husband after two short-lived teenage marriages – , she renounced her U.S. citizenship. Although she never had any surviving biological children she adopted and raised 12 children from all over the world, of different nationalities, religions, and race.

In September 1939, when France declared war on Germany, Josephine Baker was recruited by the French military intelligence agency as an “honorable correspondent” to clandestinely collect information about German troop locations from officials at embassies, ministries, and social gatherings, and to report back what she heard. She supported France all throughout the Second World War although she fell seriously ill several times after 1941. Her work as an agent though earned her several medals.

After the war, and with her pre-war celebrity status fully intact, she went back to performing and also started spending more time again in the USA. While more readily accepted than just 20 years earlier, segregation was still alive and kicking. On one occasion, the world-famous artist was refused to be served at a restaurant. Hollywood actress Grace Kelly witnessed the outrageous scene and rushed to her defense. The future Princess Grace Patricia of Monaco and the artist would become lifelong friends. 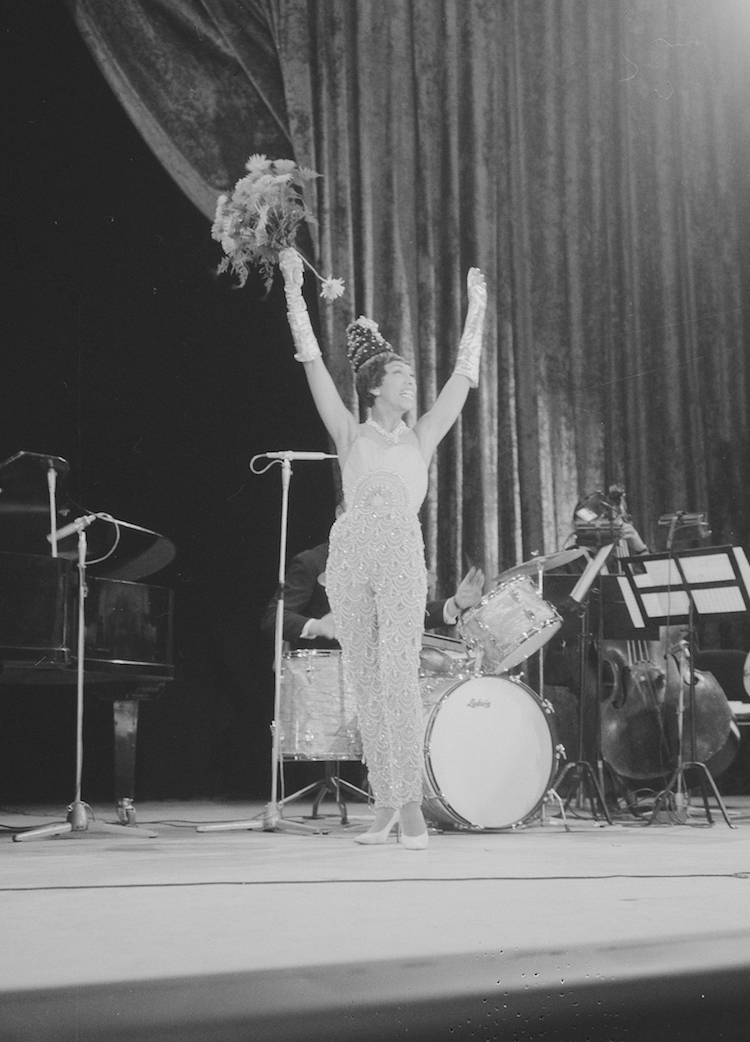 After her retirement from stage in 1956, Baker’s own experience as a “colored” woman in America led her to join the NAACP and become actively involved in the budding civil rights movement. She participated in the March on Washington DC alongside Dr. Martin Luther King Jr., she gave speeches, acknowledged Rosa Parks’ influential role, and famously said, “I have walked into the palaces of kings and queens and into the houses of presidents. And much more. But I could not walk into a hotel in America and get a cup of coffee, and that made me mad. And when I get mad, you know that I open my big mouth. And then look out, ’cause when Josephine opens her mouth, they hear it all over the world”. But when after MLK’s assassination his widow Coretta asked her to fill his place she declined, arguing that her “children were too young to lose their mother”. Instead, she toured politically charged areas of the world like Cuba and Yugoslavia to bring a ray of joy to those living under authoritarian regimes.

Meanwhile, her chosen home country had started to forget her. Here, she was no longer a sought-after star although she still occasionally performed at the world’s grand concert halls like Carnegie Hall. But her health was declining, and with that came financial hardships. Her friend Brigitte Bardot would help her out financially, her other good friend Princess Gracia Patricia offered her an apartment in Roquebrune, near Monaco, where she would live out the rest of her years.

On April 8, 1975, the 68 year old performed one last time in Paris to glowing reviews. But only days later, she suffered a cerebral hemorrhage, slipped in a coma, and passed in the early morning hours of April 12, 1975. She is interred at the Cimétière de Monaco.

Whether or not Josephine Baker’s remains will actually be exhumed and transferred to the Panthéon from Monaco is unclear. President Macron announced that that was going to be the case while family spokesman Jean-Claude Bouillon-Baker informed the media that there were no such plans but instead a cenotaph (an empty tomb with a plaque) would be erected to mark his mother’s place in the Temple of the French Nation.

Wherever Miss Baker’s mortal body will finally rest, she has an eternal place in all the many hearts and lives she touched. On stage, she was a star. But to many she was the sun, brightening the lives of so many with her warmth and humanity.

“Surely the day will come when color means nothing more than the skin tone, when religion is seen uniquely as a way to speak one’s soul, when birth places have the weight of a throw of the dice and all men are born free, when understanding breeds love and brotherhood.”