The exhibition ‘Alberto Magnelli – La Méditerranée retrouvée‘ is the perfect occasion to discover, or rediscover, the works of a prolific artist, considered by many as the first Italian abstract painter.

An autodidact; Magnelli was a major figure of the concrete art movement that was popular during the 30’s and 40’s thanks to the influence of the Futurists in Florence and his contact with the Parisian avant-garde. 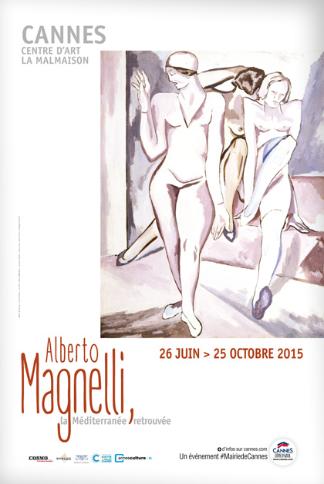 While the painter settled permanently in France in the early 30’s where he befriended Pablo Picasso, Fernand Léger, Guillaume Apollinaire, Juan Gris and Max Jacob, he always remained somewhat loyal to his native roots and the masters of the Trecento and Quattrocento, which explains why his overall approach to form was more romantic than analytical.

Inspired by multiple artistic approaches throughout his life (Fauvism, cubism,…), the “pittore Fiorentino” (the Florentine painter) as he defined himself, created colourful and poetic artworks that are invariably harmonious, despite shifting from heavily outlined shapes at the outset to geometric abstraction later on.

When the Nazis invaded France in 1940, Magnelli moved to Grasse, managing to complete many works during his stay. He moved back to the French capital after the war and started traveling extensively around the world to show his paintings. He won second place at the Sao Paulo Biennial in 1951 and held a big exhibition at the New York’s Museum of Modern Art. Magnelli died in his house in Meudon, just outside of Paris in 1971, at the age of 82.

While the Magnelli Museum in Vallauris is home to the largest collection of works by the artist, this temporary exhibit in Cannes will be displaying nearly 200 paintings and drawings that are part of the collection held by the Gallerie Sapone in Nice.