With Alice, Nice’s premier theater company Collectif 8 created another play for which there are not enough words of praise in the dictionary.

When Collectif 8 and Lewis Carroll meet, wondrous things happen. True to their signature style, diffusing the boundaries between theater and cinema, writer and actress Gaële Boghossian and director Paulo Correia give life to Alice, the timeless heroine of Alice in Wonderland who in this adaptation of the sequel, Through the Looking Glass, takes on the persona of a seven year girl embarking on a journey of self-discovery, facing several crossroads, to eventually arrive on the throne of the Red Queen.

“I knew who I was this morning, but I’ve changed a few times since then.” Alice’s statement is strangely and beautifully symbolic for the play. It starts out as theater…. but is it? Or maybe it’s cinema….??? Is it classic…..modern….a game of chess, an obstacle course, a trip back and forth between dream and reality, between reason and feelings…..? “Don’t even try to understand the play, just allow yourself to be carried by your emotions – only then it will make sense. In the end, everything falls into place,” is how Paulo introduces the play. 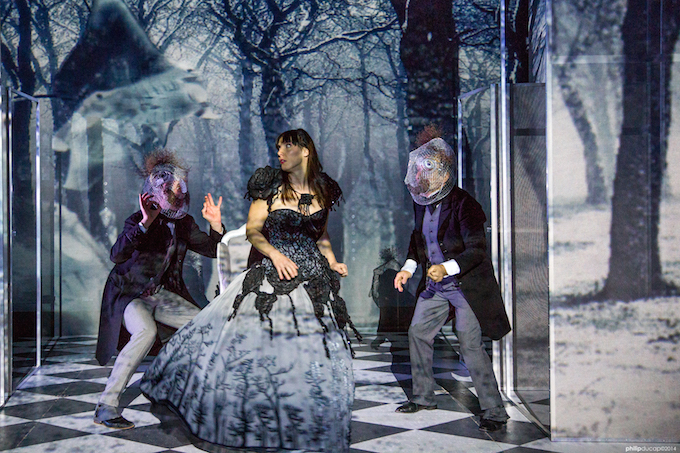 And his advice is well worth being listened to as scene after scene unfolds, with only three actors telling a rich fabric of allegories, fantasy, and the distortion of time and dimensions. All three actors’ performances are engaging, betraying classical training from the ground up. The sublime Gaële Boghossian lends the girl Alice a touching, ethereal, fairylike, playful quality, and confident, poised womanhood as she grows up. Perfectly complemented by Paul Chariéras and Clément Althaus who also signs responsible for the live music, the trio is a fast-paced, physical, cohesive tour de force on stage slipping in a multitude of roles from the neurologist to the Cheshire Cat. Beautiful costumes, carrying Gaële’s own signature, and fantastical masks, designed by Vanessa Clément and Thierry Hett, round out the imagery.

But what truly catapults the play to a stratosphere well outside the realm of current productions is the incredibly effective use of audiovisual elements – Collectif 8’s hallmark. A stylishly dark and understated scenography, with sparse décor that is as modern as it is retro. Paulo Correia masters the hybrid of stage theater and videography like no other. He knows how to set moods, tell stories, transcend space, and create richness and depth out of nothing but brilliantly applied light, shadows, and multimedia effects. The play is in French, and in order to truly savor Gaële Boghossian’s adaptation and her fine, poetic sense of literature, it would be ideal to know the language but even without linguistic skills, Alice can be understood simply on the strength of its visual storytelling and the emotions it evokes. 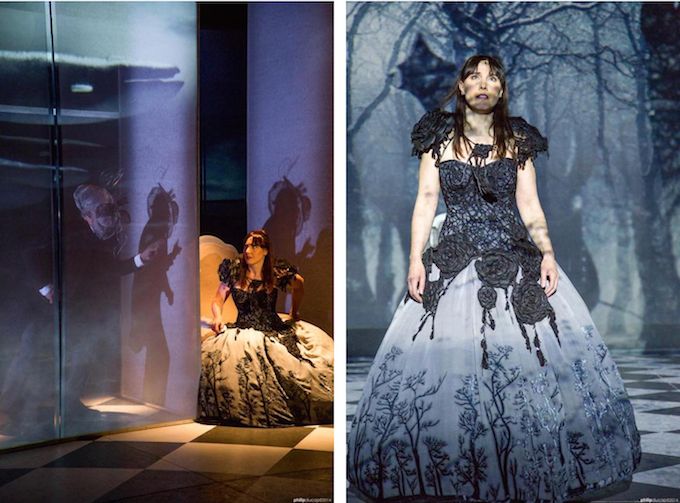 After almost 10 years at the Théâtre National de Nice, Collectif 8 moved on to new ventures at the end of the 2013/14 season, coinciding with Daniel Benoin’s departure who after three successful terms handed over leadership to Irina Brook. Unforgotten Collectif 8’s impact on Nice, culminating in January 2014 in the amazing production of Victor Hugo’s play Angelo, Tyran de Padoue with an extraordinary Marc Duret in the title role, and Gaële Boghossian as La Tisbé. Collectif 8 has since become an itinerant company and has been on tour for the past several months, collecting accolades and standing ovations at festivals and theaters across France. They also have a packed agenda for the coming months which takes them all over the Héxagone. On the playbill, other than Alice: Double Assassinat Dans La Rue Morge by Edgar Allen Poe, and L’homme Qui Rit by Victor Hugo.

For all their travels, Nice is Collectif 8’s home, and they still perform here at great regional houses like the Théâtre Francis Gag in Nice (rendezvous there with L’Homme Qui Rit on April 18, 2015!) or, as right now, the Anthéa. Daniel Benoin, the former TNN director and now at the helm of the Anthéa, supports several local theater companies and has offered Collectif 8 the opportunity to co-produce Alice. Theirs is a long-standing professional and personal friendship: Gaële and her artistic twin flame Paulo Correia studied under Daniel at his renowned École de la Comédie de St. Etienne, and it was their great teacher who early on recognized their complementary creative genius, invited them to join him when he went to Nice in 2001 to head the TNN, and helped them to develop into one of the most professional and progressive French companies. 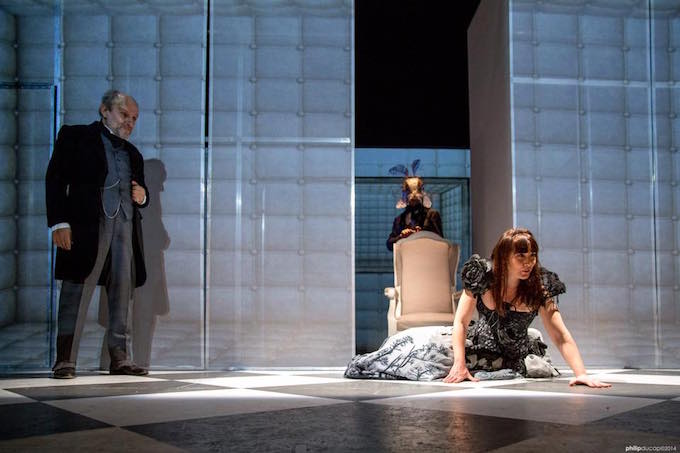 Alice is one of those truly magical, unforgettable theater events, one that leaves its imprint on the hearts and minds of visitors. And… yes – Paulo was right. Everything does fall into place, if you only let it happen.

Alice runs at Anthéa until Sunday, 21st December. Tickets cost from €16 and may be reserved online.