After wowing Nice, Irina Brook’s rock & roll version of Ibsen’s Peer Gynt is making cool Londoners swoon before it’s back at the TNN next week.

Ever since the 2014/15 theatrical season started, Nice has been buzzing with this year’s defining event: Peer Gynt, the first play at the Théâtre National de Nice under Irina Brook’s direction. And it has been a triumph. After charming critics and the public with her poetic, dreamy, and yet thoroughly dynamic, contemporary interpretation of Henrik Ibsen’s classic, she is currently on a pit stop in London, presenting the play at the Barbican before returning with it to the TNN from 16th to 18th October.

Beneath her tremendously charming, likeable, and seemingly unfazed personality there is a fierce fighting spirit with a clear artistic vision and high ambitions – a force to be reckoned with. Her mission is to prove that she is way more than just “Peter Brook’s daughter” – her mission is to bring people together, wherever they are, to enjoy great quality theatre productions without an elitist attitude. And in her quest to attain that goal, she happily mixes genres, cultures, and languages. A Norwegian saga about a hero who is actually a loser… played in English…..in France? That’s not even a challenge to Irina, that’s simply how she perceives her art, and what she wants to share. “Come on, you who have never set foot into the TNN before, and see for yourself. See what happens if Iggy Pop composes songs for a play, and Sam Shepard writes poems for it!” is her invitation to the public. 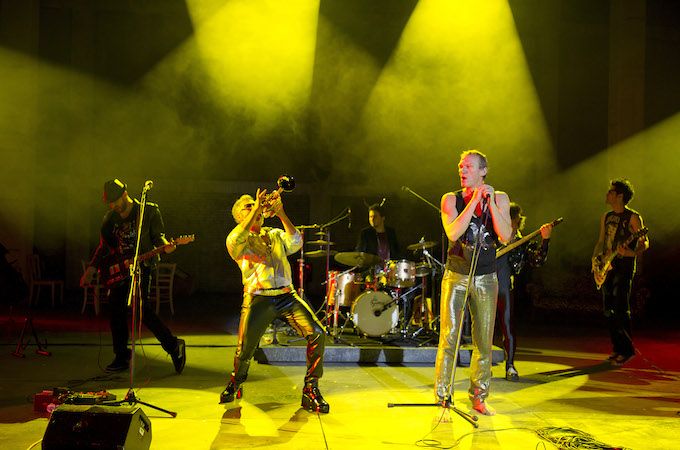 The response in Nice during the week of Peer Gynt’s premiere was extraordinary. People trekked up the inhospitable flight of stairs to the National Theater, drawn in by the promise of an approachable play which was fun rather than highbrow. And Irina and her company kept that promise. The “Nordic Faust”, which would normally hold little appeal to the broad masses, was transformed into a stunning rock ‘n roll spectacle which instantly captured hearts and minds. The music ranges from Iggy Pop’s rock to Norwegian folk songs and Edvard Grieg’s opus 23, especially written for Peer Gynt, all played live on stage by the multidisciplinary cast. And Sam Shepard’s twelve poems add yet another introspective dimension to Peer’s struggle to find himself. 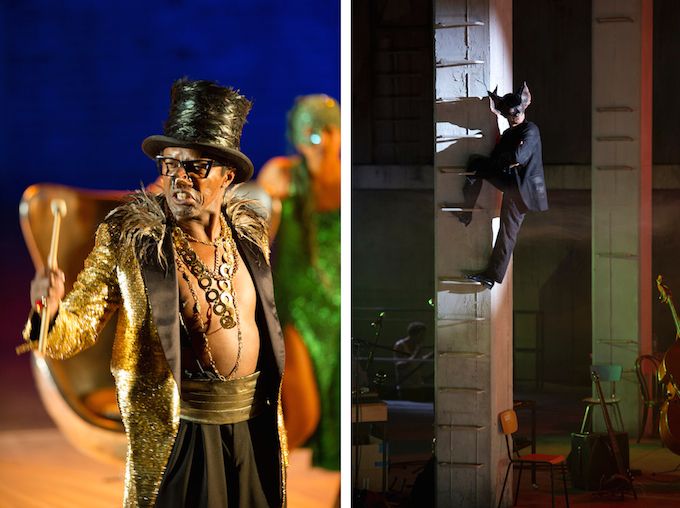 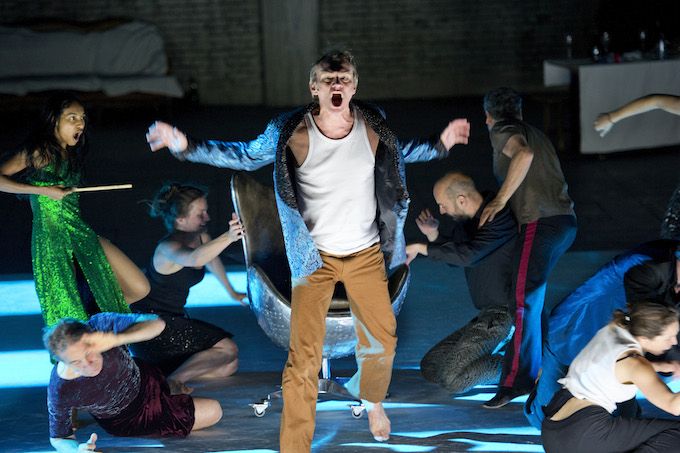 The eclectic, multicultural cast of 15 actors, musicians and dancers, representing every continent, are playing in English, pouring their heart blood into it. You will find well-known names such as internationally renowned Icelandic actor Ingvar Sigurðsson (pictured above) in the role of Peer Gynt or sublime Lebanese-French Mireille Maalouf as his long-suffering mother, but also dazzling singing talent like Frøydis Arntzen-Dale or Augustin Ruhabura, the perfect incarnation of the Troll King…. to name but a few in a cast of which everyone, without exception, merits a special mention.

The harmonious, elegant, and at the same time dynamic choreography is the creation of Pascale Chevroton who has worked for major international productions and Houses for many years. And the outstanding tech team around Jean-Luc Tourné, Guillaume Pomares, Philippe Jasko and Alexandre Toscani works its magic to translate Irina Brook’s adaptation into dazzling, stunning visual and sound effects…. accompanying the actors’ exquisite performances by taking you on a journey through Norway’s icy night, the trolls’ underground kingdom, or a downtown New York music club, all without a single change of decor… just a few simple props here and there. 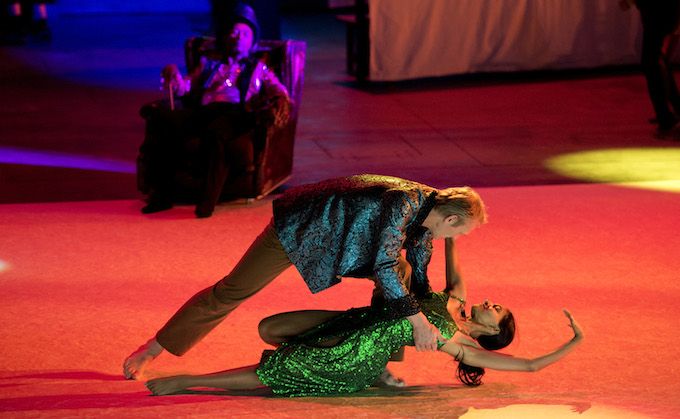 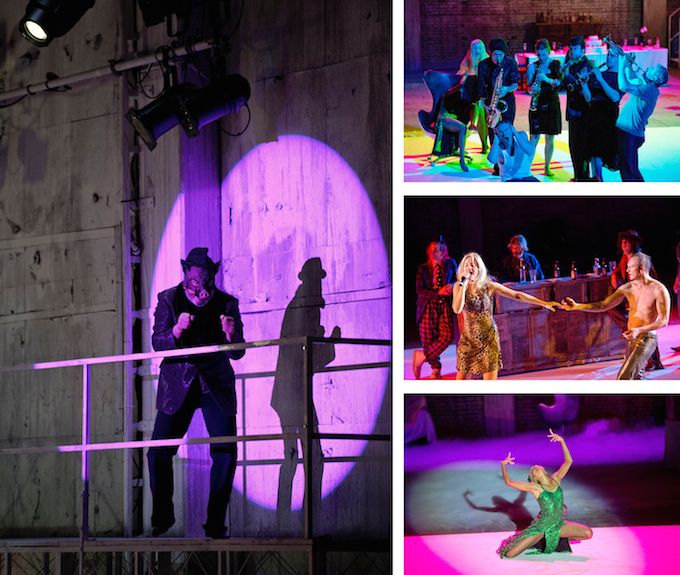 But while you may argue that it was still relatively easy to persuade curious locals in Nice, a venerable cultural institution such as the London Barbican is quite another matter. Well, yes indeed. The TNN is a lovely, well-funded, and sophisticated theater but the Barbican is still a notch up from that, and that includes the audience’s and the media’s expectations. To make the Barbican-going crowd swoon, you better pull something great out of your hat. And with Peer Gynt, Irina did just that. From October 8-11, her company came, played, and conquered with unforgettable performances, all actors on a roll. Remember that Iggy Pop wrote parts of the music for this play? Well, he, too, couldn’t resist the temptation to watch the show, and attended the London premiere, even making a brief appearance on stage bowing with Irina, his longtime friend from a 1980s New York. And that era in Irina’s life when she lived in the Big Apple as a Stella Adler dramatic arts student must have left its traces on her and influenced her in her artistic direction because Peer Gynt is a show well worthy of Broadway.

How lucky is Nice that this play, which on four nights has taken the Barbican by storm, will come back to the TNN from October 16-18? How lucky is Nice to have a new director whose vision is to impart a multicultural flavour, to fling the TNN’s doors wide open to everyone, without sacrificing quality? See for yourself – don’t go…. RUN to see Peer Gynt while it’s still on. There are few tickets left, so do be sure to grab some before they are all gone. See Peer Gynt for yourself, fall under Irina Brook’s spell, and come out a converted, lifelong theatre lover. 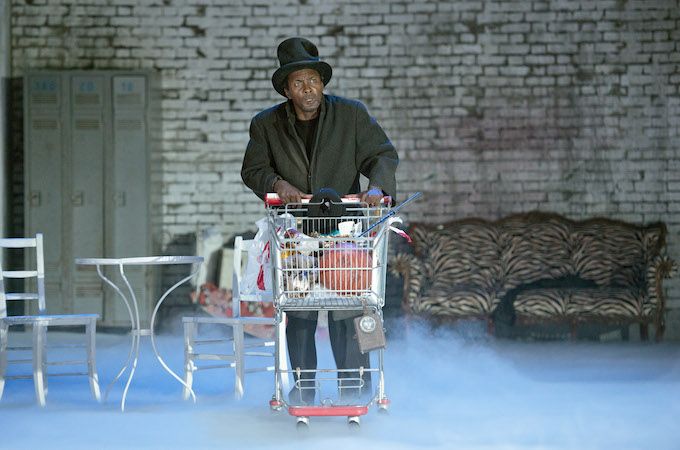