The operatic event of the year takes place in Nice this Spring when the story of Alfred Dreyfus is brought to life on stage at the Opera House.

Although the cast has yet to be confirmed, two big names are front and centre with this upcoming production: famed musician Michel Legrand (the ‘Umbrellas of Cherbourg’ and the ‘Thomas Crown Affair’) who composed the music, and local author Didier Van Cauwelaert who wrote the libretto, adding to the excitement of this world première!

With all its twists and turns, the serious threat that it posed to the French Republic itself, and the political implications that it had for the country, this real-life story has, without doubt, all the makings of a great drama.

It all started in late 1894 when Captain Alfred Dreyfus, a French officer of Alsatian Jewish descent, was sentenced to life imprisonment on Devil’s Island in French Guiana for selling military secrets to Germany.

Despite evidence showing that he had actually been framed by high-ranking military officials to protect the real culprit, Charles Marie Ferdinand Walsin Esterhazy, Dreyfus was retried in 1899 and once again found guilty.

Even though the new President of the Republic, Émile Loubet, almost immediately pardoned him, it would take another seven years before the officer was reinstated and awarded the Legion of Honour, and nearly a century before the French army publicly recognized – in 1995 – that he was indeed innocent.

Dreyfus may be considered a national hero in France today, but the scandal that surrounded his affair literally tore the country apart for many years, pitting the Dreyfussards – mostly secularists and staunch supporters of republican governments – against the anti-Dreyfussards – mostly Catholics, monarchists and conservatives – and lead to widespread anti-militarism, anti-clericalism and anti-Semitism, as well as to the creation of the Human Rights League. 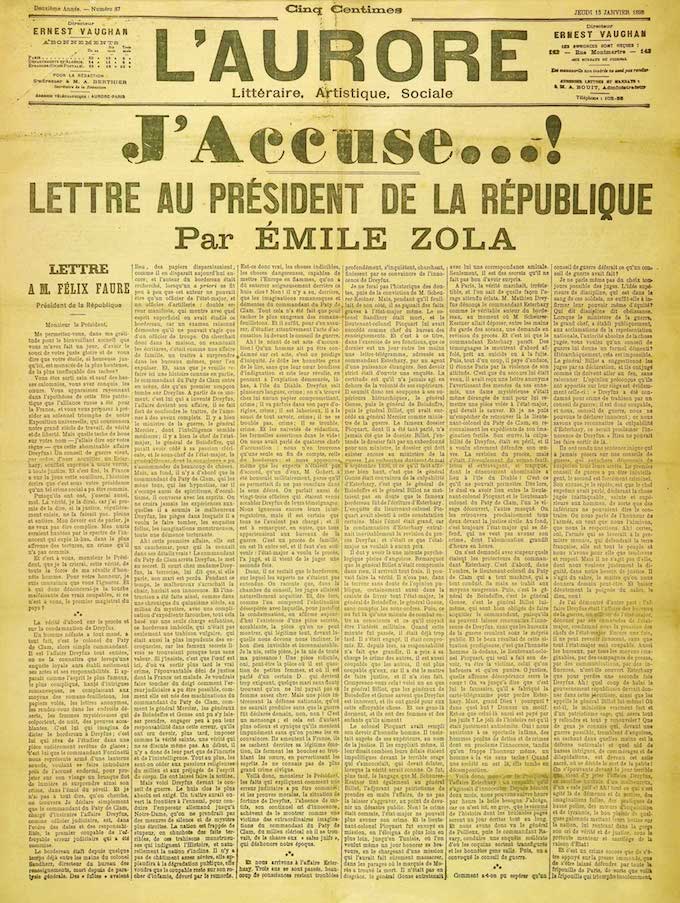 The affair probably reached its climax in 1898 when Émile Zola wrote what has become the most famous editorial piece in the history of journalism, “J’accuse” (see above – click for larger image). In this incendiary open letter to the then President of the Republic, Félix Faure, published in the newspaper ‘L’Aurore‘, the acclaimed author of the Rouquon-Macquart series took the defense of the wrongly accused officer by publicly naming all those who conspired against Dreyfus, including the Minister of War, and was himself put on trial for libel.

DREYFUS, a world premiere presented by the Théatre National de Nice with the choir and philharmonic orchestra of the Nice Opéra. Music by Michel Legrand and libretto by Didier Van Cauwelaert; directed by Daniel Benoin; settings by Jean-Pierre Laporte; costumes by Nathalie Bérard-Benoin; lighting by Daniel Benoin and video by Paulo Correia.

The performances run from the 16th of May to the 6th of June and tickets, costing from €8 to €40 may be reserved online.

Images of ‘J’accuse’ via Wikipedia