“Immersion”, the Monegasque museum’s new multimedia show, takes visitors on a stunning virtual visit to one of the Seven Natural Wonders

After a spring filled with public health concerns and financial worries, Monaco’s Oceanographic Museum has recently finally reopened its doors to the public, and just in time for the planned highlight of its year dedicated to corals: Titled “Immersion”, a new spectacular 3D multimedia show plunges visitors into the depths of Australia’s majestic Great Barrier Reef and takes them on a visit of a fully reconstituted underwater living environment that evolves with each step they take. Gliding alongside humpback whales, carpet sharks, barracudas or fluorescent corals, they become one with their mysterious habitat as it unfolds before their eyes.

“You’re about to immerse into a different world.” The welcome message at the entrance to the great Whale Hall captures it all. Seen through the eyes of a diver, “Immersion” tells the story of a reef during a cycle of day and night in a 30 minute time lapse. The daytime experience is centered on a realistic diving sensation, magnified by a striking décor teeming with life: fish come out of their hiding places, small wrasse fish groom the mighty blackspotted moray eel, while a group of juvenile barracudas watch as green parrot fish fight each other. The night phase watches discretely as eggs are laid, the phenomenon of certain corals’ bioluminescence or the glittering micro plankton comes to life, and the great predators go hunting.

Through the use of state-of-the-art technology and real-time projection, “Immersion” replicates an unterwater environment which is highly realistic and naturalistic in its rendering. Species modeled from real images and movements and interactions recreated from behaviours observed in the natural environment offer a realistic diving experience. The show, which runs through the end of 2021, is complemented by a tour of the entire museum site, from the aquarium to the heritage rooms, and the sea turtle basin.

Behind the magic of “Immersion” is an internationally renowned group of multimedia designers: Dreamed By Us is a company specialising in large scale interactive scenography founded in 2018 by Olivier Ferracci and Nora Matthey de l’Endroit. And renowned artist and multimedia engineer Emmanuel Mâa Berriet signs responsible for the creative execution with the revolutionary AAASeed mapping and rendering software he developed almost 25 years ago and has continually perfected since. The three collaborated closely with the Oceanographic Museum and its partners, as well as divers and biologists, to produce an experience which is entertaining and engaging for adults and children alike, and intended to create a link between Man and an endangered eco-system which is usually inaccessible to humans. 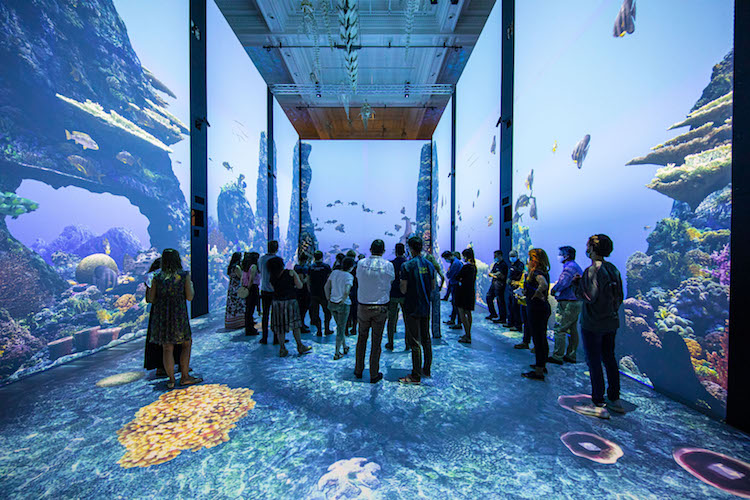 Educating and creating awareness for the pressing needs of the world’s oceans is one of the oceanographic Museum’s primary goals. The marine world is in great danger through pollution, rising temperatures, overfishing, and many other manmade and natural threats, and fragile corals are especially at risk. Although coral reefs cover only 0.2% of the world’s oceans, they house 30% of marine biodiversity. “Due to their importance in global ecosystem, corals must, more than ever before, be at the heart of our strategies,” said H.S.H. Prince Albert II of Monaco, Honorary President of the Institute of Oceanography.

Corals may be tiny creatures but they are great engineers: With more than 2,300 km in length and covering a surface of 348,000 km², Australia’s Great Barrier Reef is the planet’s largest animal-built construction. The reefs they build are home to countless species of underwater flora and fauna. The Great Barrier Reef has been classified a world heritage site in 1981 and counts as one of the Seven Natural Wonders of the World.

Monaco has been at the forefront of the protection of the Ocean for decades. Since 2018, it has co-chaired the International Coral Reef Initiative, an informal partnership between states and organizations aiming at preserving coral reefs and related ecosystems (mangroves and seagrass beds) all over the world.

Like all cultural institutions, the Oceanographic Museum is dependent on ticket sales to finance its operations, and suffered greatly from the forced shutdown earlier this year related to the pandemic. In order to maintain its educational mission and scientific ambitions, director Robert Calcagno and his team greatly appreciate your patronage, be it as a visitor, a regular sponsor, or a one-time donor.

All images courtesy and © Musée Océanographique