Dubbed the “master of light” by Claude Monet himself, Joaquín Sorolla y Bastida was once one of the most successful artists of the early 20th century, before falling into relative obscurity outside of his native country

However, his name should be back on everybody’s lips this summer, thanks to the exhibition currently running at the Hôtel de Caumont in Aix-en-Provence.

At a time when traveling abroad is for most of us just a pipe dream, “Joaquín Sorolla, Spanish Lights” provides a great opportunity to escape to the warmth of Spain through the artist’s iridescent canvases. After all, as French critic Henri Rochefort observed at the time: “I do not know any brush that contains as much sun”.

Born in Valencia in 1863, Sorolla was brought up by an aunt and uncle after the early death of his parents from cholera. He studied art in his hometown, and then in Madrid, Rome and Paris before working as an assistant to a local photographer whose daughter, Chlotilde, became his wife and muse. The painter’s first striking success was achieved with “Another Marguerite” (1892), which was awarded a gold medal at the National Exhibition in Madrid, then first prize at the Chicago International Exhibition. That was the beginning of a long stretch of public recognition in major European artistic competitions, such as the Salon de Paris and the Secession exhibitions in Munich, Vienna, and Berlin. 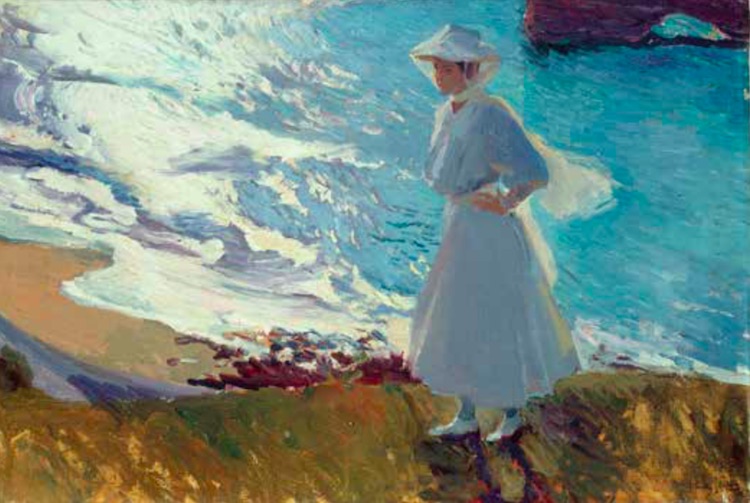 Sorolla cultivated artistic affinities with the greatest painters of his generation, such as Sargent, Zorn, Degas or Monet, and his career was marked by many solo exhibitions in major European and North American cities.

If his key influence from an early age was the great Spanish painter Velásquez, Sorolla remains particularly well regarded today for his loose and spontaneous brushstrokes, similar to Impressionism, and his technically accomplished treatment of water and light. And while Sorolla became mostly famous for his beach scenes marked by sharp contrasts of light and shade as well as for his vivid landscapes and portraits (the mountains of the Sierra Nevada, the Alcazar in winter, Burgos Cathedral in the snow), he also used his works to address social concerns through genre scenes of Spanish life (the exploitation of workers, the effects of disease, and such like)

The exhibition at the Hôtel de Caumont Art Centre focuses on three important elements: the artist’s creative process, the sources of the main themes in his work, and the way in which these themes evolved in his work. Alongside ambitious large-format works are small drawings and sketches in oils, as well as the artist’s copious correspondence and several photographs of himself and his entourage.

‘Joaquín Sorolla, Spanish Lights’ runs until the 1st of Novembre The Hôtel de Caumont is open every day. Tickets range in cost from €10 (7-25 years old) to €14,5 (full rate), while entrance is free for children under the age of 7. Opening hours are 10am to 7pm from May to September and 10am to 6pm from October to April.