October has arrived and with it, a sea of pink ribbons and other merchandise has started popping up on social media and in stores to remind women of the importance of mammograms for the early detection of breast cancer.

To help celebrate this National Breast Cancer Awareness Month, the Principality of Monaco will once again join forces with more than 200 cities in 40 countries the world over this Thursday when at nightfall and at the instigation of Pink Ribbon Monaco, the Prince’s Palace, the Monte-Carlo Casino, the Hôtel Metropole Monte-Carlo, the Yacht Club,and the Conseil National will be illuminated in pink light. A beautiful visual message of hope for those going through this terrible disease and a strong kick-off to an annual worldwide campaign that was created in 1985 as a collaborative effort between the American Academy of Family Physicians, AstraZeneca Healthcare Foundation, CancerCare, Inc., and a variety of other sponsors, to raise awareness and gain funding for research for a cure. 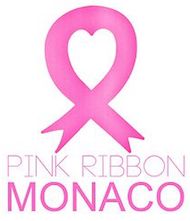 There are about 1.38 million new cases and 458,000 deaths from breast cancer each year around the globe. The disease is by far the most common cancer in women worldwide, both in the developed and developing countries, and since there is still no sufficient knowledge today on the causes of breast cancer, its early detection remains vital.

This early detection is one of the main goals Pink Ribbon Monaco focuses on. Founded in the Spring 2011, the independent charity regularly organizes various fun events (charity walk, poker tournament, introduction to paddle board…) throughout the Principality and in the nearby cities, and under the guidance of the Centre Hospitalier Princesse Grace, it is educating people on the necessity to create an environment where women who have found a lump in their breast do not have to wait too long to have a biopsy or receive treatment.