Quite by accident, English surrealist artist Richard Saunders has created an internet phenomenon for lovers of cats and photography alike

Have you seen them, these photos that have popped up everywhere on the internet lately – stately topiaries depicting felines in various poses… some peacefully asleep, others sitting up, ears pricked attentively… some busily chatting with friends, others gazing into space…? But while the world knows that the English are the greatest landscapers under the sun, and lovably eccentric to boot, they have not yet taken to actually trim their hedges into a realistic cat shape. Rather, a surrealist artist is at the root of this viral hit. Richard Saunders, a Hertfordshire, England based painter and photographer, originally only meant to pay homage to his beloved Russian Blue cat Tolly. And wound up making him an overnight internet star…

The very first surrealist image of The Topiary Cat was based upon a photograph Richard had taken of the stately grounds of Hall Barn, Beaconsfield. No cat figured in it but the way the photo turned out, the landscaping in the shape of a huge abstract “cloud” reminded the artist of Tolly. He realized that it would not be impossible to photograph his beloved cat in an appropriate pose and lighting that he could comp in via PhotoShop. Someone spotted the image, cropped out Richard’s name, and claimed it as ‘real’ on Facebook, garnering thousands of Likes. And voilà, The Topiary Cat was born.

The overnight hit took the artist by surprise, and now, eight years later, Tolly and his human dad have found worldwide fame. Due to overwhelming demand, Richard has since created a collection of some 60 works since, presented on The Topiary Cat website and Facebook page. “The reaction from my fans, especially the ones who buy totally into the concept and respond in a similar vein, is most heart-warming”, he says. It is not unusual for his photos to garner three million views.

The feline star in Richard’s work has an otherworldly realness; he looks so soft, so gentle, you just want to reach out and stroke his silky fur. Although most viewers would spontaneously put Richard’s œuvres in the vicinity of René Magritte, the artist begs to differ. “Surrealism became my obsession when I was still a teenager. Dali at first of course, but as I became more knowledgeable all the others, Magritte included, influenced me. I try to be individual and don’t really relate particularly to other surrealists. My works, both in oils, and for The Topiary Cat, have a peculiarly English quality that relate more to illustrators such as Arthur Rackham, I would think.” 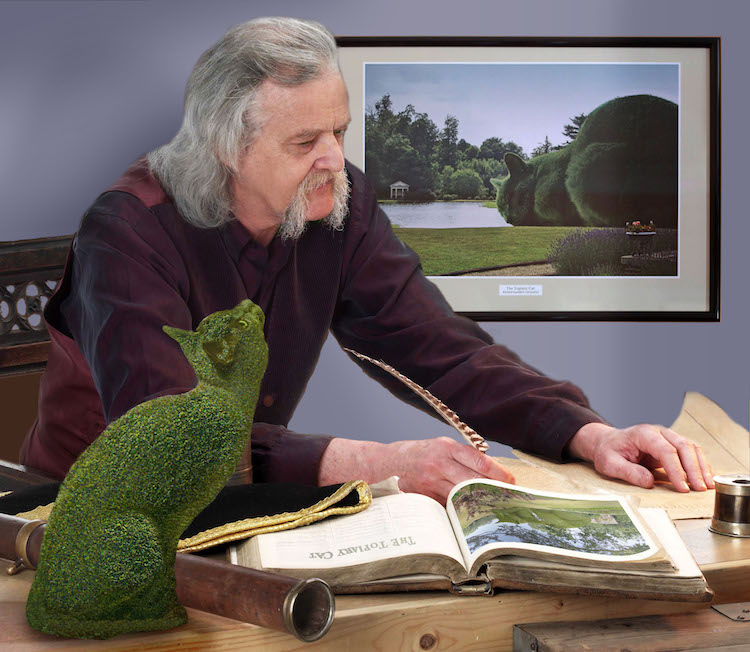 Born in 1946 into an art loving and creating family, Richard Saunders was haunted by surreal dreams as a child, though he knew nothing of the surrealist movement yet of course. When he discovered surrealism in his teenage years, it became a lifelong obsession. Mere skill, design and colour were never enough. There had to be some other element. Imagination. Creativity. Surrealism!

“I painted too slowly to make a living from surrealism, so turned to advertising to keep my family fed. I worked my way up to Creative Director, and became a partner in a small agency. Now retired, I can return to my first love, surrealist painting, and as a keen photographer, create surreal montages, too,” he says.

All his work is done in Photoshop CS5. His library of photos of topiary spheres, cones, columns, and the like is used to overlay real vegetation onto the surface of The Topiary Cat. Sometimes all the elements fall into place readily, in other instances it can be a struggle to realize his initial concept. “Being retired from working in a very pressurized industry, as an advertising creative director, I enjoy working with The Topiary Cat only when the mood takes me. I do it purely for the pleasure it affords me, and Tolly’s followers. I like to see it as my antidote to the gloom and unpleasantness that abounds in the world today.” 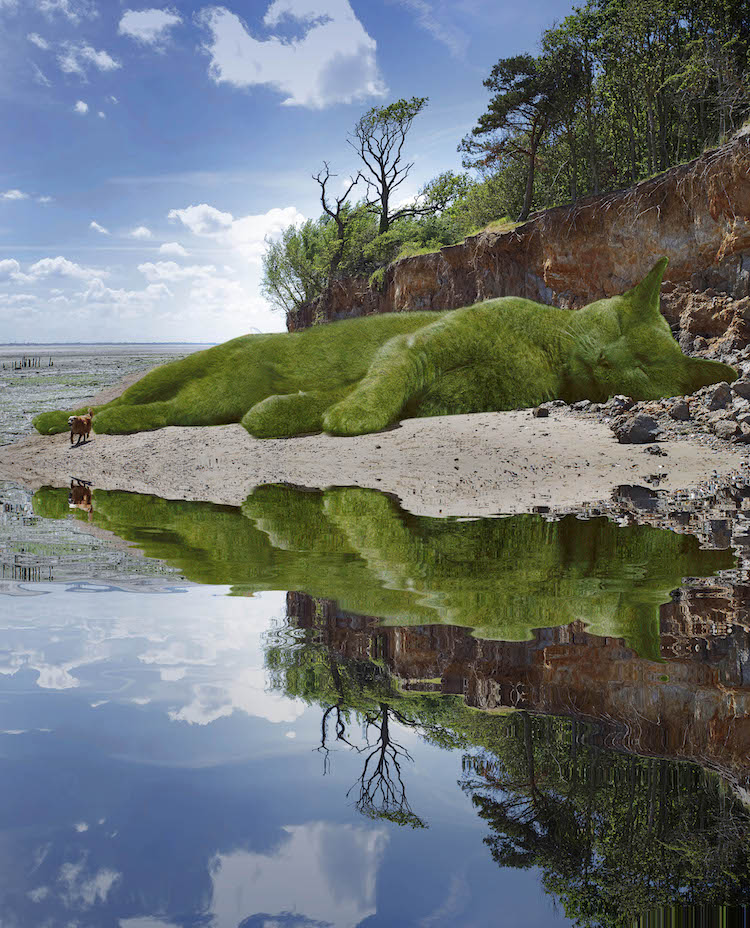 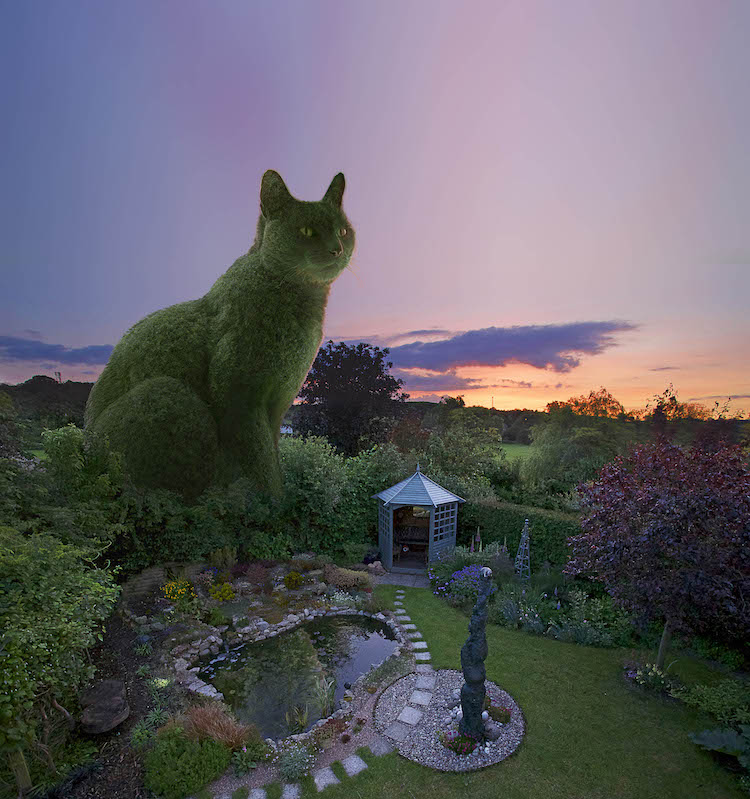 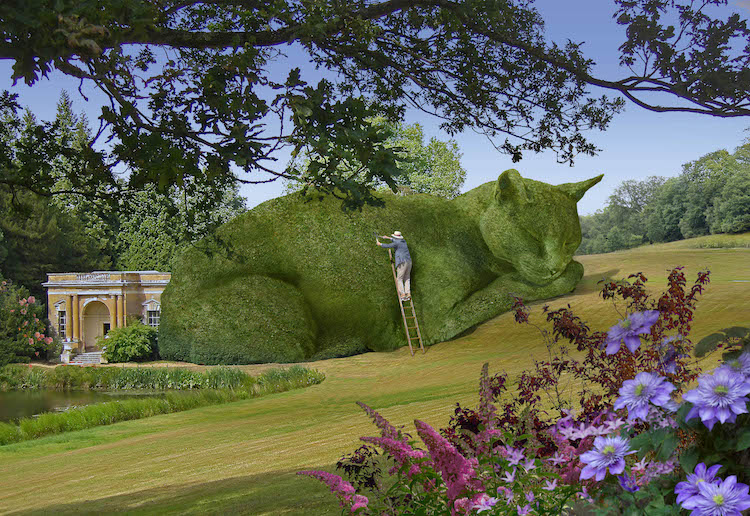 Tolly, the splendid Russian Blue and original protagonist, has sadly departed this world since. This has caused Richard, now over seventy, to become only too aware of his own mortality. He grieved for him for two years, unable to fill the void his legendary feline friend left. But earlier this year he finally felt ready to give home to another gorgeous Russian Blue, named Georgi. This new and no-less-beloved kitten has already featured in some of his creations, interacting with the original Topiary Cat, as another topiary alter ego. And in some way Richard had always known that once another cat comes along, he would probably weave this new character into the narrative somehow. “I have plans for books, both of poems with illustrations, and a longer adult fairy tale format. The Topiary Cat is supposed to be immortal, unlike myself!” 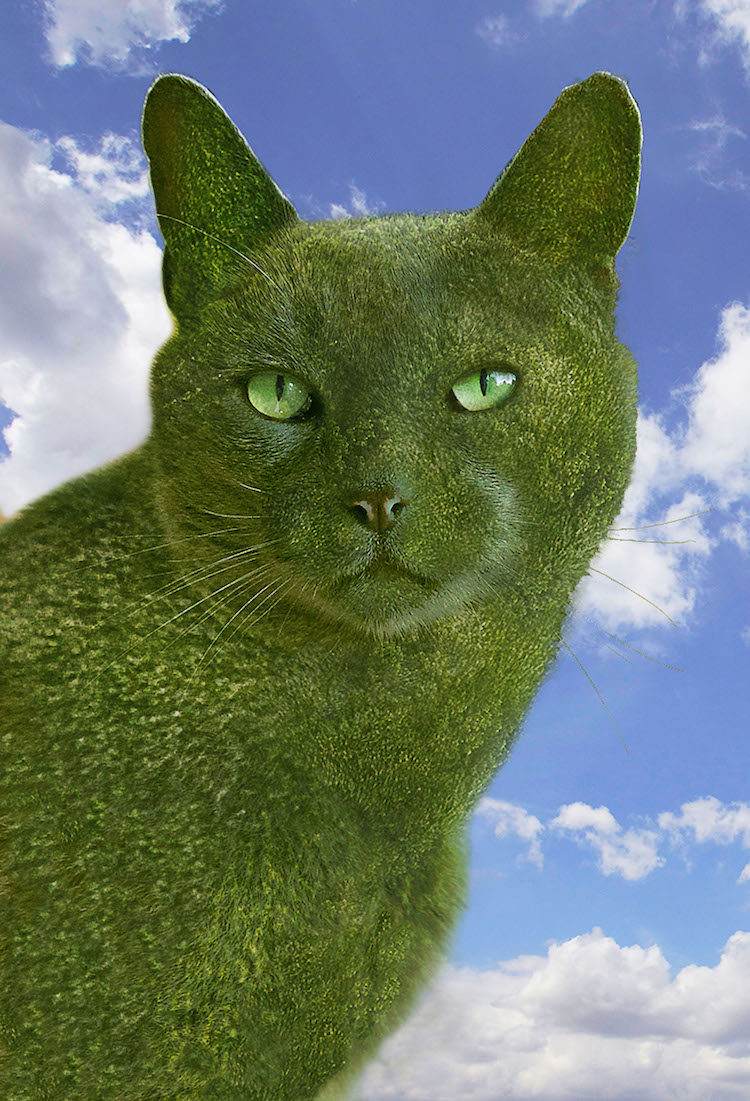 The Topiary Cat merchandise, including cards, posters and calendars, may be purchased online.