After Fabio Fognini’s 2019 surprise victory at the prestigious tennis tournament, will Rafael Nadal take his title back this year?

Due to the spread and threat of the Covid-19 pandemic, the 2020 edition of the Rolex Monte-Carlo Masters has been cancelled by the organisers. Refunds will be issued in the coming weeks. The 2021 edition of the tournament will take place from April 10 to 18, 2021.

It had become somewhat of a tradition: Rafael Nadal appears at his neighborhood Rolex Monte-Carlo Masters tournament predictably dominates his adversaries, and walks home with a substantial prize check in hand. He did that no less than eleven times since his first participation in 2005. But not so in 2019: the Spaniard with a Monegasque residence shockingly was knocked out at the semi-finals. The winner, Fabio Fognini, had gone into the tournament with low expectations and a series of stress injuries but then soared, eventually won the meet, and became the first Italian to claim a Masters 1000 title for his country.

However, this unexpected upset didn’t stop Nadal, the current no. 2 of men’s professional tennis, from going on to have what he later described as a “magical year 2019” with a string of wins, including the Davis Cup. Fabio Fognini, on the other hand, has since been plagued by injury after injury, to the point where he is still struggling at this time, just weeks from the Monaco tournament.

The chance to watch these two giants face off in the tennis circuit’s traditional clay season opener makes the 2020 edition Rolex Monte-Carlo Masters, to be held from April 11-19, particularly exciting. They are in good company, as the world’s number one seated player Novak Djokovic has also already registered, along with other top ranked athletes. The final official list of players is available on the tournament website from March 19.

Title holder Fabio Fognini kicks off the tournament during the draw on April 10. A mini-tennis exhibition is held on April 11 in the new gardens of the Place du Casino in the presence of Novak Djokovic and Rafael Nadal.

The online ticket office is now open and while many top events are already sold out, there are still tickets available. This year’s emblematic gala night takes place on April 17 in the presence of members of the House of Grimaldi, players, VIPs, and tournament partners, and features a stunning programme with international artists. This year’s highlight is Spirit of the Dance, the ensemble that has become an international sensation for its unique and original way of combining traditional Irish dance with the passionate Latino rhythms of tango, flamenco and salsa. Tickets for that event – including dinner, wine, and entertainment – cost €230 and may also be ordered online. 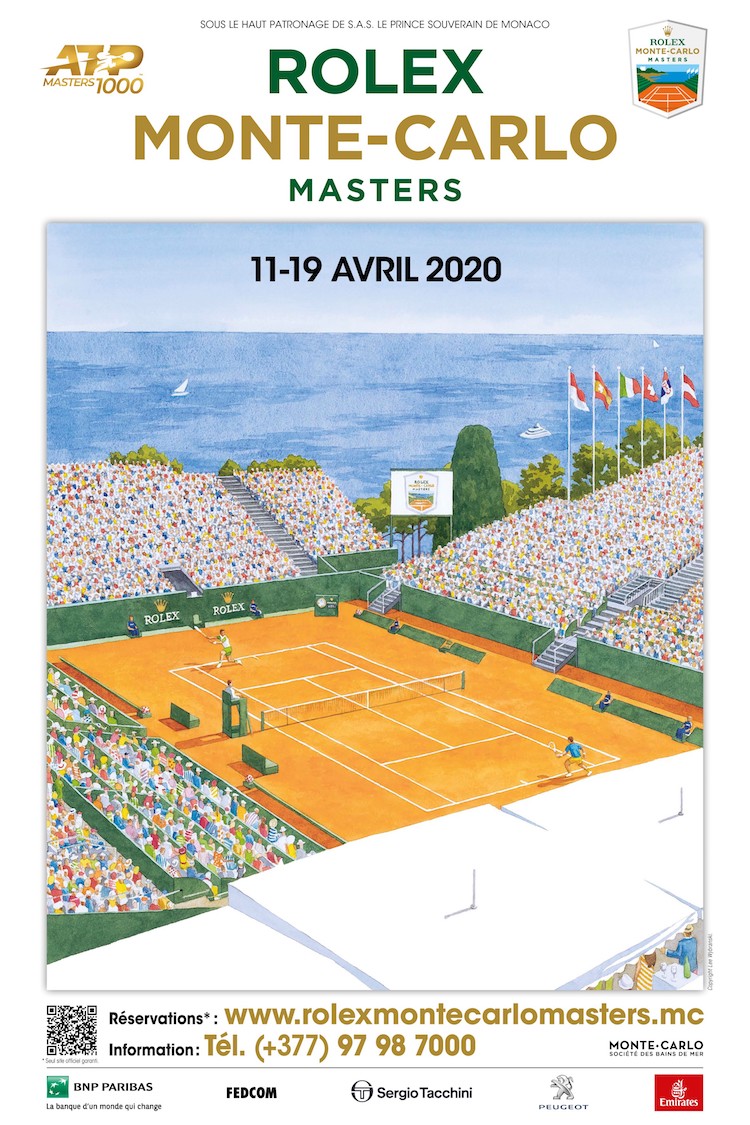 The Rolex Monte-Carlo Masters is the first European tournament in the ATP Masters 1000 category every season. It has increased its attendance over the years to a record of 136,000 visitors in 2018 and almost achieving as many in 2019. The organizers have particular reason to be proud this year, having been awarded the ATP’s “Award of Excellence for most improved venue in 2019″, recognizing the new infrastructures that were inaugurated last year, including a restaurant and a lounge for the players, and an interview room.