All good things must come to an end, they say. The legendary Waldorf Astoria Hotel is no exception. Much lamentation notwithstanding, it will be closing on March 1, 2017 after 86 years of faithful service to the rich, famous, and beautiful. The need for (more than just) a facelift has come about in recent years when the hotel’s décor – formerly the pinnacle of luxury and style – started showing signs of wear and tear … nothing you accept lightly when you shell out up to $800 a night… and when its internal infrastructure needed to be updated to suit the technological demands of the 21st century.

But not all is lost: For one, the Big Apple landmark will undergo an extensive transformation and is scheduled to reopen two to three years down the road as the “Waldorf Towers”, a smaller apartment hotel. And a well-liked local restaurant is preserving some of its culinary legacy.

If you’ve never had the chance to visit, here are a few numbers and trivia to give you a sense of the property’s spectacular scale. Encompassing an entire Midtown Manhattan block from 49th to 50th Streets and from Park to Lexington Avenues, the Waldorf Astoria has 1,413 rooms. Of those, 181 are located in The Towers, accessible via private entrance and occupying floors 27 through 42. And of those, 121 are historical suites. Among them, the “Cole Porter”, named after the famous composer who lived there for 25 years a five-bedroom, five-and-a-half bath configuration suite of about 400 square meters (4,300 square feet), typically rented out on a monthly basis. Prices start at $150,000… his piano, which is still in the suite, is included in the bargain. After Porter’s death in 1964, Frank Sinatra took over the lease, and he and his wife Barbara lived there until 1988. Another tidbit you probably didn’t know: There is an underground railroad that runs from Grand Central Terminal to the fourth floor of the hotel’s basement. When Franklin D. Roosevelt was the sitting president, that’s how they would bring him in because many people didn’t know he was in a wheelchair.

These suites are at the core of the future concept. While plans are not finalized yet, the new Waldorf is expected to be turned into an exclusive condo building. The historically important Art Déco style public areas may be restored to former glory and re-opened to the public once the Landmarks Preservation Commission decides which Waldorfiana will be labeled “interior landmarks”… from the grand ballroom to the “wheel of life” mosaic above the Park Avenue entrance, which was made with 148,000 marble tiles.

In its long and colorful history, the Waldorf has seen it all. Opened in 1931, it was the largest, tallest and most expensive hotel ever built, with 2,200 rooms, 47 stories and construction costs to the tune of $40 million. This may seem peanuts today but – just a couple of years after the infamous Black Friday which triggered the Great Depression – it was an exorbitant price tag. 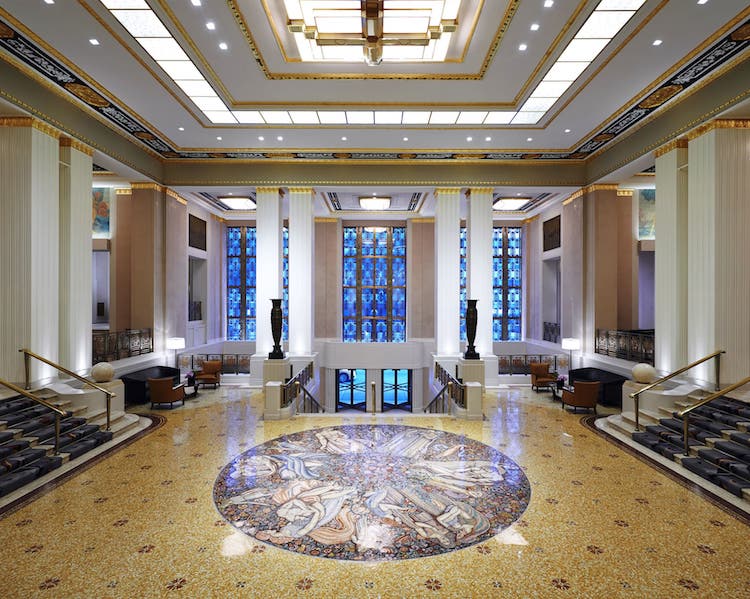 Over the years, the Waldorf hosted countless red carpets, balls, galas, United Nations functions, the legendary annual Al Smith fundraising dinners, mafia family reunions, and pretty much every high society event in town. This was where you could rub shoulders with aristocracy, politicians, movie stars, fashion icons, intellectuals, and beauty queens… hub and home to everyone who was someone.

Unforgettable, the annual April in Paris Ball between 1952 and 1959 whose mission was to strengthen Franco–American relations, share cultures, and help provide assistance to US and French charities… the place to mix and mingle for French and American celebrities from Juliette Gréco to Marilyn Monroe, the Duke and Duchess of Windsor to JFK and Jackie O. Its sumptuous décor has been the backdrop to many a movie scene, and for decades, the Waldorf was dubbed “Vertical Hollywood” due to the countless number of film stars gracing its doors. And the hotel’s restaurants created their own memories in the form of iconic dishes like eggs Benedict, veal Oscar, Thousand Island dressing, and well, yes, the Waldorf Salad. … “It’s the kind of place that, over a however-many-decade run, people had emotional attachments to. People made memories there. It had a multi-, multigenerational impact,” so says former Waldorf publicist Shelley Clark.

In 2014, the Chinese money elite swooped in and picked up the property at an astronomical $1.95 billion, marking the beginning of the end for the historic hotel as generations of New Yorkers and visitors have known it.

The new condos may be financially out of reach for the average person, but there is one place in town where a small piece of the Waldorf is going to be preserved: the renowned Black Barn on East 26th Street near Madison Square Park, run by John Doherty. The former Waldorf executive chef, who claims to have “fed more presidents and heads of state than any other”, plans to serve a prix fixe menu with dishes from “The Waldorf-Astoria Cookbook,” which he wrote with John Harrisson. This is not out of nostalgia, he says, because “the time for a thorough overhaul has come”, but many people genuinely miss the flair of class and elegance that reigned at the glamorous hotel for so many years. Put this recommendation on your NYC travel schedule while it is still there, as nothing lasts forever in the City that Never Sleeps.