You have to give it to Daniel Benoin, artistic director of Théâtre anthéa in Antibes: he really has an eye for exceptional talent, which he patiently develops. He also has a knack for expediting classic literature into the 21st century. And he has a magnificent theatre. No wonder the anthéa is the region’s most successful stage, with almost every show sold out well in advance. But when the playbill features Collectif La Machine, you know you’ll be queuing around the block for tickets. Their latest work, Peter Pan, La Prophétie de l’Oubli, which premiers March 1 and is programmed through March 14, is no exception.

In 2011, Felicien Chauveau and Benjamin Migneco pressed the ON button to set La Machine in motion, and it hasn’t stopped producing extraordinary theatre ever since. Like Collectif 8, they come from the Benoin stable of talent. The depth and maturity of their work hints at the master’s occasional guidance, and he willingly supports their work with ample opportunities for artistic residences but that is where his influence ends. Each of La Machine’s productions – Kafka’s Le Procès (2014), Don QuiXote L’Invincible (2016), and now Peter Pan (2017), to name but a few – is representative of their signature: great literature – not shying away from highly complex texts – is yanked into a theatrical universe where nightmares, dark humour, wit, and poetry meet. It is not feel-good theatre, it is not concerned theatre – it is a theater of troubled characters, dark colours, and stark scenography… theatre that provokes, questions, and confronts, but it invariably has an underlying tenderness and endearing intimacy to it. Treading that line is risky – it is all in the voice, the eyes, the nuances – but Felicien Chauveau, who is considered one of the best young artistic directors in France, and his fantastically talented group of actors, make it work. 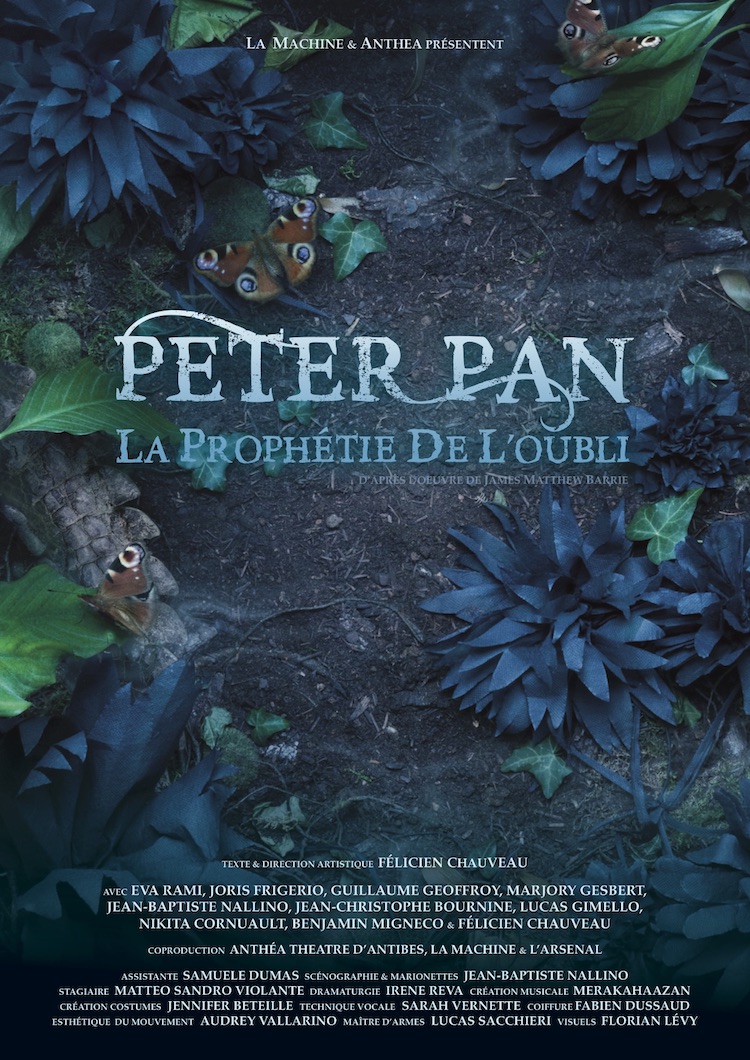 Peter Pan is yet another story that ventures into deeply personal territory. Originally written by Scottish playwright James Matthew Barrie in 1902 and first mounted as a play in London in 1904, the story explores the bewildering period of adolescence, in an era when childhood turned abruptly into adulthood. Every night, a young boy, Peter Pan, appears in Wendy’s room. He represents youth and energy. Wearing leaves for clothes, he does not know his age and has no idea what a kiss is… but he is a master thief. He takes Wendy and her brothers to Neverland, a world of ambivalent morality, eternal childhood (and childishness), immortality, and escapism. There, time is suspended, and the children, in search of themselves, leave reality behind for good. When they are no longer able to distinguish reality, they become the prey of the Prophecy of Oblivion… Lost Children.

In Felicien’s adaptation, Neverland becomes “Terre-Eternelle”, taking on the reflection of the world with its different cultures, communities and geopolitical conflicts. In doing so, he revisits what his authors, Kafka, Cervantès and Barrie, had in mind: a critique of social structures in an absurdly rigid society. Chauveau applies the same train of thought to his adaptation, using metaphors relevant to today’s world. “When I first read the original version in English, one term caught my attention. The house that the Lost Children seek refuge in, is called ‘The Home Under the Ground’. We decided to let our Lost Children evolve in an underground of its own kind, we turned them into punks.” When he first proposed the play to Daniel Benoin, the experienced director encouraged him to go for it but also issued a warning that “this play would kick him in the teeth”.

But Chauveau is an ambitious go-getter. And much of his confidence comes from knowing that his cast includes some of the most remarkable young actors of the region who doubtlessly all have a stellar career waiting for them: Felicien Chauveau himself (Father Time), but also his supremely talented colleagues Benjamin Migneco (Mister Smee, Le Chef des Sauvages) and Eva Rami (Wendy Darling), along with a newcomer who we will soon hear a lot about, Joris Frigerio (Peter Pan). As for Irène Reva, usually a staple in La Machine plays, she is not on stage this time round but signs responsible for the play’s dramaturgy. Every detail is meticulously researched and executed, from costumes to accessories and hair styles. And Jean-Christophe Bournine (alias Meraakhazan) wrote the music… an eclectic mix of steampunk and Irish folk music, electronic and contrabass, well matched with the theme of an imaginary country.

We will not tell you more about this play as it is best enjoyed with a blank canvas for a mind. However, if you are interested in technical details and the back story, have a look at the impeccably curated companion material… just another element that demonstrates the level of professionalism and perfectionism of Collectif La Machine – born, bred and buttered at the Théâtre National de Nice under Daniel Benoin’s reign.

Almost all currently programmed shows of Peter Pan, La Prophétie de l’Oubli at anthéa are sold out but try anyway – you may have to beg, plead, argue, bribe, or cajole your way into getting a ticket, but we promise you’ll be glad you did… this edgy, thoroughly contemporary and yet authentic Peter Pan is more than worth it.