In the days following the devastating blaze at the Paris cathedral, swift action has been taken to financially contribute to its reconstruction. PACA is doing its fair share, too.

Paris and the PACA region, “ça fait deux”, as the French saying goes, meaning not much love is lost between these two. But when the capital city suffers a dramatic event the South is always among the first to stand in solidarity and offer financial support. The recent fire of the Notre Dame Cathedral is no exception. To see this 850 year old monument – symbolizing France and its values – engulfed by ravaging flames was heart-breaking, and brought the nation together like few other historic events. No sooner than word got out, first initiatives started to rally.

Within 24 hours, regional political leaders announced that they were releasing emergency funds and setting up citizens’ pledge drives. Each Azurean government entity and community is participating in its own way to collect money, and is being generous and creative in its approach. So far, an eight figure amount, has come together, adding to the one plus billion euros already in the checking account earmarked to rebuild Notre Dame to its former glory.

First out of the gate, and possibly anywhere across France, was Mission Patrimoine, a highly respectable organization from Grasse which within hours after the horrific news broke, established and publicized a pool to collect donations. Just a few days later, this charity headed by professional firefighter Nicolas Doyen, reports to already have collected well over one million euro.

The regional government, Département 06, has committed to provide at least €1 million in emergency assistance.

In Nice, mayor Christian Estrosi has asked the Nice metropolitan government to authorize funds equivalent to 1 euro per inhabitant, amounting to approximately €600,000, and has requested the French government to authorize tax breaks for private donors. Collection boxes have been set up at the main town hall in Nice for any passers-by.

Antibes Juan-les-Pins is mobilizing to participate in the national funding effort for the reconstruction of the historic Parisian landmark.”The deep sadness felt by the French is commensurate with the strength of the symbol of the spire of Notre Dame which collapsed. Even more than an architectural heritage, it is our history and roots that have been threatened by the flames,” said Mayor Jean Leonetti. Specific assistance will be jointly decided by all the Mayors of the Sophia Antipolis urban community. Meanwhile, a collection box has been set up at the Antibes town hall for private donors (note: by cheque only, made out to Fondation du Patrimoine.) Online donation may be made via on the website of the Fondation du Patrimoine. 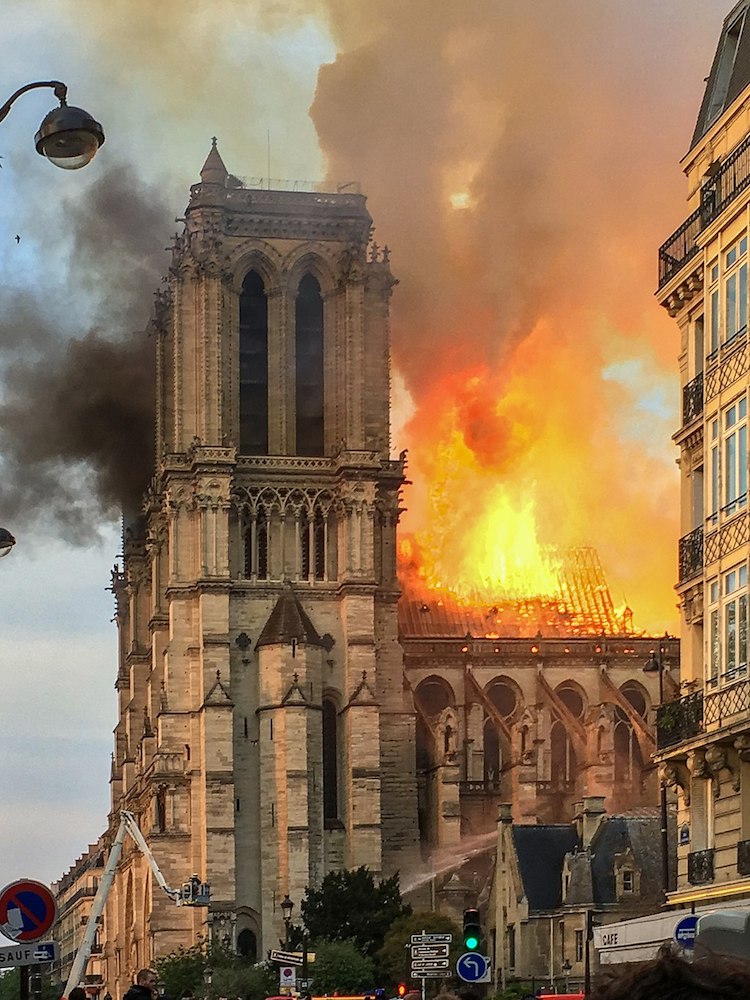 David Lisnard, mayor of Cannes, announced that the city will release exceptional financial assistance of 10,000 euros. Donation boxes are set up at the main town hall as well as its annexes where locals and visitors can deposit cheques made out to Fondation du Patrimoine. A link with all additional information has been set up on the city’s website. In view of the upcoming Cannes Film Festival, David Lisnard also appealed to the world of cinema. “Many international representatives from the movie industry are already in contact with Thierry Fremaux, the festival’s chief coordinator, to help finance the reconstruction of Notre-Dame de Paris,” the mayor said in a tweet.

The small community of Le Cannet, adjacent to Cannes, has also set up donation boxes in the neighbourhood town halls of Le Cannet, Rocheville and Garibondy. In addition to that, a community grant will be voted for during the next municipal council meeting. And finally, a charity event will be organized to rally even more support from the public.

Cannes’ other neighbour, Mandelieu-la-Napoule, has pledged financial assistance to the tune of 20,000 euros. In conjunction with the Parish of Saint Vincent de Lérins, the municipality installed donation boxes at the town hall and in public establishments.

“Admirable, however, as the Paris of the present day appears to you, build up and put together again in imagination the Paris of the fifteenth century; look at the light through that surprising host of steeples, towers, and belfries; pour forth amid the immense city, break against the points of its islands, compress within the arches of the bridges, the current of the Seine, with its large patches of green and yellow, more changeable than a serpent’s skin; define clearly the Gothic profile of this old Paris upon an horizon of azure, make its contour float in a wintry fog which clings to its innumerable chimneys; drown it in deep night, and observe the extraordinary play of darkness and light in this sombre labyrinth of buildings; throw into it a ray of moonlight, which shall show its faint outline and cause the huge heads of the towers to stand forth from amid the mist; or revert to that dark picture, touch up with shade the thousand acute angles of the spires and gables, and make them stand out, more jagged than a shark’s jaw, upon the copper-coloured sky of evening. Now compare the two.”

― Victor Hugo, The Hunchback of Notre-Dame

In addition to PACA’s contribution, the entire nation, as well as several of its wealthiest residents, reached deeply into its collective pockets. International governments, corporations, and celebrities have also promised to help in any way possible. Three Black churches in the US – each one burned down in an act of hate crime – shelled out over $1.8M (€1.6m) in support of the restoration efforts, showing the depth of the impact this tragedy has had not just on France but on the world at large. Meanwhile, the Vatican, rather than financial aid, is sending thoughts, prayers, and technical knowhow.

Even if Notre Dame’s symbolic spire and much of its wooden roof have been destroyed, there is some good news. Thanks to the rapid and efficient intervention of over 400 firefighters and countless impromptu helpers, no one was killed or seriously injured, all priceless artifacts were saved, and even the 200,000 bees living in three hives on the cathedral’s grounds survived the catastrophe unharmed.

According to current information, a computer glitch or a short circuit may be to blame for the disaster. Commentary on social media about the cause is rife, ranging from conspiracy theories to irony (such as, “are we going to have to put the Louis Vuitton logo on the new roof?”). Contrasting all sinister speculation, world-renowned Niçois cartoonist Kristian trains the spotlight on the world’s combined love and energy. 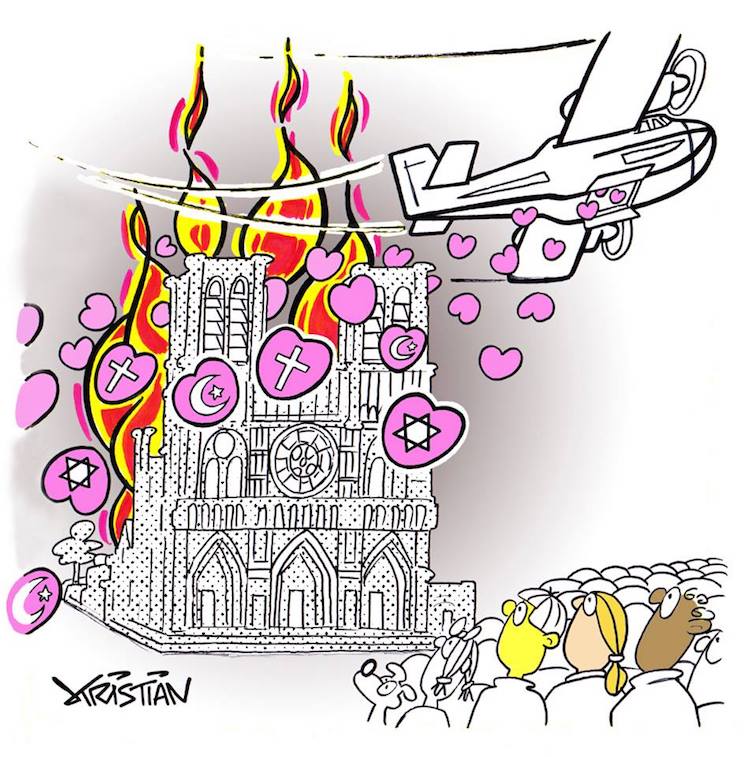 France would not be France if even this charitable financial support didn’t unleash passionate polemics about “undeserved tax breaks to the ultra-rich”, challenging why the poor, the sick, the planet, or any other worthy causes could not elicit the same kind of support. There is no doubt that these, too, are in dire need of help. But perhaps for this once it would be wise to cut out all the noise and just focus on the task at hand: restore a historic monument of epic proportions. French president Emmanuel Macron has ambitiously committed to doing so within five years, just in time for the 2024 Paris Olympic Games. Whether or not hurrying this along is the best move, is up for experts’ discussion. Even if money is not the issue, it will definitely not be easy to find the skilled artisans and craftsmen to execute this Herculean task.

And as if in answer to President Macron’s pledge “to restore the cathedral more beautifully than ever”, French landscape architect Clément Willemin throws out the question why the future roof of Notre Dame could not be open for everyone to enjoy. “[Deforesting] huge surfaces of oak trees to build the same roof structure as in the 13th century? Wait a few years to get those to dry? Spend millions over a structure that barely anyone has a chance to visit? Let’s rather expand the attraction of Europe’s most visited monument with a rooftop garden, dedicated to all the species of animals and plants that we have been erasing off the planet. All those are creatures of God as well indeed, if so.” 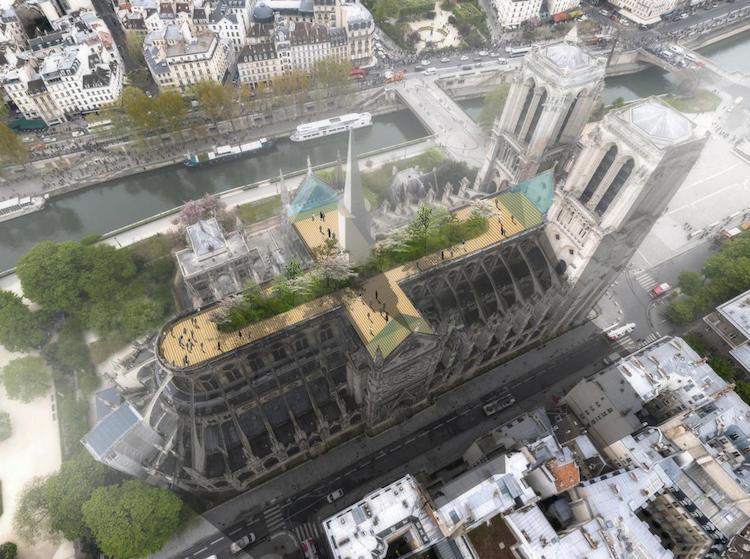 This is precisely the kind of ingenious, forward-thinking that has made Paris home to avant-garde design built on the splendor of its architectural heritage, like the Louvre and its Pyramid. We really hope that Paris, and France, listens and will use this unique opportunity, born out of tragedy, to make of Notre Dame the bridge between the medieval ages and the 21st century.