Three years after his breakout exhibition in Cannes, the Parisian artistic photographer is well on his way to international fame. But he does not let that define him.

Describing Boris Wilensky is easy, it seems: an affable and highly talented artistic photographer who has embarked on a great career after his first major show in Cannes in 2017. But then you dig a little deeper, and all of a sudden you find many more facets, and you end up wondering if this is not rather a thinker and philosopher who just happens to take fantastic pictures.

At the same time, his artwork takes the exact opposite course: highly complex at first sight, consisting of multiple superimposed layers and muted colors that lose themselves in each other, everything suddenly crystallizes as soon as you understand its creator’s intentions.

Boris Wilensky’s unique type of superimposed photography depicts the hybrid between humans and their urban landscapes – some poetic, many shocking, but all highly artistic and hauntingly beautiful. They all speak of contrasting elements such as time and space, beauty and destruction, present and future, nature and cities… but always with the Human at its centre. “Superimposition allows you to escape from reality and to formulate the message you want to send,” he explains his artistic style.

Boris’ first major show, titled “Hurban Vortex”, was presented at Le Suquet des Artistes in Cannes for six months in 2016/2017. “Its name is a contraction of Human + Urban, representative of boundaries that are increasingly blurred by constant movement – the game between the concepts of humanity and urbanity, extending into notions of modernity and identity, future, sustainable development, ecology and economy. The City, representing Progress and Modernity in constant growth, now becomes a “megalopolis”, or a “City-world”, a space built by humans to live in but one that eats them up in return”, explains Boris who thinks of himself as a “storytelling portraitist” rather than a photographer.

That first exhibition in Cannes, three years ago, was so successful that it opened other doors and above all possibilities to exhibit internationally. And Boris has since made an excellent name for himself well beyond France. After Cannes, the exhibition took off on a whirlwind tour in the direction of Dubai and Abu Dhabi, then Ulan Bator (Mongolia), and finally circled back to Belgium, on to Luxembourg, and from there to Boris’ hometown of Paris, participating in the FOTOFEVER show for contemporary photography at the Louvre in Paris, and displaying at the Deux6 gallery, one of the hottest addresses for rising artistic stars. Not to mention countless invitations to display at major festivals, galleries, and venues… 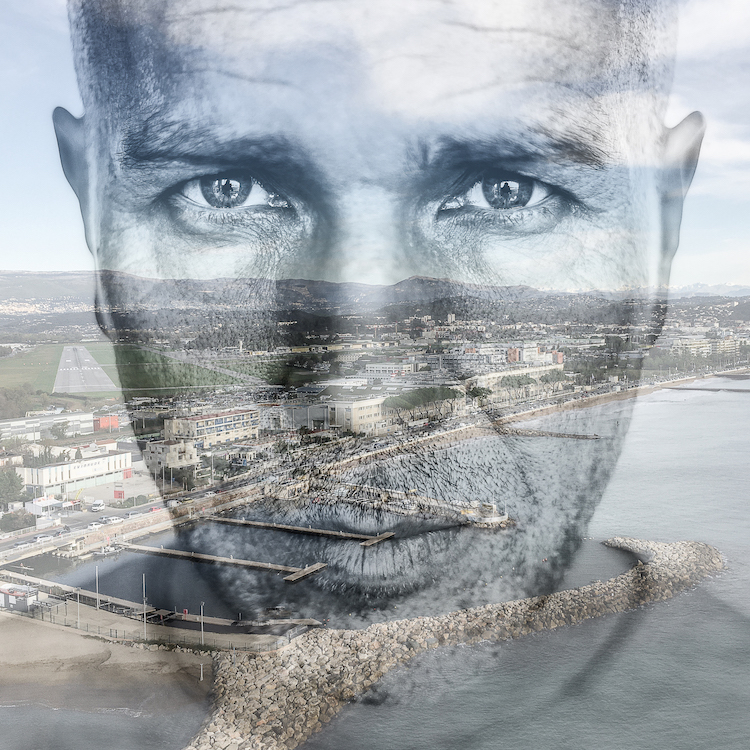 But prestigious as all of these events may be, none has eclipsed the one at the Suquet in Cannes which “without a doubt has remained the most important exhibition for me”, as Boris says.

Why is that, we ask? For several reasons. The first one is the duration of the exhibition. “Six months is not insignificant and leaves time for word of mouth. Some visitors have even come back several times,” he explains. Artists thrive on the personal contact with the people they meet. “I keep vivid memories of my exchanges with visitors, and their feedback. And I am also well aware that this show was a real springboard for exhibiting elsewhere.”

The second reason is the location. It may seem surprising but exhibiting in a former morgue rehabilitated as a cultural venue sends a beautiful message, he finds. “The morgue reminds us of the finiteness of life while art transcends this prospect and takes us back to life, to sharing, to the transmission of the living and of emotions.”

The United Arab Emirates, his first stop after Cannes, made for another memorable experience. “The public is of course different from the one in France, the relationship to ecology, to the City, and to the future is not the same, and it is exactly these differences that make for the richness of exhibitions in other cultures and locations.” 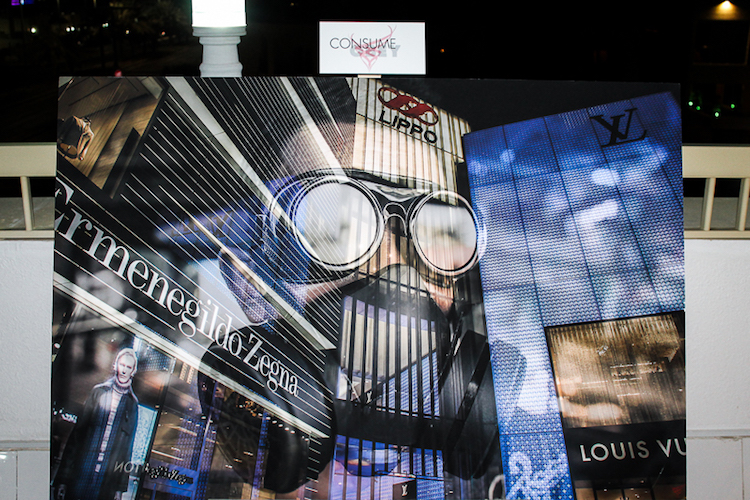 What makes Boris Wilensky’s artwork so appealing and so sought-after all around the world, is its universality and its relevance. We may all live in different countries, contexts, and cultures, but everyone can relate to the often overwhelming experience of living in an ever-faster world, which we are beginning to fear rather than embrace. But just as the onlooker seems to be pulled into the somber scenes of Boris’ large canvases, there is always a glimmer of hope in them somewhere – children, beauty, a touch of color, a smile, a kind look, or wisdom reflected on an old face – which reassures us of the strength and power of the good in the world.

With Boris’ work deeply rooted in reflection, in the literal as well as the figurative sense, he found it interesting to learn that this reflection is not the same depending on whether one is in France or abroad, young or old, male or female, urban or rural. In fact, it is the sum of past experiences that makes the whole artistic adventure fascinating, he says. “Facing the unknown always offers new avenues for reflection and learning. In the end, whether in public structures (town halls, general councils, Alliance Française offices in different countries…) or in private galleries, all exhibitions are important for me because each time the people I meet and the exchanges I have are different, which makes the reflection and sharing only grow stronger.”

After several years of back-to-back exhibitions, and for all his international success, Boris was itching to get back on the creative path though. He had also been exploring new forms of collaboration with private companies. So an unexpected call from Cannes was a godsend, and the ensuing project would become one of his favorite ones: in 2019, Cannois space technology firm Thales Alénia turned 90, and to celebrate this milestone in style, the company contacted Boris, initially asking to display his Hurban Vortex series – so representative of humans in a futuristic environment. But Boris had a better idea…

In collaboration with the company, he developed a new exhibit with a simple message: showing that the primary value of a company is its human value, the employees who make the place come to life day after day. “Marrying passion and work was our primary objective. I also see in the DNA of this company an element that we also find in the artistic universe and that we could call ‘what dreams are made of’”.

“You have to be a pretty big dreamer to look at the sky, at infinity, and think you’re going to send satellites up there. In the same way, when it comes to art, everything always starts with an idea that is not necessarily immediately realizable and that requires you to project yourself into the imagination. ‘Imagination is more important than knowledge,’ Albert Einstein told us. In terms of space conquest and art, nothing could be truer!” — Boris Wilensky

During a one-week photo shoot at the high-security facility in March 2019, he took close-up portraits of some 140 employees and managers, and about 2,000 photos of the various departments and production sites. Seeing the spectacular results, it was soon decided to create, in addition to a temporary exhibition, a coffee table book in the style of Hurban Vortex, which would showcase 90 Thales Alénia Space employees on the occasion of the 90th anniversary of the Cannes site. Although this book is for staff only and not publicly sold, it soon became an important cornerstone of Boris’ body of work. 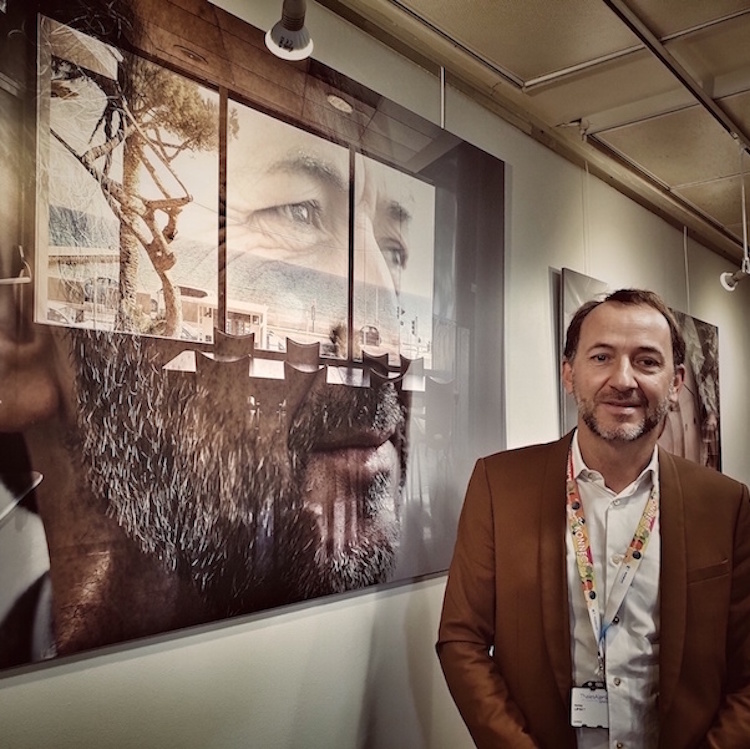 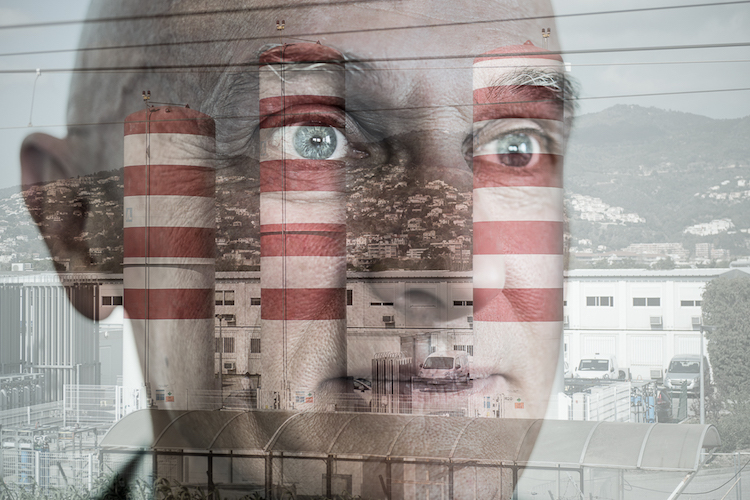 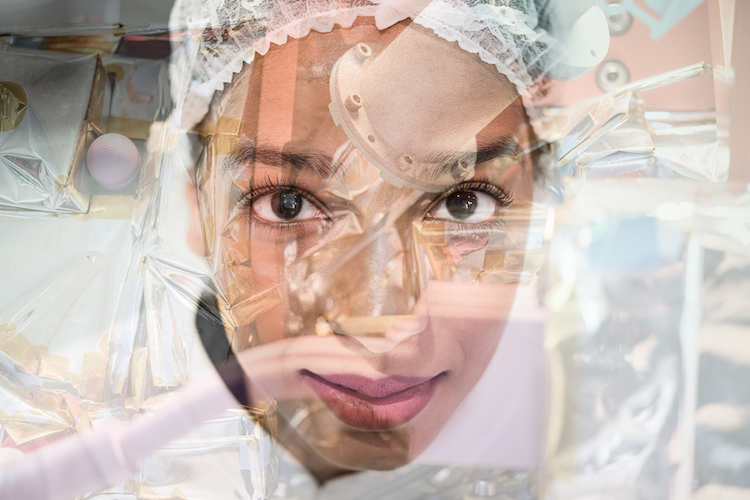 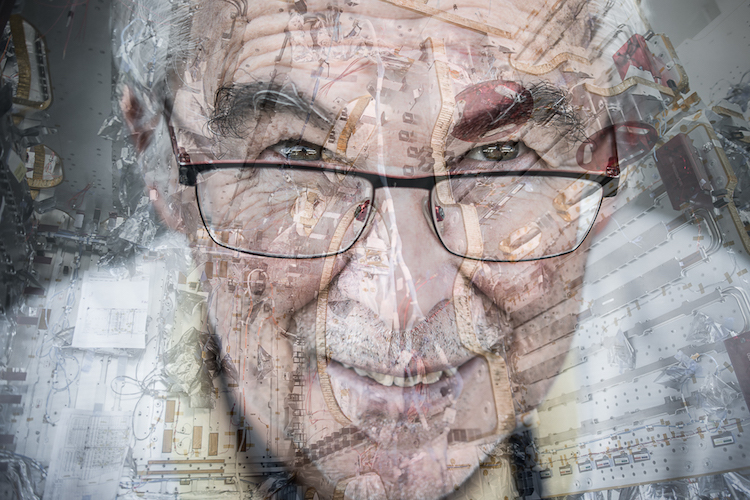 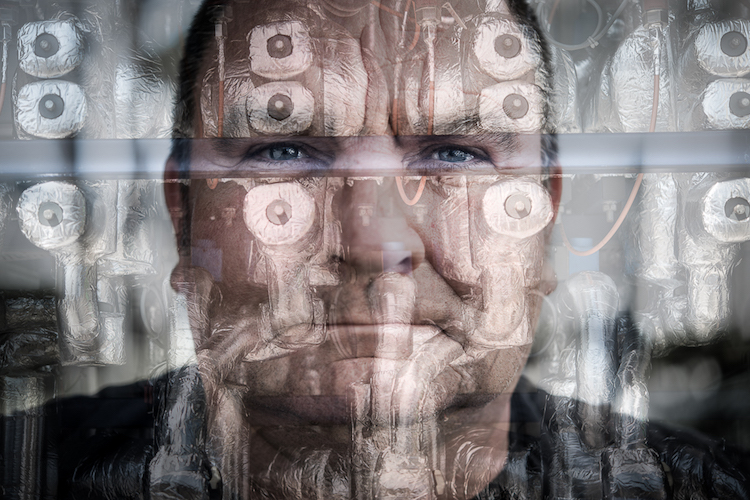 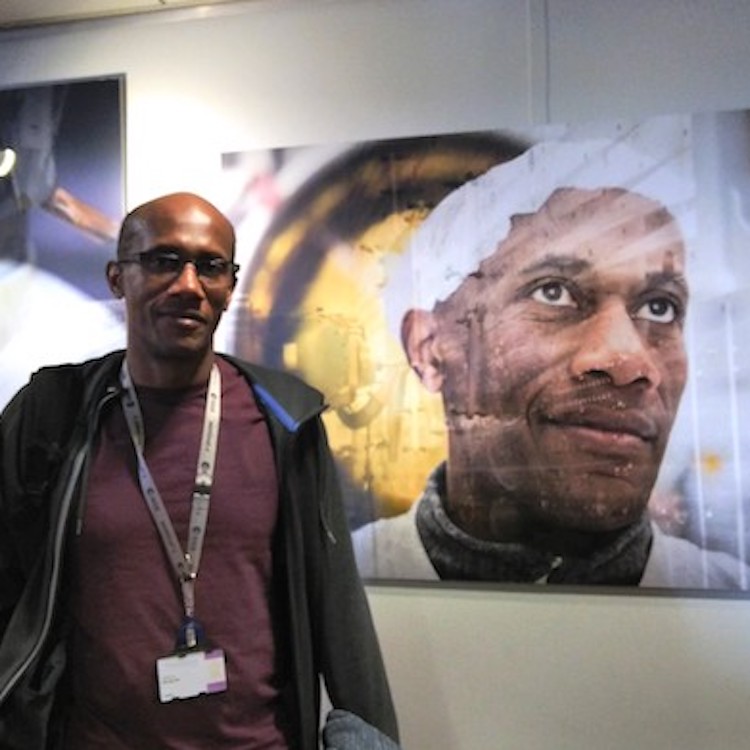 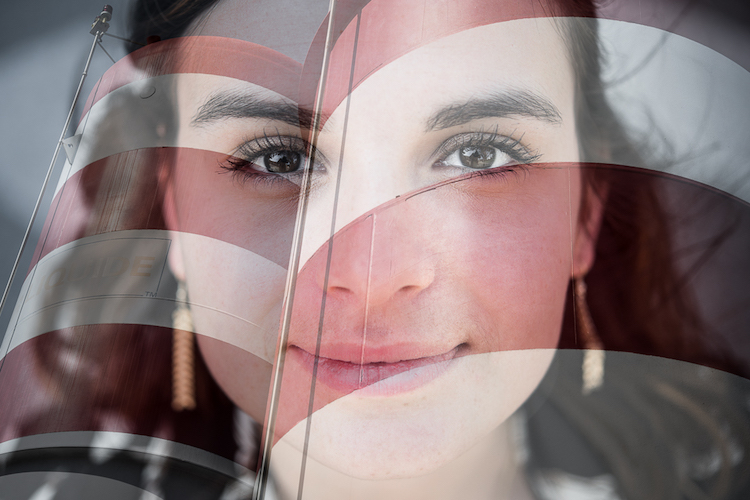 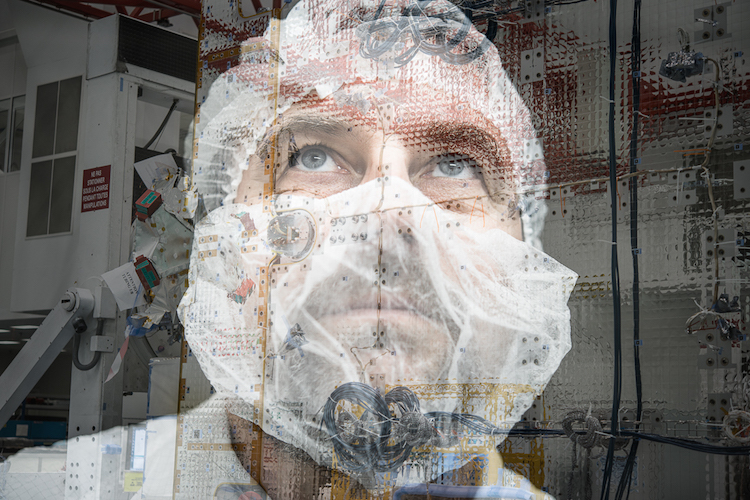 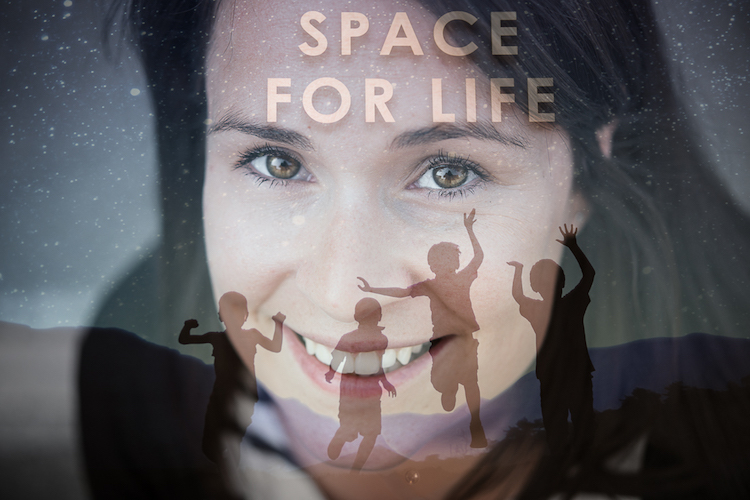 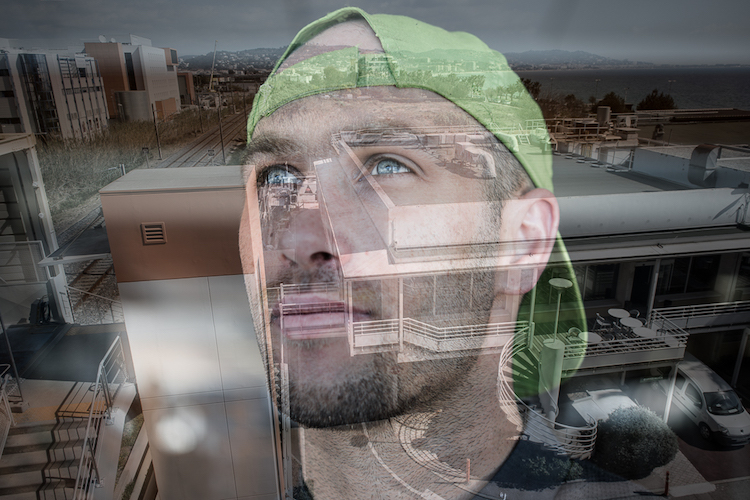 A similar collaboration was envisaged this spring with other companies in the space industry but the crisis linked to COVID-19 stopped everything cold and forced him to postpone all projects. “I am well aware that the companies’ priority is to get back to basics and to resume activity as soon as possible. Understandably, not everything related to the arts will be on the front burner in the coming months,” Boris reflects. “However, we are also realizing, through this current global health crisis, that our entire social and economic system is only held together by the will and sometimes the self-sacrifice of men and women who passionately do their work, sometimes at the risk of their lives.” And to thank these unsung heroes, he hopes to be able to offer health services (hospitals, intensive care units, emergency services, etc.) the same kind work that Thales Alénia has requested of him, valuing the human being at the centre of their operations. “I dream of paying tribute in my own way to those who save lives and take care of others.”

At the same time, he also intends to continue to travel freely and go to the ends of the earth to find inspiring photographic subjects, as before. Movement is intrinsically inspiring for an artist, he says. Currently in pandemic-related isolation in Paris, he still finds ways though to keep his skills honed, presenting a unique perspective of the roofs of the capital from his vantage point high up on the 5th floor, which he shares with his followers on his social media channels. 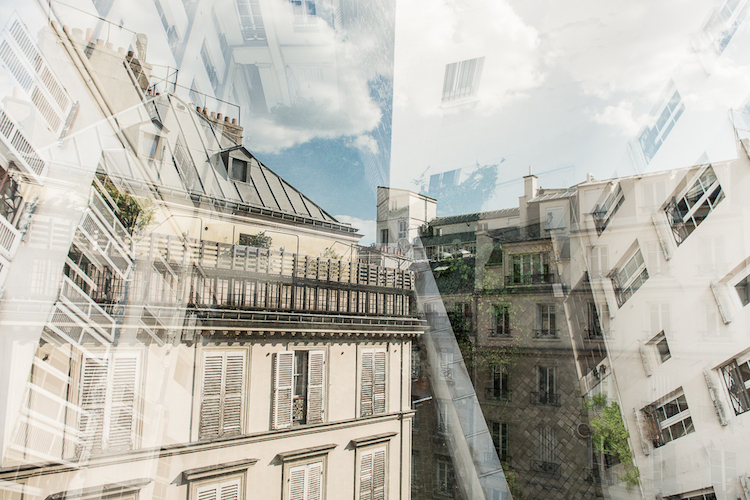 Asked if there was anything he is particularly proud of these past three years, Boris points to his work acquainting children with his art. “It’s a fantastic experience. Opening the artistic field to children is something that is necessary. It broadens the mind and encourages the kind of dreaming we were talking about before,“ he explains. He likes that children have no filter. “They don’t ask the same questions as adults but theirs are very often highly relevant. Several times, I was amused to find that they asked me questions that I had never asked myself and that made sense.”

He firmly believes that the future belongs to young people, whatever happens, and awaken emotions and ideas in those who will make the world of tomorrow is important and meaningful. That in itself makes the quest for “meaning” inherent to the Why of creation, he philosophizes. “Like everyone else, I observe what is happening today on the planet and I wonder. The themes addressed in Hurban Vortex are all coming to the forefront now… whether it is globalization, the uncertain future, questions about our economic models and consumer society, sustainable development and more generally the place of humans in all this.”

“Art is undoubtedly essential because it allows us to imagine the contours of an uncertain future and an uncertain world. I hope that once this crisis has been mastered, we will have the courage to question ourselves and to reconsider our model of civilization in favor of one that does not endanger humanity. A pandemic can be managed and the consequences are not necessarily irreversible. Global warming, the depletion of the planet’s resources and the fall in biodiversity is another matter. I hope that we will all learn from it.” — Boris Wilensky

Turns out that Boris Wilensky is as multifaceted as his work: he is a thinker and a philosopher, an observer and a storyteller, a dreamer and a realist, an artist and a teacher with a camera and eyes wide open to the world and the human condition – and if you look closely, it’s all right there, reflected in his artwork…