Cannes has two faces: as France’s answer to Hollywood it boasts of red carpets, movie stars, luxury brands, and swanky hotels on the famous Croisette shopping mile. And then there is the quiet, genteel Cannes of the Belle Époque with its sumptuous villas and the artistic flair. An eight lane expressway divides the flashy “Banane” district by the beach from the quiet hilly neighborhoods which hold quite a few jewels for those willing to look for them.

Just a little over a mile from the seashore, in the leafy Pézou neighbourhood, the Bellini Chapel is one of Cannes’ hidden gems. It’s a bit of a climb but once you made it up the steep hill, you’ll be in for a pleasant surprise. Tucked in a private estate away from the main road, you don’t just accidentally stumble across it. A small sign points you in the right direction, but blink and you’ll miss it. 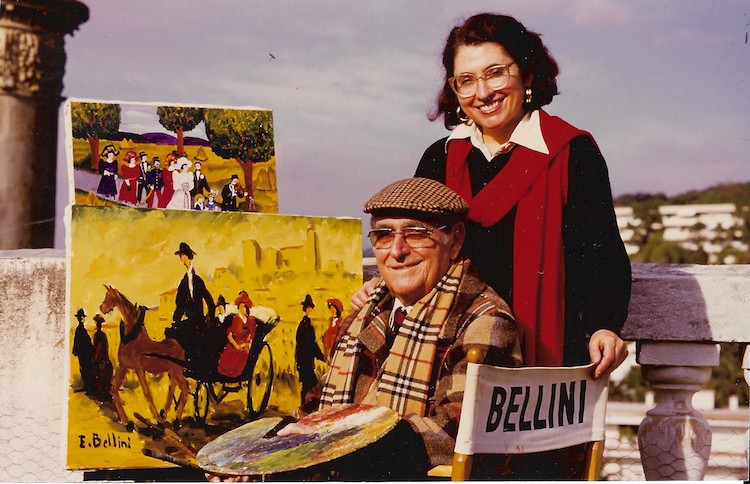 The small neo-baroque chapel is a part of the Villa Fiorentina estate, nestled in a Tuscan-inspired park. In 1953, the famous painter Emmanuel Bellini acquired it and made it his atelier all while keeping the architectural features of the chapel intact. After his death in 1989 his daughter Lucette turned it into a museum in her father’s honor, known as the Bellini Chapel.

As you enter the small, light-flooded space, Bellini’s cheerful spirit still lingers and draws you in instantly. Easels, paintings hung on the wall without mathematical precision, a comfy couch and well-worn oriental rugs, sturdy oak furniture, books, plants, a desk for paperwork, knickknacks… this is the furthest thing from a traditional museum. It has a pleasantly lived-in feeling to it, as if the artist had just stepped out for lunch a minute ago.

A good number of his works are on display here, skillfully offset against the ornate, light flooded backdrop of this picturesque 19th century chapel. The lovely lady who welcomes you is none other than Lucette Bellini, the painter’s daughter. She is only all too happy to share her memories of her illustrious father, along with some anecdotes. And, as it turns out, she is an accomplished painter in her own right. Some of her own naïve oeuvres are also shown here. 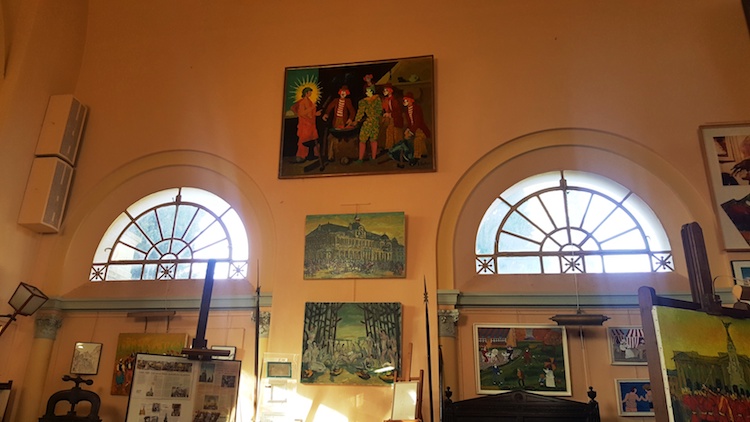 Born in Monaco in 1904, Emmanuel Bellini’s childhood and youth was filled with the colours and scents of the Mediterranean, and the elegant lifestyle of the Belle Époque – memories which would accompany him a life time and which he sought to capture in his work as an artist. He showed promising talent early on but becoming a painter was not in his original plan. Instead he apprenticed with Charles Damas, an architect who had had a hand in the designs of the Paris and Monaco opera houses and also built the Palais de la Méditerranée in Nice.

As a young man, Bellini left Monaco to settle down in Cannes with his young family and worked as an architect – among the projects he collaborated on are notably landmarks like Marché Forville in Cannes and Fondation Maeght in St. Paul de Vence. He would continue to working in his chosen profession until his retirement in 1977.

But the dreamy Mediterranean scenery, the blue skies offsetting white sailboats, the Beaux Arts style façade of the Monte Carlo casino giving way to the vista of rugged Alpine mountains… all that eventually drove him to the easel. His brightly coloured oils and watercolours combine distinct touches of fauvism and remote hints of impressionism. He was also a talented graphic designer and lithographer. The famous posters for the Automobile Club of Monaco, and gala events in Monaco and Cannes are his work. And he painted frescos, murals, and theatre sets, not least for Théâtre Francis Gag in Nice. 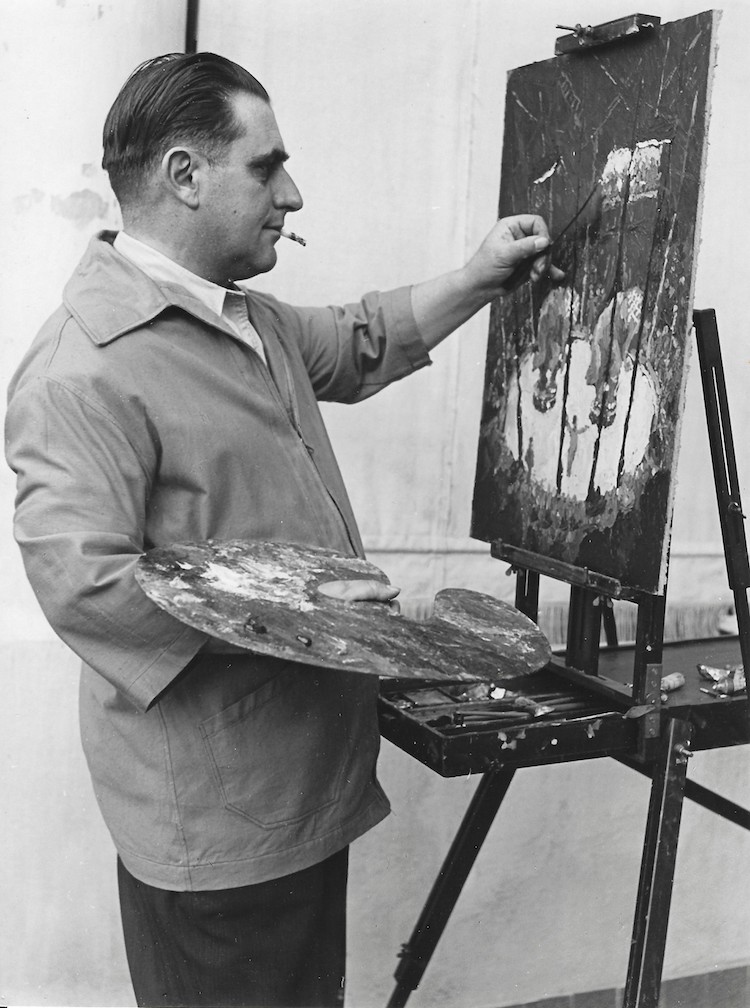 Bellini was as imaginative as he was prolific: he tackled over 40 different themes. Emblematic among them was the cart or the carriage, a reminder of his childhood when he looked after the horses in the evening after their day’s work. But he was also drawn to clowns, the circus, flowers, architectural elements, domes, Red Venice, Paris, Nantes, Monaco, the French Revolution, Eugenio Lucas Velázquez, fairytale landscapes, and many others… all connecting to the Belle Époque in one way or another.

As the artist’s fame travelled across borders, he exhibited both regionally and internationally, and he would do so for the next 40 years until his death in 1989, at age 85. He was particularly appreciated in his native Monaco. In 1972, HSH Prince Rainier III invited him to present a retrospective of 150 of his works at the (now defunct) legendary Sporting d’Hiver venue. After two more gallery shows, the Principality honoured its famous son’s 80th birthday with another master exhibition. 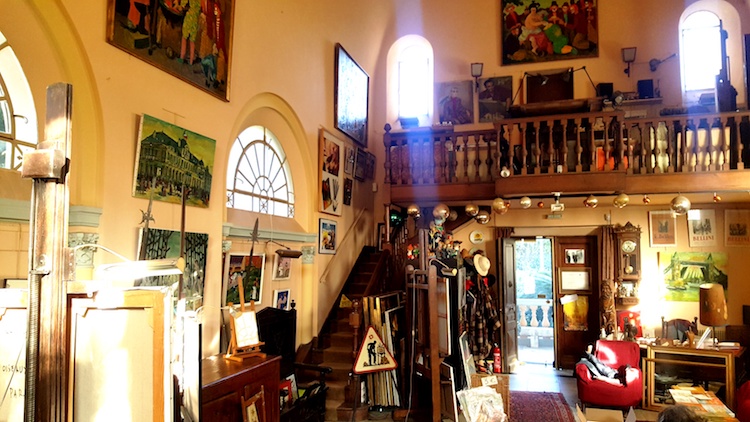 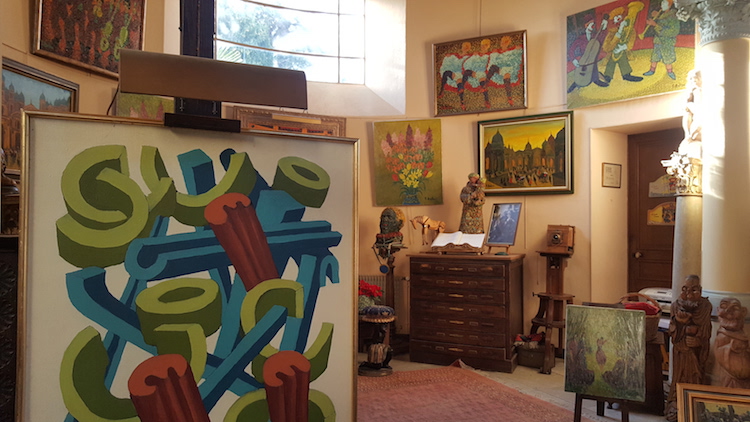 The chapel bears witness of this exceptional artist’s work. There are also books, catalogues, and newspaper clips to round out the story. For those who read French, this article by his biographer Bénédicte Lecat gives a good and detailed overview for those who cannot travel here in person. And both women co-authored a book, simply titled “E. Bellini” which is currently hard to obtain but worth chasing after for its wealth of information and beautiful illustrations.

During the pandemic, the chapel’s opening hours are subject to national regulations (at the time of writing in February 2021, it is open and can be visited Monday through Friday from 2 pm to 4 pm but your best bet is to check the website for latest info or call ahead. Standard sanitary protocol (masks, gel, distancing) applies.

Lead image © Natja Igney; all other photos as credited