If you are a talented and passionate animal photographer, this international contest is for you!

Cameras at the ready! On the occasion of its 15th anniversary, The Prince Albert II of Monaco Foundation is launching an international photography contest on the theme “Humanity – Wildlife: crossed destinies and shared territories”.

Registration for the inaugural edition of this event is now open to anyone from around the world through March 28th, 2021. Participants can submit up to five photos in one or each of the competition’s categories

on a dedicated page of the Photocrowd platform. 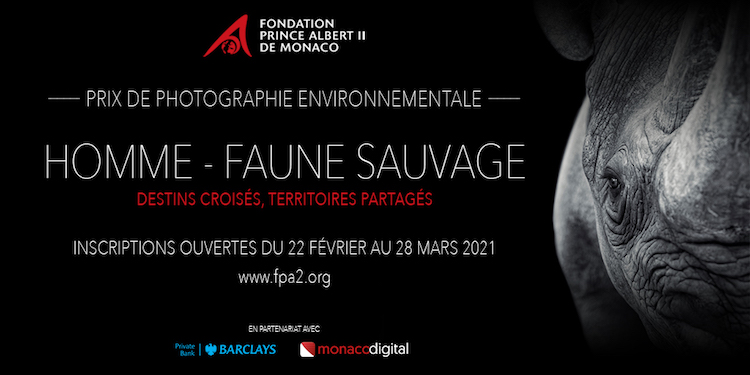 “We are very pleased to launch this contest with high quality partners and a jury of recognised and passionate professionals, around a strong theme, especially relevant in the current context of the health crisis. We hope that this campaign will contribute to efforts deployed to develop a more harmonious relationship with nature,” Vice-President and CEO of the Foundation Olivier Wenden explains.

The jury, made up of professional photographers and representatives of organizations committed to sustainable development, will select the winner of the Foundation’s Environmental Photography Award as well as the winners for the three categories of the contest.

Members of the jury:

The general public can also vote for their favourite photos directly on the contest page.

The Grand Prize winner will be awarded the title “Prince Albert II of Monaco Foundation Environmental Photographer of the Year 2021”, a cash prize of €6,000, and a VIP invite to Monaco, including travel and accommodation, for the opening of the exhibition and the 15th anniversary celebrations of the Prince Albert II of Monaco Foundation. The winners in each of the three categories will receive €1,000 each. The three public prizes are endowed with €500.

The most beautiful photos will be presented from May 4th to June 1st, 2021 as part of an urban exhibition in the Principality of Monaco, organised on the occasion of the Foundation’s 15th anniversary.

Having witnessed the profound upheavals wrought by the effects of climate change on our ecosystems, HSH Prince Albert II of Monaco decided in June 2006 to set up a Foundation dedicated to protecting the environment and promoting sustainable development at a local and global scale.

The Prince Albert II of Monaco Foundation aspires to bring together scientists, political decision-makers and economic and civic stakeholders behind a vital objective for our future – that of protecting nature and biodiversity. The Foundation’s action has led to some encouraging victories being won, whether in safeguarding threatened species or improving living conditions in rural communities by implementing new sustainable and ethical solutions. Every project supported represents another step forward for the Planet, whose state of health calls for more ambitious and decisive measures.

The Foundation focuses its efforts on three principal domains of action: Climate Change, Biodiversity and Water Resources and funds projects in three priority areas: the Mediterranean basin, the Polar Regions, and the Least Developed Countries. In fifteen years, the Foundation has contributed to more than 586 projects.

“Because to save our planet, to change a system that destroys it step by step, we will need all the ideas, all the willings, all the mobilizable means. We will need to multiply the initiatives, from the most confidential to the most global ones, from the most classical to the most innovative ones. And we will need to do everything to convince the world to change with us. This is our destiny today, the destiny of our generations: taking these problems head on, to save this planet before it is too late. It is our responsibility and that is why we are here.”