The title role of Count Ory – a handsome rogue who finds all women irresistible, particularly Adèle – is sung by Russian tenor Maxim Mironov, with Mexican soprano Rebeca Olvera as Isolier, the count’s page, who also happens to be in love with the countess. Raimbaud – a friend of the Count – is sung by Italian baritone Pietro Spagnoli.

In 1825, Rossini – living in Paris – was commissioned to write a special work to commemorate the coronation of the Bourbon King Charles X. Rossini produced a somewhat dazzling score entitled The Journey to Rheims, but the work was unable to be easily assimilated into the standard operatic repertoire. In 1828, however, Eugène Scribe – one of the authors of a successful play, Le Comte Ory, which he had cowritten in 1816 with Charles-Gaspard Delestre-Poirson – transformed it into the libretto of a comic opera. Rossini – using some of the music from The Journey to Rheims – created the score for an opera which retained the title Le Comte Ory, and which premiered in Paris at the Opéra Le Peletier, on 20th August, 1828.

Described by Gramophone magazine as “Rossini’s piece of folly”, this two-act opera emerges as a series of jokes, misunderstandings and extraordinary disguises – an hilarious tale of deception and seduction. Set in France around 1200, when the Lord of Formoutiers and most of the men have left for the Holy Land to fight in the Crusades, it tells of the Lord’s sister, Adèle, who is left alone in her castle, having to deal with the attentions of the somewhat strange Count Ory and his promiscuous page, Isolier. A bizarre set of incidents follows, during which Ory disguises himself as a hermit in order to take up residence outside the castle. Isolier, unaware of his master’s disguise, confides in the hermit that he’s in love with Adèle, and of his plans to disguise himself as a pilgrim to gain access to the castle. Ory agrees to help him – planning to turn things around for his own gain – but once inside the castle, the Count is unmasked by his tutor and his cohorts, and humiliated in front of Adèle. With the news that the Crusaders are due back within days, Ory plans one more assault on the castle – this time he and his supporters disguise themselves as nuns to gain access. Isolier hatches a plan to trick his master into mistaking him for Adèle, and with the shout of trumpets which signal the return of the Crusaders, Ory is once more embarrassed, and left with no option but to depart from the castle.

Maxim Mironov has appeared on the stages of some of the most prestigious opera houses and festivals of the world, amongst which are Teatro Real Madrid, Teatro Alla Scala Milan the Festival of Aix en-Provence, Glyndebourne Festival, Théâtre des Champs-Elysees and Opera Garnier in Paris, Théatre de la Monnaie in Brussels, Staatsoper Berlin, Vienna Staatsoper and Theatre An der Wien, Los Angeles Opera, Washington National Opera and Tokyo’s New National Opera. Later this year, he is due to perform in a recital of works by Rossini at the Konzerthaus in Vienna and to participate in the Rossini Opera Festival in Pesaro.

Cecilia Bartoli takes up the position of director of Monte-Carlo Opera in January 2023, becoming the first woman to do so in the history of the opera house. Among the projects undertaken by Ms Bartoli was the establishment of her Music Foundation in 2007, dedicated to the advancement of music, but also enabling promising singers to record under professional conditions. In 2012 she became the first female artistic director of the Salzburg Whitsun Festival, each year bringing a new theme to the event, which this year is Roma Aeterna, featuring George Frideric Handel’s first oratorio, Il trionfo del Tempo e del Disinganno, conducted by Gianluca Capuano. An idea initiated by Cecilia Bartoli gave rise to the formation in 2016 of the period instrument orchestra Les Musiciens du Prince, with the support of His Serene Highness Prince Albert II of Monaco, and Her Royal Highness the Princess Caroline of Hanover. The ensemble, which has toured some of Europe’s greatest concert halls, comprises international musicians playing ancient instruments, reviving the tradition of court music from the great princely, royal and imperial dynasties.

Rebeca Olvera, a member of the ensemble of Zürich Opera, most recently appeared for the company in Die Csárdásfürstin (The Riviera Girl or The Gipsy Princess) by Hungarian composer Emmerich Kálmán, and Massenet’s Manon. Ms Olvera has also performed at venues such as the Komische Oper Berlin, Wiener Konzerthaus, Severance Hall with the Cleveland Orchestra, Salzburger Festspiele, Edinburgh Festival, Théâtre des Champs-Élysées, Festspielhaus Baden-Baden, Tonhalle in Zurich and the Bayerische Staatsoper Munich.

Pietro Spagnoli – renowned for performing leading roles in the operas of Mozart, Rossini and Donizetti – had an auspicious start to his career, as an alto in the choir of the Sistine Chapel. Having made his operatic debut in 1987 at the Festival della Valle d’Itria, he appeared in Pergolesi’s Livietta e Tracollo at the Teatro del Maggio Musicale in Florence that same year, and is now a regular performer for companies such as La Scala, Milan, Vienna State Opera, Teatro Real, Madrid, Berlin State Opera and the Metropolitan Opera, New York.

Also in the cast are Nahuel Di Pierro as Le Gouverneur, Liliana Nikiteanu as Dame Ragone and Jennifer Courcier at Alice. 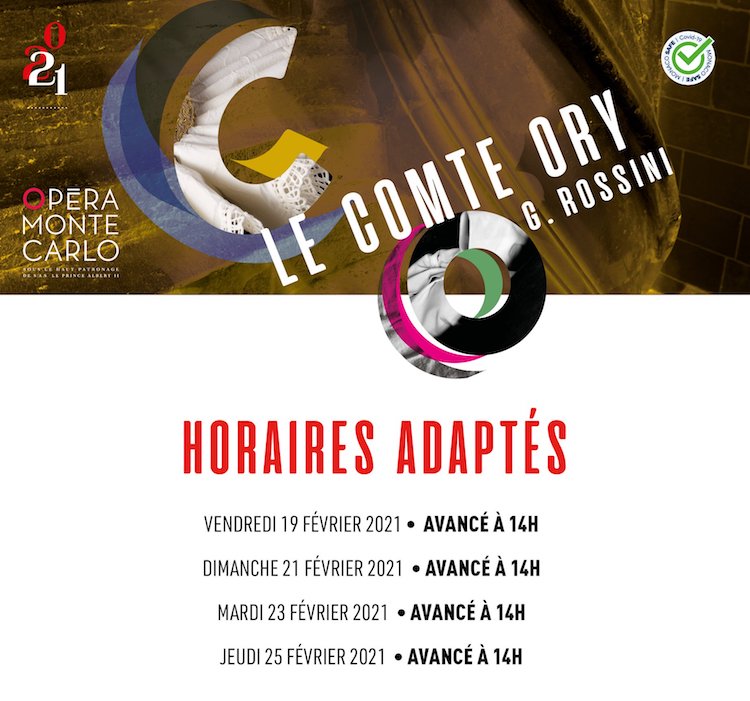 This production of Le Comte Ory – originally by Zürich Opera – is under the musical direction of Jean-Christophe Spinosi, violinist, conductor and Founder of the Ensemble Matheus. He conducts a new production at the Théâtre du Châtelet in Paris each season, and his most recent appearances as a guest conductor have been with the Handel & Haydn Society in Boston, New Japan Philharmonic Orchestra, Frankfurt Radio Sinfonie-Orchester, Orchestre Philharmonique de Monte Carlo, and the Verbier Festival Orchestra.

Stage direction is by Patrice Caurier and Moshe Leise, decor by Christian Fenouillat, costumes by Agostino Cavalca and lighting by Christophe Forey.

Maestro Spinosi leads Les Musiciens du Prince-Monaco and the Chorus of the Monte-Carlo Opera (under the direction of Stefano Visconti) in matinée performances of Rossini’s Le Comte Ory at the Salle Garnier, Monte-Carlo Opera, on 19th, 21st, 23rd and 25th February. Book online via this link.