Word on the street has it that there is this really cool priest in town who is also quite the accomplished painter in his own right.

We set out to get to know him, and were in for quite a surprise. If your idea of a Catholic priest consists of a guy in a long black cassock clasping a Bible, and eyes piously turned heavenwards, you have yet to meet Father Yves-Marie Lequin. Not to say that there aren’t occasions when he trades in his casual civilian khakis for a chasuble and his artist tools for a prayer book, but he is as down to earth and fun as you could possibly imagine.

Apart from following his spiritual calling to become a Dominican Friar, Yves-Marie has racked up quite a CV as a philosopher and a psychoanalyst. His most notable talent though is an artistic one. He is an accomplished painter, a passion he has pursued for many years and which has earned him great reputation.

After spending 18 years in Togo and the Ivory Coast, Father Yves-Marie came to Montpellier in 1997, and it was there that he was introduced to painting. It soon became important to him, and set him on a path to study the arts. Doing so, he also ventured far afield, spending considerable time abroad in the UK and in Belgium. 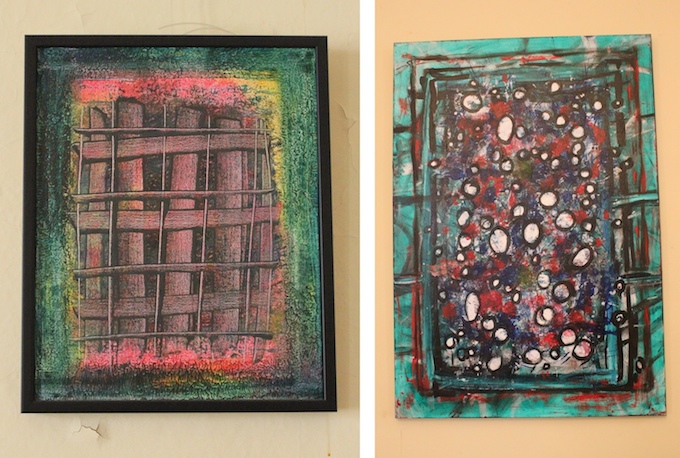 Ten years ago, he was called to Nice. “I really did not want to go to Nice. The first three years here, I didn’t like it and I just wanted to leave. But then something happened that completely changed my attitude. I saw a photo showing the city from a different perspective – taken from the sea, looking onto the town set against the mountains. And then I understood… this is a town at the crossroads, a refuge for people, and many of them are artists. That is how I learned to love Nice. I then actually asked to stay, and now I am totally happy here,” Yves-Marie tells us.

There are so many things he now really loves about Nice. The openmindedness, the strong yet relaxed relationship between the church and the Niçois, the ease of forging relationships, the laid-back Mediterranean lifestyle. All that is a natural fit with his outgoing personality. Most of all though, he loves the artistic community here. “There are so many talented artists here, and you find more creativity than anywhere else outside Paris.” 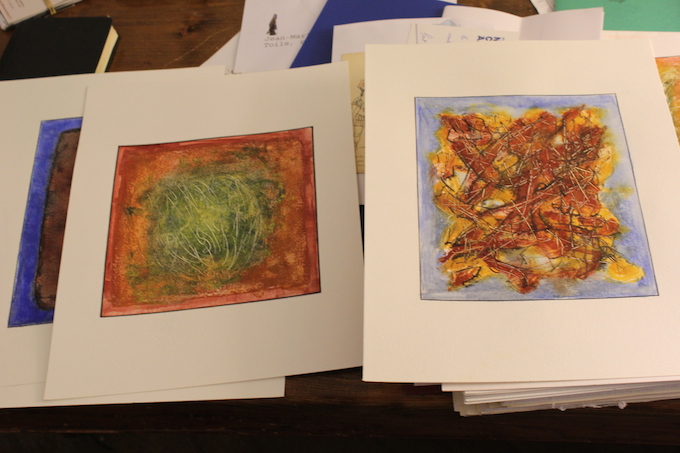 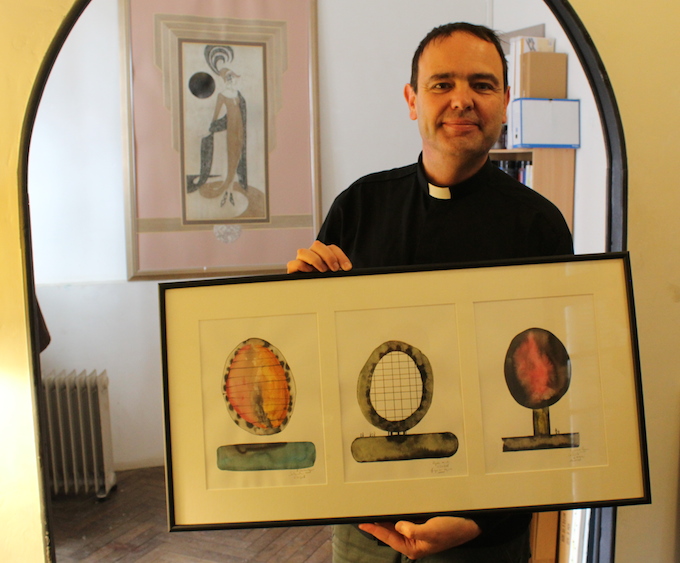 Small wonder then that the city’s vibe inspired him to hone his own artistic skills. In his Dominican convent in Vieux Nice he has his own atelier and paints prolifically, often 12 to 15 œuvres in one session, using different techniques from acrylics to water colour and ink. He calls his style “a way of writing… an artist’s way of expressing himself when he cannot do it in words.” His paintings certainly are expressive – mostly abstract with vivid colours intended to provoke reflection, always with a willed imperfection, and often arranged into triptychs that tell a complete story. “I love the movies. And painting is like making a movie on the smallest possible budget,” he says, borrowing a Godard quote.

Much of Yves-Marie’s artwork is displayed all over the convent – but not only there. He also exhibits publicly, and his paintings are regularly on show in a gallery in the posh 17th arrondissement of Paris and other places. And the price tag mirrors the recognition he enjoys in art connoisseurs’ circles – upwards of €2,000.

Looking at his skillful art work, you might forget for a moment that Father Yves-Marie is also a Dominican priest. Which is another perfect match. Appreciation of the arts and engagement with artists is a hallmark of the Dominican order, whose Fra Angelico is the patron saint of artists. Among the best-known local examples of their support and promotion of the arts are the Chapelle Matisse in Vence and the Convent of Sainte-Marie de la Tourette, the latter built by architect Le Corbusier. The Dominicans are also close to theater. Yves-Marie compares preaching to acting in some way… You’re up there on a stage, reaching out to your audience by the force of your words. 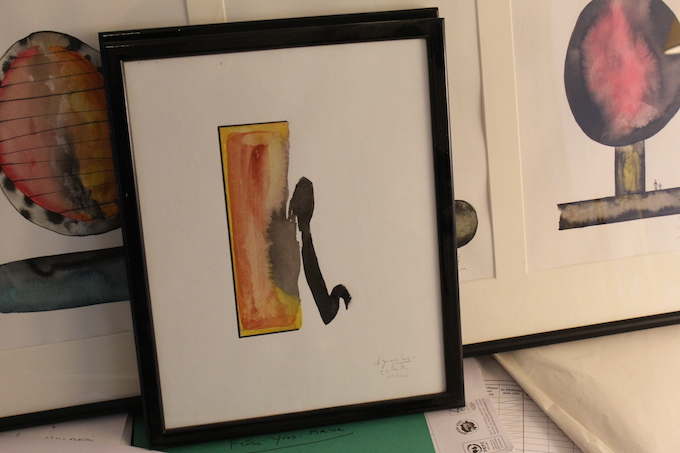 Maybe that is the driving force why Yves-Marie is so deeply engaged with his fellow Niçois artists. He loves interacting with them – in person, through Social Media (yes – Father Yves Marie has a Facebook page and a presence on Second Life!), and in spiritual communion. There is for instance the Christmas Mass, an amazing hybrid of physical and virtual interaction, realized in close collaboration with painter Patrick Moya. And every Ash Wednesday, he presides over the famous Messe des Artistes. A highlight in the annual ecclesiastic calendar, the artist’s mass is a time-honoured institution based on the Vow of Willette, a Parisian painter who in 1914 pledged to hold an annual mass in recognition of his recovery from a grave illness.

This year’s mass honored the centennial of Willette’s Vow. Yves-Marie, as bursar of the chaplaincy to the artists, convoked more than 50 of them at St. Pierre d’Arène in Nice to showcase local painters, sculptors, and iconographs, among them such outstanding ones as Patrick Moya, Patrick Schumacher, and Catherine Rigal. These works represent some of the best plastic arts the French Riviera has to offer, and are still on display at the church until the 30th April. 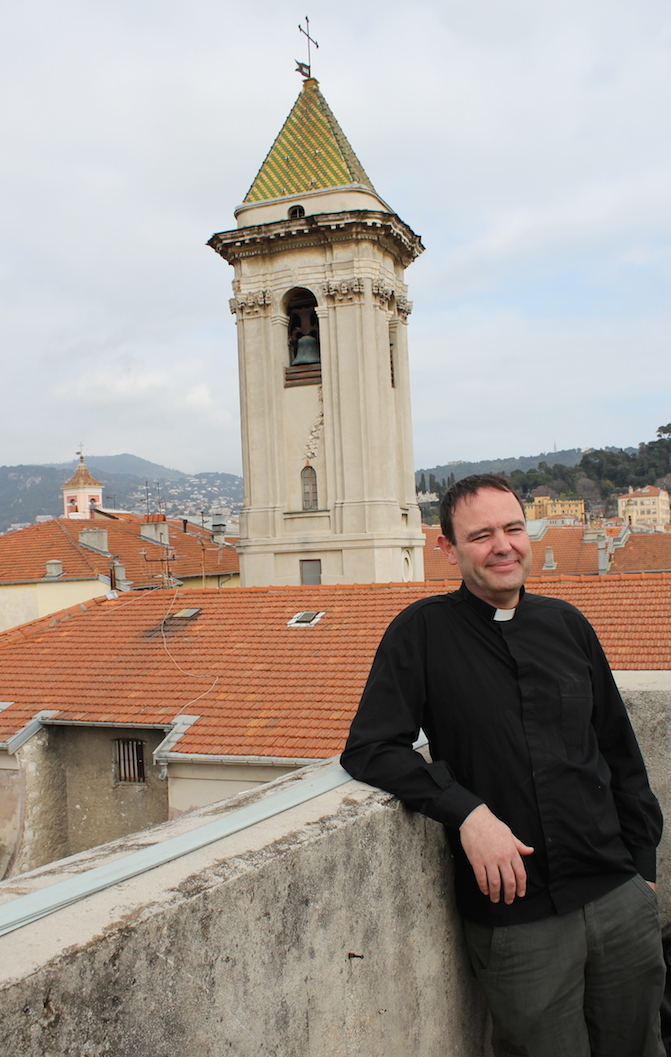 Packed to standing room only, the mass was a beautiful mélange of a traditional service and artistic contributions of many different genres. Actor/director Marc Duret recited Willette’s Prayer and read Jules Renard’s Letters from Father to Son, and musical performances spanned a wide range from violoncellist Bruno Posadas of the Philharmonic Orchestra of Monaco to violinist Natacha Triadou, soprano Valerie Marret, tenor Franck Asparte, and cabaret singer/actress Isabelle Servol.

This is the very ambiance that Yves-Marie thrives in. Every detail of the Mass is well-thought-out and designed to shine the spotlight on the arts, right down to his festive chasuble de Nivese, made specifically for the occasion to express a reflection, a spirit. With the 2014 Mass barely over, his thoughts are already going to next year’s. There is still room to improve on some details, it could for instance be more inclusive of the international community of the French Riviera, maybe have contributions in different languages, or be more ecumenical, he muses. In any case, the main theme will again be on artists and their influence on the world, and on all of us.

It was Greek philosopher Plato who said that love is the child of need and abundance. To Yves-Marie, this is exactly the spirit the Mediterranean reflects. Both need and abundance are great, materially and immaterially, existing side by side and making Nice what it is. Nowadays, he wouldn’t dream of leaving this city anymore. He has found his spiritual, artistic, and physical home here. And Nice is blessed to have Yves-Marie – an accomplished artist, a savvy manager, a smart social media whizz kid, and…. oh yes, a very cool priest.