For the upcoming fourth edition of the annual Shakespeare festival, TNN and OGC Nice are teaming up for an unlikely match. The winner? Everyone.

At first glance, theatre and sports do not seem to have much in common. But TNN director Irina Brook begs to differ. Her declared mission is to democratize theatre to all social classes and ages and in her quest to do so, she is continually looking outside the box. Realizing the power of football – or soccer to our American friends – as the strong social glue across class, age, and time, she has long been dreaming of bringing the two worlds together. And it is finally happening: Her star player: none other than William Shakespeare, and her partners on this first venture: OGC Nice, the First League home team which successfully plays in European tournaments, and passionnement tnn, the club of some 80 local entrepreneurs which has been supporting the TNN since November 2016 in its outreach to different audiences. 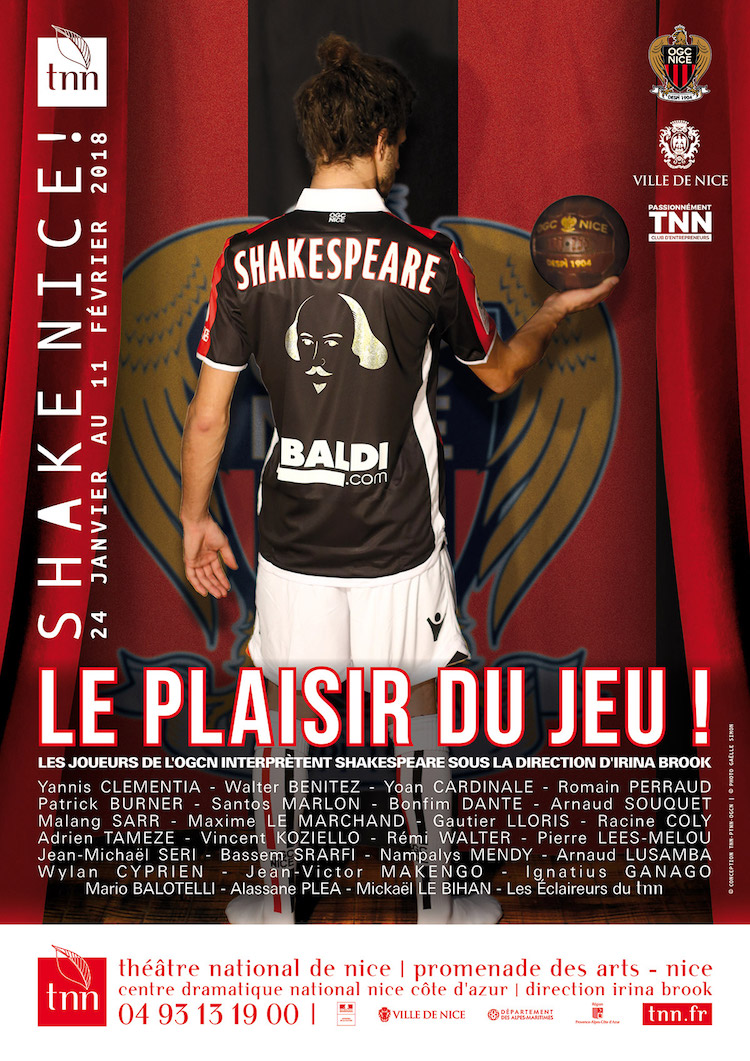 Ye olde English bard actually seems to have been quite the sports fan. There are multiple references to it throughout his plays. Tennis makes a frequent appearance, and occasionally even football. “Am I so round with you as you with me, that like a football you do spurn me thus?” Dromio wants to know of Adriana in “Comedy of Errors”. It seems therefore only natural to bring the OGC Nice / TNN venture to life during the upcoming shake nice! festival from January 24 through February 11.

24 Aiglons, as the OCG Nice players are affectionately known, were willing to trade the pitch of the Allianz Arena for a place in front of TNN videographer Gaëlle Simon’s camera for a day, each reciting a Shakespearean quote. If initially somewhat hesitant and feeling as if they were on their way to a dentist’s appointment, they mastered their task unexpectedly well. Yannis Clementia, Walter Benítez, Yoan Cardinale, Romain Perraud, Patrick Burner, Marlon Santos, Bonfim Dante, Arnaud Souquet, Malang Sarr, Maxime Le Marchand, Racine Coly, Adrien Tameze, Rémi Walter, Pierre Lees-Melou, Jean-Michaël Seri, Bassem Srarfi, Nampalys Mendy, Arnaud Lusamba, Wylan Cyprien, Jean-Victor Makengo, Ignatius Ganago, Mario Balotelli, Alassane Pléa, and Mickaël Le Bihannd may perhaps not wind up on the stage after the end of their active sports career but they were surprised indeed to find out just how much of Shakespeare there is in our everyday speech. The TNN recently presented a short sneak preview of the full video which will debut on January 25:

Football federates, and so does theatre. Theatre is not reserved for the intellectual elite, it is just as much an enjoyable pastime for kids from problem areas, as Irina Brook’s ongoing outreach has so often proven. And there is certainly no reason to fear Shakespeare. “If you are tired of Shakespeare, you are tired of life,“ she says, borrowing the well-known saying about London. “In France, people don’t sufficiently understand that he is a writer who talks about today’s society with a humanity which you hardly find anywhere else.”

Benjamin Mondou, president of passionnement tnn, also believes that the shake nice! festival is an excellent hook to draw in especially the young audience, and even more so if their sports idols so enthusiastically support the endeavour. And OGC Nice manager Jean-Pierre Rivère adds that the common denominator between football, the entrepreneur’s club, and theatre is passion and the desire to share it, which is why the entire club has thrown its full support behind the project. 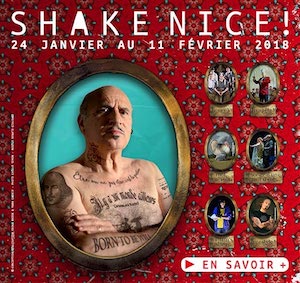 The fourth annual shake nice! festival, which Irina Brook instituted upon her arrival in Nice 2014, is yet again packed with theatrical jewels:

It opens on January 24 with Antic Disposition’s Henry V, set in a field hospital in the vicinity of the battlefields of World War I. This play, winner of the 2014 Peter Brook Equity Ensemble Award, will be performed in English with French surtitles.

Close in its wake, Tempest! surges forward: at its helm is Irina Brook who directs the Éclaireurs with Renato Giuliani, in a performance where burlesque rubs shoulders with fairy magic and where romanticism and the esoteric come together. Played in French on several dates, the premiere on January 26 will be surtitled in English.

The charm offensive doesn’t stop there… Malvolio, the character humiliated in Twelfth Night, reveals all to Nice audiences in his funny and touching one-man-show, I Malvolio by Tim Crouch. A Midsummer Night’s Dream also takes up residence. The Shakespearean classic leaves us spellbound with its blend of song, music and wit. A passion for words unites us in William’s Slam. This moving show combines Shakespearean texts and modern-day slam. The festival ends with a flourish: Freestyle!, an educational project led by Irina Brook to inspire local youngsters to bring their own keen slant to two monuments of Shakespearean theatre, tackling A Midsummer Night’s Dream and Romeo & Juliet.

For programme details and information on other events around the festival visit the TNN website.

“There is no such sport as sport by sport o’erthrown”.
Shakespeare, Love’s Labour’s Lost, act 5, sc.2