Sir Arthur Conan Doyle’s canon of four books and 56 original stories about the “consulting detective” wasn’t enough for Collectif La Machine, so they added on to it…

Over the nine years of its existence, Collectif La Machine – one of Nice’s premier theatre company under the reins of uber-talented director Felicien Chauveau – has carved out a fine reputation for revamping literary classics, typically centering on a troubled title hero. After Kafka, Peter Pan, Dracula, Don QuiXotte, and Gargantua, it’s now Sherlock Holmes’ turn. If the British detective seems rather benign in comparison to some of La Machine’s more sinister characters, La Machine sure knows how to tease out the hidden facets of his personality … Playing at Théâtre Anthéa in Antibes from January 8 through 25 and at Espace Magnan in Nice on February 7 and 8, Sherlock Holmes, Au Nom de la Reine is one of the first 2020 highlights in the region.

The 19th century, which has just given painful birth to the industrial revolution, is nearing its end, plunging the British capital into an ever-thickening fog. Sherlock Holmes (virtuously well played by Guillaume Geoffroy) is a restless private detective who brilliantly solves the case known as “A Study in Scarlet” with the help of his new roommate Dr. Watson. Now famous and well-established, he becomes a consultant for Scotland Yard, which is struggling to track the sprawling criminal machinations of a mysterious secret organization. In order to thwart the infamous professor Moriarty’s Machiavellian plans, Holmes has to resist the considerable charms of the bewitching Irene Adler (Bénédicte Allard). He finds himself drawn into in a chase as comical as it is terrifying, with his own downfall seemingly the only possible outcome…

“Adapting Sir Arthur Doyle’s masterpiece for theatre meant climbing the mountain of Holmesian works with a goal to reach the culminating point imposed by the author: questioning modernity,” self-avowed Anglophile Felicien Chauveau explains his artistic vision. Steam engine chases and vigorous umbrella fights set the pace for this affair covering four mythical stories of Sherlock Holmes: A Study in Scarlet, The Red-Headed League, A Scandal in Bohemia, and The Final Problem. And to keep the identity and integrity of this ever so British classic intact, the director has not shied away from sprinkling some English throughout this French language play. 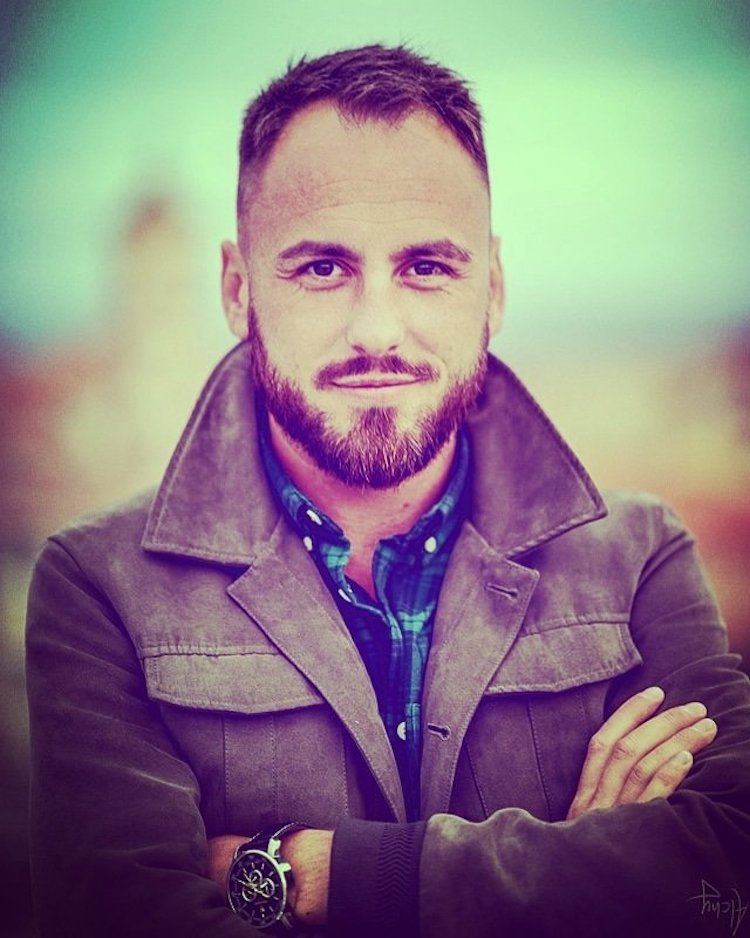 It took Conan Doyle more than thirty years to complete his masterpiece. This provides a unique perspective, watching Sherlock and Watson grow and mature through different stages of their lives. Their characters become hybrids of Indiana Jones, OSS 117, and Kingsman, says Chauveau, and he further explains his vision in a detailed conversation:

Q: Conan Doyle’s canon comprises four novels and fifty-six original short stories. How do you interpret it and how did you write and adapt it into a play?

Felicien Chauveau: Before starting the adaptation, I tried to understand and internalize the Holmesian works. I read and reread the entire collection, as well as several essays analyzing Sherlock’s presence in and relationship to the life of his author, Conan Doyle.

After this essential and non-negotiable step, I started adapting the first novel, A Study in Scarlet: I had to simplify the narrative by first reducing the number of characters and selecting the key moments of the plot. The transposition of the novel to a theatrical text requires a great deal of rigorous writing which respects the original work and the author, as well as creativity.

But for this play, I did not limit myself to adapting A Study in Scarlet. I took liberty of creating a new story, rooted in all of Sherlock Holmes’ stories. This allowed me to focus on all the archetypes and characters of Sherlock Holmes’ “family” (Watson, Wiggins, Lestrade, Moriarty, Irene Adler, Colonel Moran…). It pays homage to the entire Sherlock Holmes universe! 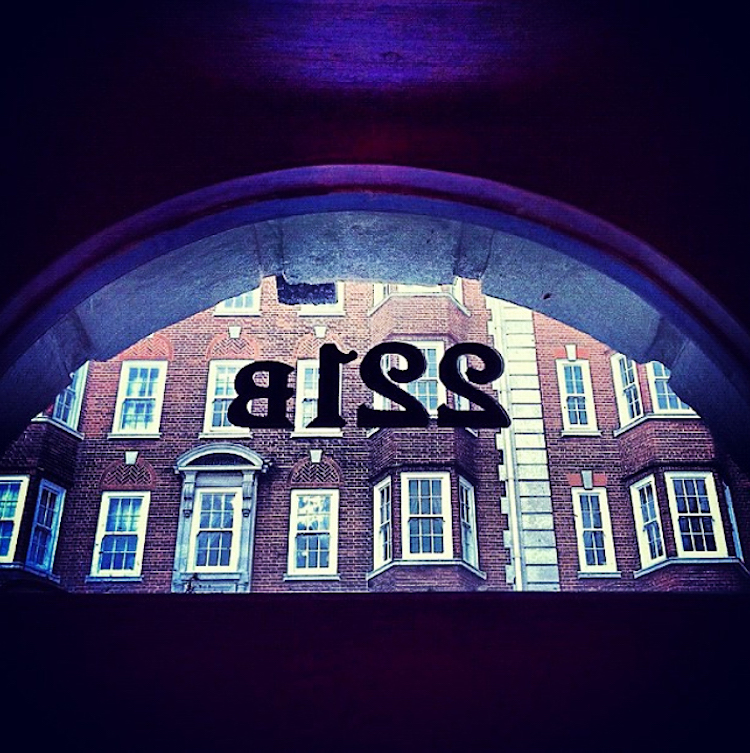 Q: So in this piece you both adapted and created, as a dramaturg and director…

F.C.: I tried to remain faithful to the world of Sherlock Holmes and not to frighten off the character’s “fans” (and there are many of them). This new story is not really a brand-new one but rather an amalgamate of various Holmes stories (The Adventure of the Bruce Partington Plans, A Bohemian Scandal, The Redheaded League, The Giant Rat of Sumatra, The Final Problem, The Hound of the Baskervilles, etc…) – I wouldn’t be able to list them all!

As for the writing and the characters’ identification, I focused on what constitutes their identity. They each have their own verbal signature. For example, Sherlock’s vocabulary is forensic and scientific throughout. Not everyone understands it, and that’s alright. Dr. Watson’s way of talking, on the other hand, is simple and accessible but outdated, reminiscent of the Victorian era. Wiggins speaks typical street kid slang. And Detective Lestrade’s lines recall good old-fashioned cop films, “It’s about time you arrived! Come on, let’s go!” 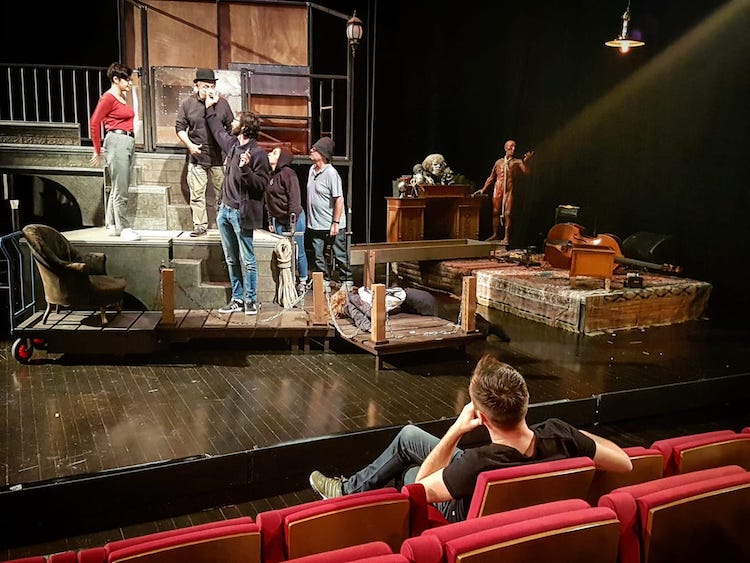 Q: Sherlock Holmes has been translated from English into French multiple times. Do you keep elements of the original language in your play?

F.C.: Yes, the original language is important for the identity of the characters and the Holmes universe in general. So I kept some English words to remind myself of this language shift. Of course I chose words that are understandable to the general public who are not bilingual, for example, “breakfast”, “tea-time”, “perfect”, etc…

The play’s quintessential Englishness is also the red thread that runs through the entire visual world that we imagined: the decor that reminds us of old docks, the costumes, the colours…

Q: Sherlock Holmes is a fictional character who has been frequently represented in the movies and adapted many times for television. Was your creation inspired by some of these adaptations?

F.C.: Yes, I was influenced by many of them. A small, non-exhaustive list: On YouTube, there is a whole series of films available shot between 1937 and 1945 with Basil Rathbone in the title role (The Man Who Was Sherlock Holmes by Karl Hartl – The Hound of the Baskervilles by Sidney Lanfield – Sherlock Holmes by Alfred L. Werker – Sherlock Holmes and the Secret Weapon by Roy W. Neill…). These films are not “must-sees”, but they gave me some references. There is also the Sherlock Holmes series (also available online) with actor Jeremy Brett. Even if past its prime this series still played a role in the mythology of the character.

The final scene of the Disney movie The Great Mouse Detective is very well done! It is an adaptation of a children’s book: the story of a mouse living at 221b Baker Street and pretending to be Sherlock Holmes. Among recent productions, there is of course also the saga directed by Guy Ritchie with Robert Downey Jr. and Jude Law with its perfectly chiseled dialogues.

Q: How do you see the relationship between Sherlock Holmes and Watson?

F.C.: Watson is the narrator of Sherlock Holmes’ adventures, so I worked on Watson’s fascination with the detective. For Watson, Holmes represents the figure of a mythical and mysterious hero, and for Sherlock Holmes, Dr. Watson gradually turns into the only friend he will have in life. This relationship helps Sherlock Holmes to become more human.

F.C.: He is misogynistic, so he sees Irene as useless and uninteresting. However, his opinion evolves as the investigation progresses, and as he realizes that this woman is probably the key to solving the case. Irene Adler forces Sherlock to look at women from a different perspective. This is a subject that I feel is essential to raise today! 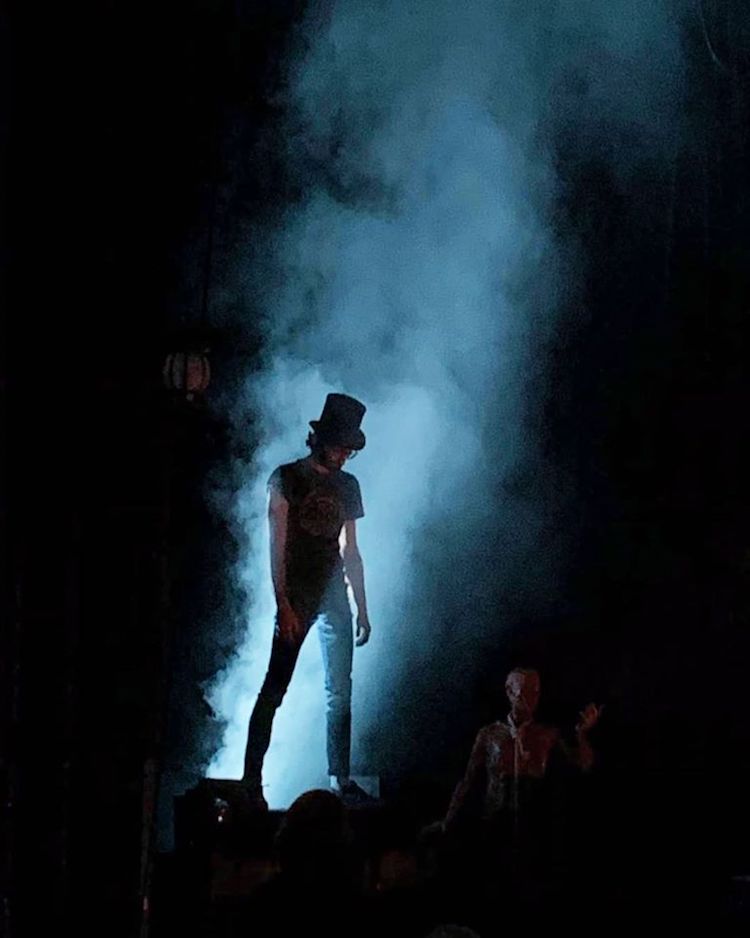 Q: Investigations take place in several locations. How are these different environments represented?

F.C.: We decided to situate the action in the port of London. Places of commerce, trade, dark alleys are all conducive to the staging of detective novels. Based on this scenography of the London docks, we envisaged a realistic but poetic setting. For that, we tried to give the illusion of several locations by segmenting the scenography. We also tried to revive the period of Sherlock Holmes’ investigations through visual cues, both through the set as well as the costumes. The play takes place in the Victorian era, specifically between 1890 and 1904.

Q: The sound landscape occupies an important place in all your creations. What did you envision for this new play?

F.C.: Music is indeed a very important element in any Collectif La Machine play. It punctuates the story, the narrative, and its rhythm. Here, a bass player is present on stage and symbolizes Sherlock Holmes’ violin (because he is a violinist). This brings a certain lyricism but also a good dose of rock that gives rhythm to the dialogues. We are also fortunate to have singer-actress Bénédicte Allard in the role of Irene which obviously adds extra value to the musical creation. Apart from the live music, we also worked on a soundtrack with Fabrice Albanese. This soundtrack allows us to create different atmospheres to push the audience’s imagination beyond the scenography.

Co-founded in 2011 by Felicien Chauveau and Benjamin Migneco – himself one of the most talented French actors of his generation – Collectif La Machine is French avant-garde theatre at its finest, balancing dark, provocative and witty elements with great ease. The core cast is often complemented by illustrious guest actors, like in this case the extraordinary Paul Chariéras in dual roles of Inspector Lestrade and Colonel Moran.

Daniel Benoin’s Anthéa theatre has been a loyal supporter and producer over the years, providing La Machine the opportunity to create shows of substantial physical and technical complexity. And Espace Magnan has also welcomed the company since its beginning. Needless to say therefore that this newest production will play almost back to back at both venues. And even if the year is still young it is quite safe to say that like every other show bearing the Chauveau signature, Sherlock Holmes – Au Nom de la Reine will rank among the unmissable plays of 2020.

I consider that a man’s brain originally is like a little empty attic, and you have to stock it with such furniture as you choose. 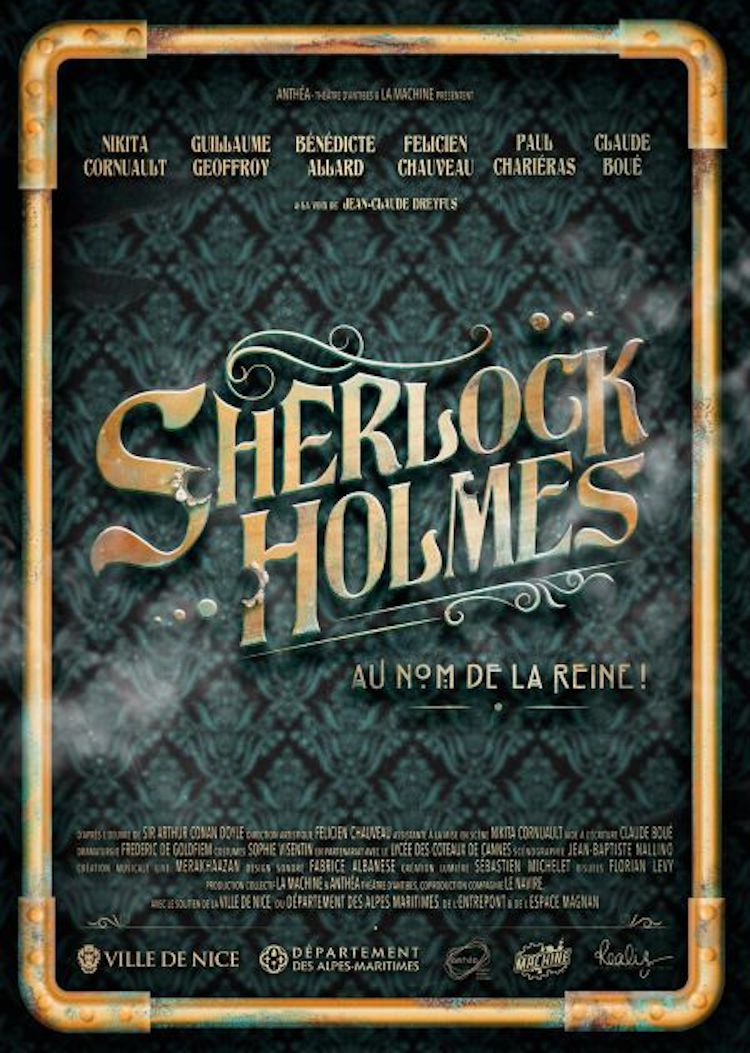 All photos courtesy Felicien Chauveau except photo of 221b Baker Street from inside by Gercanno – Own work, CC BY-SA 4.0, Link