The Anthéa house company, renowned for its creativity and ingenuity at the crossroads of stage theatre and cinema, gives Alexandre Dumas’ classic a shocking, and shockingly good, makeover

The year is 1815, despotic emperor Napoléon reigns supreme in France. Edmond Dantès, a young former first mate on a ship who bravely stepped into the role of captain when that one died, is betrayed by a jealous “friend” and falsely incarcerated, but manages to escape against the odds many years later. Or… maybe the year is 2022. Dantès is a metaphor… the aggregate of all ambitious and hardworking people in the world, sorely let down by their governments, and stopped in their tracks by ever-increasing political pressure. What solutions do they have at their fingertips to flee from their invisible prison and get even with a cruel fate?

Collectif 8, one of the region’s premier companies, seeks to find the answer in its interpretation of the 19th century classic Le Conte de Monte-Cristo, taking a contemporary and surprising look at Alexandre Dumas’ epic work. The play, as timeless and fluid as any of the company’s works, is currently scheduled at Anthéa in Antibes through 22 January 2022.

Quick recap of the original story: A victim of slander, Edmond Dantes spends fourteen years languishing in a prison in the Château d’If in the heart of the Marseilles harbour before escaping and seizing a hidden treasure that this cell mate, Abbot Faria, has revealed to him. Now rich and powerful, Dantes poses as the Count of Monte Cristo and sets out to take revenge on those who have wrongly accused him.

Outside his 19th century literary context, C8’s modern-day Monte Cristo is less on a quest for revenge and self-delivery than he is trying to rid himself from certain political and social patterns that are still relevant: corrupt bankers, lawmakers, military, and speculators, and all their intrigues to bid for power in a flawed judicial system that is far from blind. 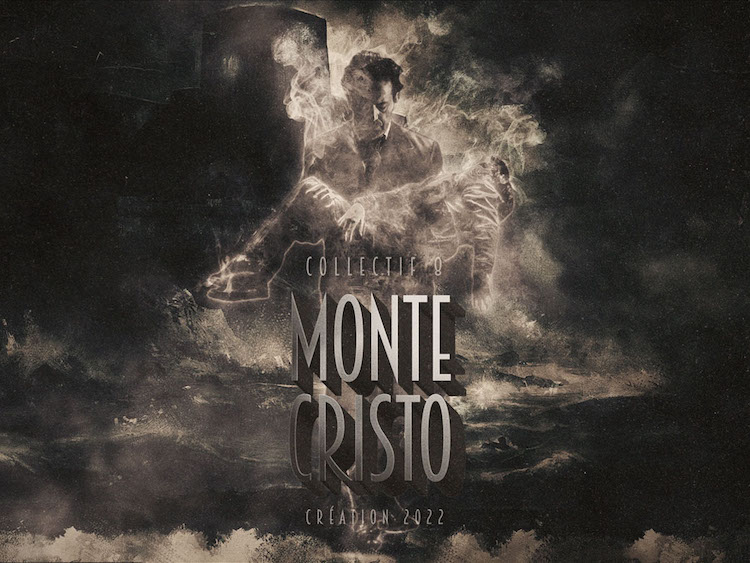 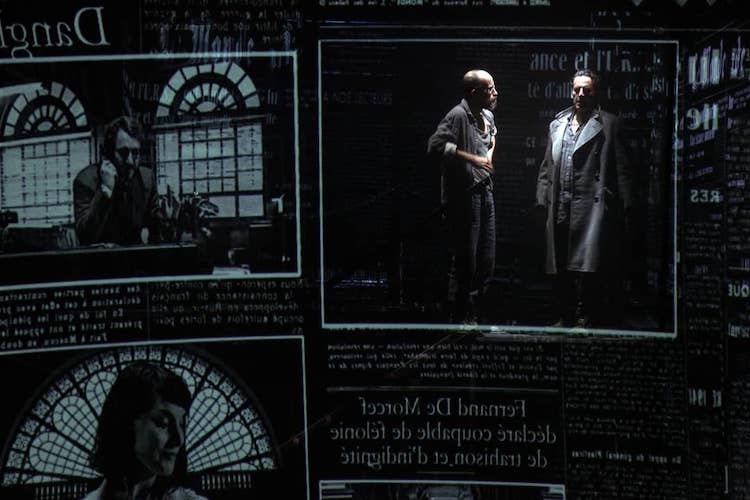 Emprisoned, Edmond Dantès and Abbot Faria ponder their future. Crushed by a legal machine against which he is powerless, Edmond Dantes plots his escape, and a Machiavellian revenge plan unfolds before our eyes. While his initial debates with Faria are still rooted in intelligence and education, we witness him gradually wading deeper and deeper into fantasies devoid of all reason, just driven by the burning desire of revenge for the wrong he suffered. But personal justice is never free of collateral victims, and the consequences will be tragic for the Count of Monte Cristo. They forcefully hold up the mirror of our contemporary reality, its media lynchings, rigged social networks, and the innocent ones that popular vindictiveness throws to the wolves.

But as the story unfolds on stage you begin to wonder: is this really happening? Do Dantès and Faria really share a prison cell and plot an escape plan for the young sailor, who then gets even with the establishment? Or does this prison just exist in the imagination of a man in solitary confinement, talking to himself as if there was someone else in his cell? The story is intentionally left open to interpretation. But the mindful spectator will find subtle dramaturgical clues throughout… 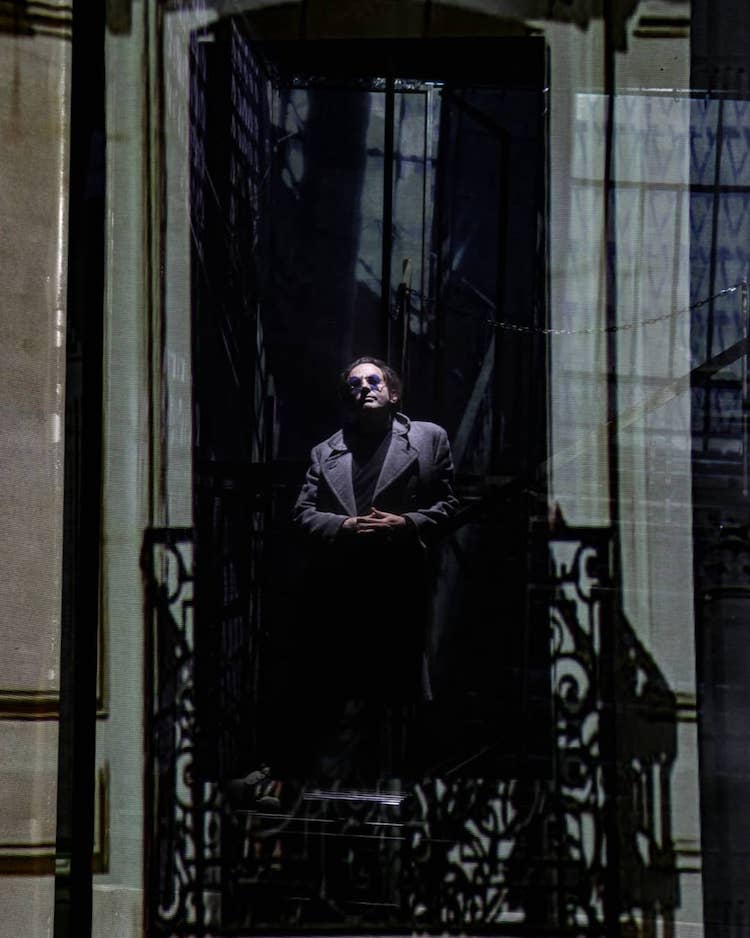 In choosing this approach, Collectif 8 represents the ordeal we all, but especially the young, have been subjected to since the beginning of the first pandemic confinement. Cut off from the outside world, reduced to keeping ourselves company, muzzled, pushed to and fro as it suits those who hold sway over us. No, do not misinterpret this statement – medical science has its firm and undeniable place in this world, and conspirators only throw wrenches in the wheel. But that does not change the fact that we all have been subjected to a mental prison of sorts by those in various positions of power.

Piqued but undeterred by the fact that theatre workers like herself were declared “non-essential”, Gaële Boghossian used her own pandemic-imposed confinement wisely by revisiting Alexandre Dumas’ epic novel. She read her way through the entire six volumes on 1,600 pages, a pad with a diagramme next to her where she plotted the characters’ relationships and experiences. “For me, Dumas has left behind an enigma, and that has held me in its grip for many years,” Gaële Boghossian explains her artistic vision. “The more I pulled the interwoven threads of this complex canvas apart, the more I had to face the challenge of filling in the gaps to respond to this invitation to understand the world.”

It was an enormous challenge, but not one that she and Paulo Correia, the two creative masterminds behind Collectif 8, would shy away from. She adapted and directs the show in tandem with Paulo Correia, who plays the part of Dantès and also signs responsible for the elaborate video creation. Together, they explore this dark novel and its universe, which is as titillating as it is an ugly reflection of society.

“The key to the mystery is found in a dungeon in the Château d’If. It is here that Monte Cristo meets Abbé Faria, the scholar, the creator, the instrument of hypothetical destinies. He teaches, enlightens, and gives birth to a range of possibilities. He draws plans, maps and formulas, from set situations to variable choices, from consequences acted upon to chain reactions; visions of past and future life itineraries emerge. On the walls of the dungeon, Faria’s lines, drawings and diagrams come to life in strange hallucinations revealing the forecasts of possible variants of the great History.”

Gaële Boghossian’s adaptation pares the multitude of characters in the original novel down to the core: the connection between the title hero and his mentor. She admirably masters the highwire act of keeping the text complex and digestible at the same time. The characters of Dantès and Faria are authoritatively carried by Paulo Correia and Damien Rémy. Both assume their parts brilliantly; flawlessly mastering enormous texts, and their raw corporality conveys every emotion, every fear, and every glimmer of excitement as much as the words do.

Paulo Correia is also the genius behind the video and mapping creation, which is nothing short of stunning. The way he uses verticality, blends stage theatre and cinematography, brings digital characters to life, and transcends epochs, class, and locations, is an absolute master class in “cinéâtre”. Supported by a backdrop of jazz music composed and performed by the brilliant Benoît Berrou, and the extraordinarily symbiotic sound and light work by Tiphaine Bureau and Morgane Attento, this play is worthy of Anthéa, the second House in France after the Comédie Française in Paris. 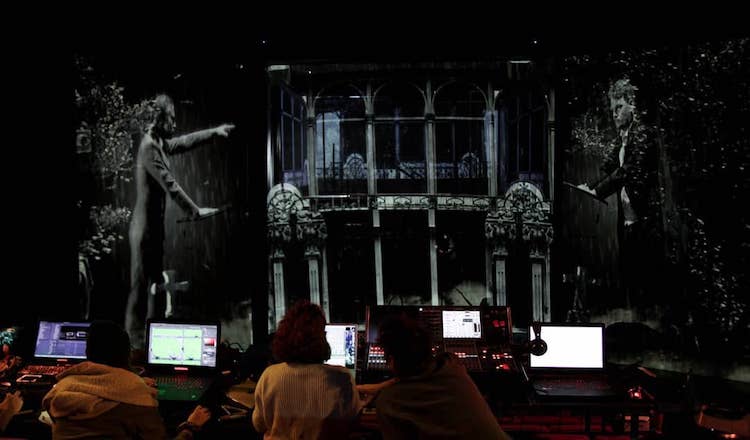 Le Comte de Monte Cristo, Collectif 8’s seventeenth play, proves once more why Collectif 8 has rightfully been regarded as one of the top companies in France for a number of years now. They just go from strength to strength under Anthéa’s director Daniel Benoin who has given his house company free artistic reign and generous logistic support. Anyone who has seen the adaptations of Orwell’s 1984, Kafkas’s Le Chateau, Goethe’s Faust, or Marivaux’ L’Île des Esclaves – to name but a few – is familiar with the hallmark blue, grey, and black colours of stark scenographies, contrasted with Paulo Correia’s ever-increasing prowess in creating a cinematographic universe. Gaële Boghossian invariably brings complex classics into a contemporary context with rare mental clarity, forcing not only the characters on stage but everyone in the audience to ponder inconvenient questions and truths in an ambience somewhere between dark fantasy and delicate poetry. And the creative and technical talent Collectif 8 can draw on is remarkable, and the envy of many a Parisian company.

What is most striking, however, is the iron discipline and absolute professionalism Collectif 8 and its collaborators eat, live, and breathe. They will not rest until everything, down to the minutest detail, is utter perfection. But never at the expense of emotions and heart. This is hard in the best of times, and a thousand times harder under the current circumstances. Trust Collectif 8 to pull it off.

Le Conte de Monte-Cristo – another Collectif 8 masterpiece that you will not want to miss for anything!

All sanitary measures in force at the time of your visit apply.