For its latest masterpiece, Théâtre anthéa’s house company tackles Le Château, one of the most complex literary texts ever written, with tremendous success

Kafka, it is said, is one of the most unplayable writers ever. That fact is probably rooted not only in the author’s free-roaming train of thought, but more likely even that he never wrote with theatre on his mind. And yet, every theatre maker worth his or her salt gives him a try, some with more success than others. Beyond deciphering Kafka’s vacillation between realism and the fantastic, his mockery of a post WWI-German society caught between bourgeoisie and libertinism, and his troubled personal history as a Bohemian Jew at the politically and religiously precarious triangle of Prague, Munich, and Vienna, it takes a tremendous amount of artistic intuition and savoir-faire to do the author’s work justice while making it pertinent for today’s reality and palatable for the audience’s taste.

But if there is one specialist in dissecting this level of convolution, it is Gaële Boghossian, the heart, soul, and face of Collectif 8. Now, saying this does not take away in the slightest of any of the company’s other theatrical disciplines which are executed with immense accomplishment – scenography, acting, video, sound landscape, lighting, and costumes – but the more plays Collectif 8 creates, the more Gaële’s raw genius becomes apparent. Already a master of reinterpreting Anglosaxon and French literature, she surpasses herself yet again in turning Le Château (The Castle / Das Schloss) into a tale that skillfully weaves the Kafkaesque universe of the abstract into the fabric of biting neo-realism. 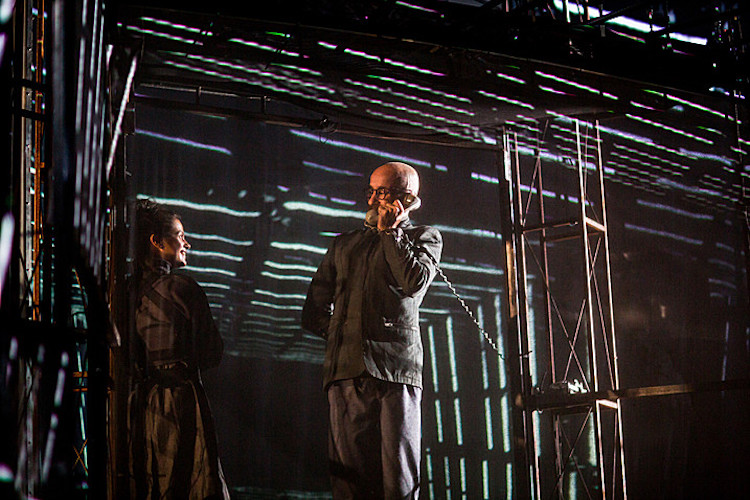 The story is narrated by a character only known as K., who appears at a village inn one night. He claims to be the new surveyor, appointed by the castle authorities. From the outset, his statements are questioned. K.’s first attempt to access the castle in order to take up office ends in failure. He returns to the inn where he meets his future assistants as well as a certain Klamm, who delivers a message from his contact at the authorities. Things take a strange turn when K. falls in love with Frieda, who claims to be Klamm’s mistress…

One can never be certain because Franz Kafka died of tuberculosis before finishing this piece but his editors and translators throughout the 20th century believe it was the author’s quest for an unavailable God, along with a pointed critique of anti-Semitism.

If the theme of “God” transpires yet again in a Collectif 8 play, this is not by accident. With its diptych Faust/La Religieuse, the company had already gone back to the sources of our collective memory by exploring the human construct of “God”. It therefore seemed natural to Gaële Boghossian and Paulo Correia to take a renewed interest in societal organization. Who is Klamm, that invisible inaccessible being that K. seeks to reach, if not a divine being who would bring all the answers that the hero desperately seeks? Who are these civil servants, dedicated apostles of invisible authority?

“As we examine the meanderings of our current society and its origins, addressing Kafka seems essential to us today. Isn’t this relationship with God illustrated in Kafka’s work? Our administrative and political system can clearly be read as an extension of the one built around a religious entity,” Gaële explains the angle of her work. 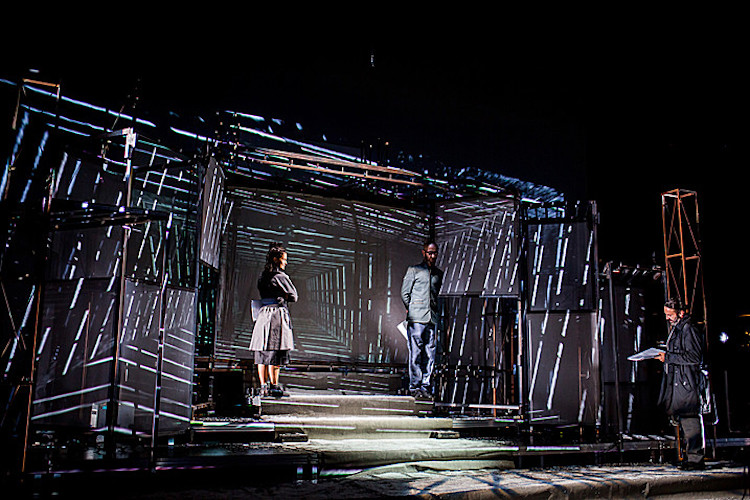 Le Château explores a dehumanized society where individuals are interchangeable with their immutable and sacred functions. The theatrical adaptation of the novel is based on this circular construction, on this universe that revolves around itself in its implacable rotation. The particularity of the characters surrounding K lies paradoxically in their similarity. The loss of identity that gradually takes over the hero’s identity is already present in the faces he encounters.

The scenography represents a labyrinthine ensemble, a structure where the actors have to evolve with the help of harnesses, stretched towards the top of the structure where the mysterious power resides. Music and video create an immersive world, taking over the sensory relay of the action.

This new coproduction with Théâtre Anthéa once again proves why Gaële Boghossian and Paulo Correia have become – under their mentor Daniel Benoin’s skillful guidance – one of the top acts in the French contemporary theatre scene. Trailblazers of cinéâtre, the marriage of theatre and videography which they have created and defined, they have yanked classics from dusty shelves and breathed new life into them by framing them against the harsh reality of the 21st century. Artful and aesthetic as their plays are, Collectif 8 continually pushes the envelope, confronting the audience with critical existential questions and forcing them to look reality square in the face.

In Le Chateau, we meet “old acquaintances” like Mélissa Prat (whose superb performances in Faust, George Dandin, L’Ile des Esclaves and L’Homme qui Rit have burned themselves indelibly in theatre goers’ minds), and first-time collaborators like Damien Remy. Paulo Correia’s videography borders on brilliance, as he has proven time and again, but he also steps on stage himself. Benoït Berrou’s sexy-and-sensitive sound landscape and Samuèle Dumas’ intelligent lighting design…. both of these accomplished artists have frequently worked with C8 and possess that je ne sais quoi that just rounds out the production to perfection.

The common point is always a political message, political in the original sense of the Greek word, “polis”: the city. For me, the stage is a vital platform in today’s world when the media are becoming increasingly obscure and unreliable in the eyes of the population, and where social networks overwhelm minds with clichés and poorly digested populism on subjects too complex to be discussed without thought and profound argumentation. The stage is a political act in the strongest and broadest sense. This in no way excludes lightness, but the challenge it represents holds us accountable to make it rigorous and meaningful exercise. These great works by visionary authors in their societal analysis are extremely readable bridges between our past, our present and our future. They constitute the basis for very pertinent reflections on the evolution of humanity thanks to the hindsight necessary for the observation they present.

In a few words, tells us about the essence of Le Château

The character of K arrives at a hotel announcing himself as a surveyor hired by the village castle but the question of his employment as a surveyor appears extremely vague. Everyone seems to be aware of his arrival but everyone tries in their own way to contain him in their territory. Some seek to create alliances with him, others establish a “security perimeter” from which he cannot escape. K is looking for answers. To do this, he will put in place all sorts of strategies to reach the one who seems to hold power in this place, a certain Klamm, a mysterious figure that everyone fears without really knowing his identity. K will get lost in a dream of integration into a human society, a quest for identity and social advancement to the point of madness… The theme of memory is extremely present, as well as that of the alienation of the individual from the bureaucratic machine. But the story that touches me deeply is that of the eternal figure of the stranger who struggles in a society of which he wants to be a part at all costs but of which he does not master the codes and of which he will be eternally excluded whatever he tries to build.

Kafka often tells stories of men in modern society. In your opinion, is Le Château also a portrait of today’s society?

Undoubtedly. This work reflects a hierarchical, compartmentalized society, where incommunicability is the secret of an administrative dictatorship pushed to its paroxysm. The human being is crushed, drowned, annihilated. He struggles in an unfathomable labyrinth where each step forward is one more step entangled in the web of a society that will surround him until he suffocates, entangled in merciless immobility. 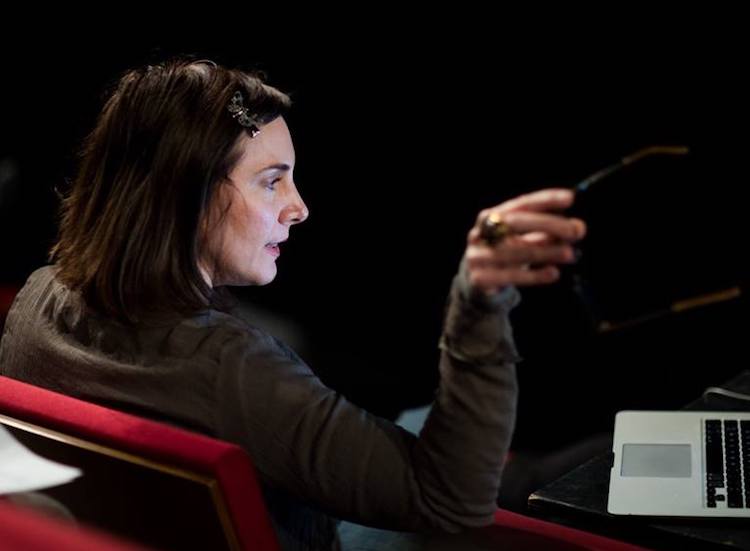 According to your interpretation of the work, have you established a link between the play The Castle and Prague Castle, the residence of Czech power since the 9th century?

Not particularly. I have focused on a universal vision that would bring together different possible interpretations of the work: a metaphorical vision of the state and administration, a mystical vision, and an autobiographical vision. Each of these visions is legitimate but incomplete in itself. Weaving the web of this plurality of visions has led to an extremely dense and dreamlike universe where reality and dream dialogue in a frantic ballet.

Kafka’s universe is often shrouded in a sinister, nightmarish, sometimes crazy atmosphere. In which universe did you want to anchor your adaptation?

For my part, Kafka’s universe is imbued with a humor of the absurd, it is a sharp criticism of our dehumanized societies. The situations there are disproportionately incoherent, close to madness. Drama contains humour, and humour contains drama. It is a situational humour that echoes the intimate experience of each of us… We laugh at what we recognize, what we have been able to experience a thousand times without having the filter to put it at a distance. The question here, as Kafka did in his writing, is one of exorcising our demons in a journey towards a spot where our reflection is both significant and de-dramatized.

Kafka’s story is inhabited by many characters. Are they all present in the room and on stage?

For the most part. For scenographic reasons, some have been coupled or put aside but a large number of characters remain present, symbolizing the multiplication of Kafka’s own personality, the incarnation of his fantasies and demons, and the crowd that leads him to an abyss that always keeps him on the margins of society.

Since its inception, Collective 8 has placed a high priority on the use of video and music. How did these elements serve this last creation?

The multimedia process is particularly rich in this creation. The creation of an opaque and luminous world at the same time, this flight towards absurd and insane situations… immersion is all the more necessary for a detachment of the intellect and to dive into the sensory, the sensual, and the release of a mind that allows an analysis under a sensitive and unrealistic angle. 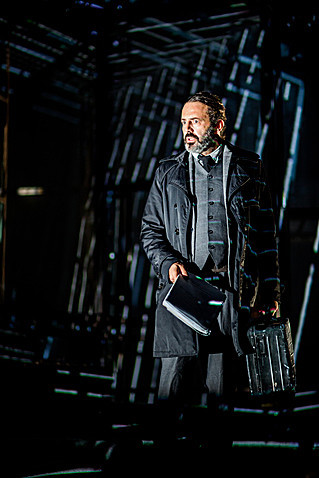 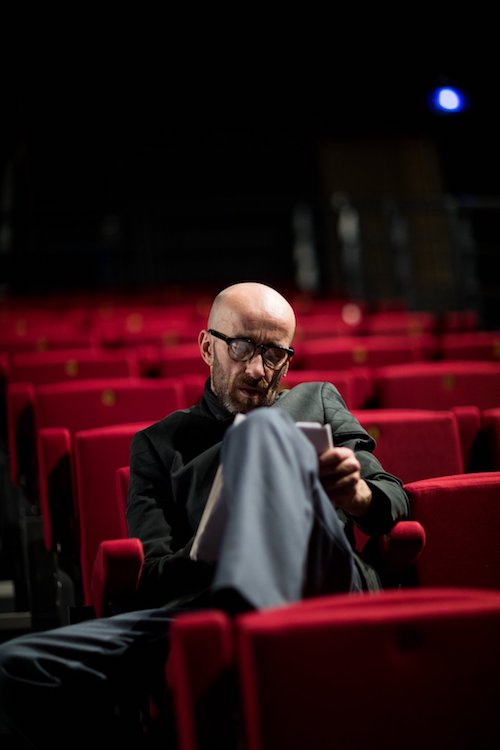 The settings of your previous shows are often spectacular, almost dangerous. What did you imagine for this last show?

The scenography symbolizes a perilous ascent into a hostile universe. Huge steps represent the steps of power, disproportionally large, high and wide, as far as the eye can see, as if this world were only made up of landings to cross, to climb. Artistic direction is built on the eternal alternation between ascension and fall of the myth of Sisyphus. The entire scenography represents a “realistic place”: an old warehouse where men and women would have been locked up, taking what is most precious to them in their suitcases: sentimental objects. Le Château / Das Schloss was written in the midst of the rise of anti-Semitism, long before the horror. The reference to this place refers to the Jewish genocide in particular but also in a more universal way, even today to all those eternal foreign men and women in a foreign land in search of shelter, a society of Men which may not exist (and is the Great Question of our times!), a refuge, an identity which they are denied and whose price they must pay.

Playing at anthéa from February 27 through March 14, Collectif 8’s Le Château promises to be a highlight of the 2018/19 season not just in Antibes, but wherever it will go in future.